This past Monday, Ariel Pink and The Black Lips kicked off their west coast tour at The Teragram Ballroom. While I was most excited to see The Black Lips, I was curious about Ariel Pink’s live set. Ariel Pink’s music was always more miss than hit with me but the guy is wildly popular and so I needed to see how it translated live. With an elaborate decorated stage setup hiding most of the band behind giant polka dotted mountains, Ariel — clad in pleather — walked on to the stage nursing a Stella, going into the first song. To me, this was as good it got as the rest of the set felt like a weak version of David Bowie meets Gary Glitter meets Todd Rundgren. Maybe I’m not hip enough to get what it is that makes Ariel so heralded, but it just goes over my head. Regardless of my feelings towards his music, most of the crowd ate it up. There were a few moments during the set that there was a bit of an exodus with groups of people bailing out early but I attribute this to the crowd being pretty much split between Black Lips fans and Ariel Pink fans.

Speaking of Black Lips, I had no idea what I was in for when the Atlanta based garage punk band kicked off their set. The Black Lips are raucous, LOUD, and wild. I certainly wasn’t prepared to be a few feet away from guitarist/singer Cole Alexander puking on stage in front of his amp. For a second there, I was afraid that this was going to turn into a “Stand By Me” moment, setting off a chain reaction of fans throwing up all over each other. After I managed to hold back my own vomit, it took me a few songs and a stage hand covering the spill with a towel, to get back in the groove with the band. The band is very much “punk” in attitude and musicianship, but the music is more garage rock than anything. This is why I’m always surprised when a mosh pit erupts behind me for these kinds of bands. Between the stage diving, crowd surfing, the smell of vomit, getting shoved from behind, and Cole’s BLARINGLY LOUD Fender Twin screaming directly at me, my senses were assaulted. After the show, I had really mixed feelings about the band; they’re good at what they do, they’re musically tight, they’re great performers, but it all seemed a bit too over the top for a garage rock band. Who knows? Maybe I’m just getting too old for this shit.

Check out the photos below of The Black Lips with Ariel Pink at The Teragram Ballroom. 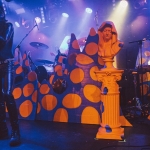 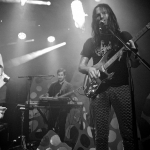 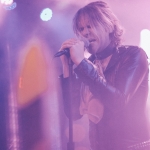 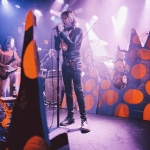 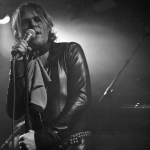 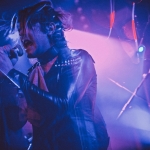 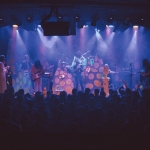 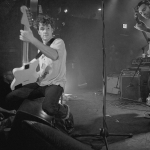 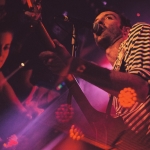 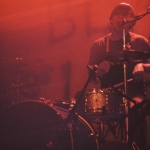 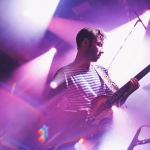 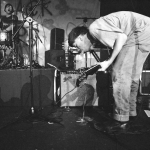 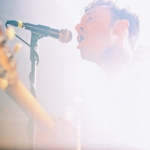 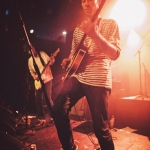 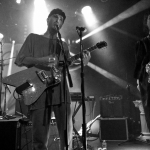 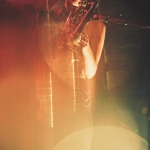 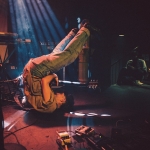 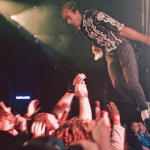 Listen to the Black Lips’ New Song, “Boys in the Woods”