An echo is a sound that reverberates and returns to the original sound-maker. Like when skipping stones, if the initial force isn’t strong enough, then the result will always be a disappointment. In a way, this can be the case at the Echo Park venue, The Echo; loudness is typically a necessity. On Tuesday night, Saintseneca’s opening act, Des Ark, suffered from their quietness until finding their rhythm and bringing the house down.

Des Ark are a four-piece band from the northeast, who went on tour with Saintseneca to support the latter’s newest album release, Such Things. They had a consistent songwriting style where they would start small, with soft melodies and little to no percussion, and give way to a passionate crescendo of drums and oohs. Unfortunately the crowd found it hard to pay attention. The murmurs around me drowned out the vocals at several points, and even got to a point where listening from inside the bathroom was better for the acoustics- the bathroom door shut out the noisy whispers coming from the audience.

The show was still a lot of fun as this was a talented group. Aimee Argote, Des Ark’s lead vocalist, bared her soul in her voice while keeping her range rather muted, similar to the style of Ida Maria. A few songs in, the synth came to the forefront, and reminded me immensely of Bon Iver, adding depth to their wonderful folk-ska hybrid. Their last song finally won over the crowd, but only because it forced everyone to shut up; the band picked up a banjo and acoustic guitar and sang their finale directly in the middle of the crowd, where everyone silently strained to listen in.

Saintseneca followed Des Ark, and kicked off with one of my personal favorites, “Happy Alone.” Last time I saw Saintseneca, Zac Little, the band’s founding member, had a prominent walrus mustache, and on Tuesday I saw that he had grown a bright red beard to match. His voice is what defines the sound of Saintseneca. They play defiant foot-stomping folk-rock, and his expert control over his midwestern twang and even more simply the volume of his vocals all add to the candor of the band.

Everyone was lined up at the edge of the stage for the duration of the show, only the drums hanging in the back as they projected their music proudly into the crowd. Occasionally the members would move around, trading instruments and switching mics, even at one point leaving the stage so Little could perform “How Many Blankets are in the World” solo. For the next song, only Maryn Jones (who you may also know as Yowler) came out to join him and the venue grew so quiet you could hear emo night at the Echoplex rumble below.

They ended their regular set with “Bad Ideas,” and a camouflage monster from the music video ran out of the green room onto the stage. If anything will reverberate with me after that performance, it’s the image of that furball dancing with those goofballs. 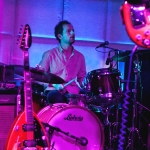 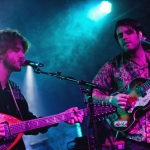 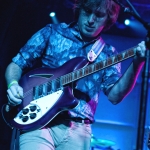 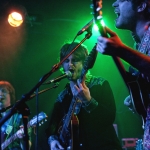 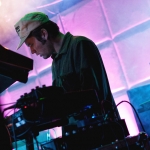 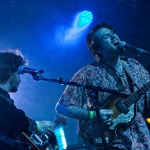 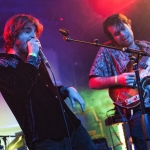 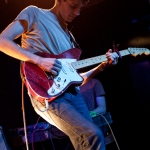 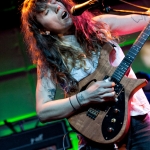 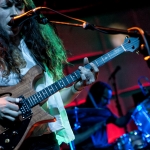 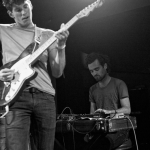 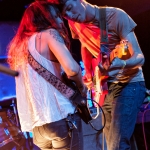 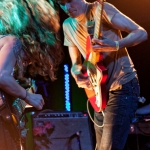 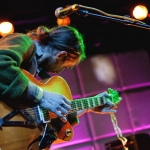 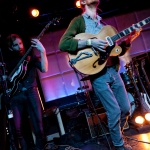 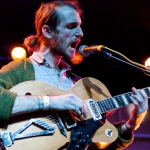 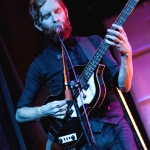 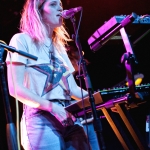 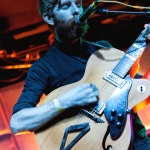 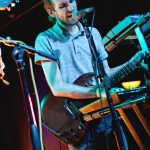 Des Ark – “Peace to you too, motherf*cker”

Jack Ladder Charms a Full Crowd at the Echo