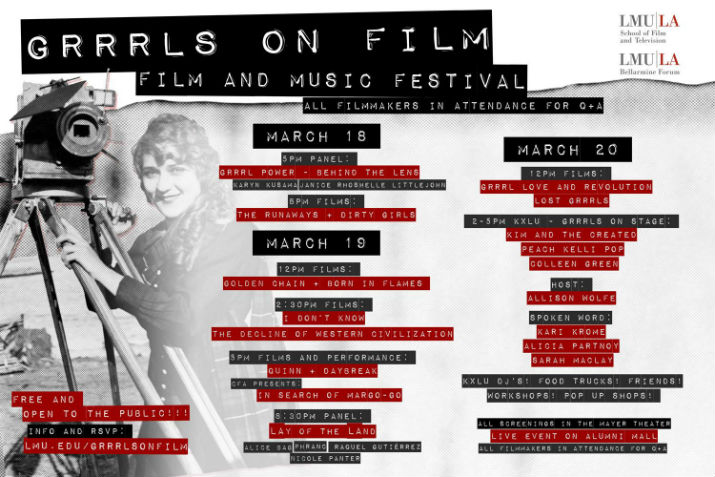 What better way to celebrate Women’s History Month than at Grrrls On Film, a three day film and music festival at Loyola Marymount University this Friday, March 18th through Sunday, March 20th. Grrrls On Film will feature some amazing feminist voices who will be sharing their stories and experiences via film, live music, workshops and panel discussions. Festival participants include Alice Bag, Kim & The Created, and Floria Sigismondi (The Runaways), just to name a few. For the full festival lineup check out the Grrrls On Film website.

We were lucky to chat with festival co-organizer Evelyn McDonnell and influential filmmakers Penelope Spheeris (The Decline of Western Civilization) and Vega Darling (Lost Grrrls), who discuss the inspiration behind the festival, punk rock, growing up in the Riot Grrrl scene and more. Read on!

GG: Tell us about what made you decide to organize Grrrls On Film. Why do you feel film and music are successful vehicles for raising feminism awareness and dialogue?

Evelyn McDonnell: Grrrls On Film is inspired by girl love and girl power. Sharon Mooney (co-organizer) and I met last year when she guest taught video editing in my Journalism class and we discovered a shared love of punk females an movies by and about them. Bands such as Sleater-Kinney, Bikini Kill, The Bags and Tribe 8, and movies like All Over Me, The Runaways and The Decline of Western Civilization made us want to be alive and act loud and make art and change the world. These artists spoke the kind of feminist language that inspired us (though so did Emma Goldman, Ellen Willis, bell hooks, and a slew of women before them). Then we had to winnow, fundraise and organize.

GG: Nerd confession time! What are you personally looking forward to the most at the festival?

EM: In Search of Margo-go. I have never seen it, though Jill Reiter, Abby (Moser) and I were all in Riot Grrrl NYC together. First, Kathleen Hanna is in it. Second, Jill has pulled together an amazing cast to perform a chunk of the script live. It will be fun, and historic, also — a first.

GG: Watching some of the film trailers is like taking a deep look into a feminist time capsule. What can audiences learn from this historic movement and culture? What’s the number one thing you hope attendees will take away from this event?

EM: I hope that a thousand filmmakers, musicians, writers, activists, DJs, sound engineers, video editors, librarians, scholars, game designers and world leaders will blossom in the wake of Grrrls On Film. Punk rock is about empowering people to express their true selves. That’s why punk and feminism are naturally entwined.

GG: What drew you to film, as your artistic platform for showcasing the early punk rock scene, as seen in your classic film The Decline of Western Civilization? Did you face any adversity or haters who didn’t think you could or should do the project?

Penelope Spheeris: I was going to punk rock clubs in Los Angeles and was concurrently doing music videos. I had a company called Rock ‘n Reel and I made music videos for the record companies…I had always been a rock and roll fan, but the punk rock movement was something I had never seen before. It really opened my eyes an I wanted to document it, thus: The Decline of Western Civilization, which I shot in 1979-80.

Life is full of adversity.

If you interpret it as something that can stop you then it really is adversity, but I interpret it as a way of learning…Hate is not a productive emotion…With my work I just worry about moving forward and doing what I believe to be the right thing. There’s definitely criticism along the way. When I first screened The Decline at the Writer’s Guild Theater…The very first comment after the film, a woman stood up and said, “How dare you glorify these heathens!” I did have a moment of self-doubt then, like “did I make a mistake by documenting this movement?” As time has gone on, I realized that woman was an un-evolved, scared human being…If you just follow your heart and do the work that you think needs to be done, especially with social comment like The Decline, then all the haters and the adversaries are irrelevant and fade away.

GG: Entertainment industries are traditionally male dominated. Any advice or thoughts on ways to combat gender inequality within said industries?

PS: I always thought when I was coming up in the business, both music and film, that they were just difficult occupations…At the time, I didn’t attribute the struggle to being female. As I look back, however, I realize there was a lot of inequality. Today there is still a lot of inequality and as I look forward I think there still will be. I think until something happens like the claims recently made by the ACLU or some other class action law suit is brought against the major movie makers, nothing is going to change. They aren’t going to step it up unless they are forced to do so.

GG: March is Women’s History Month, a perfect time to celebrate and pay tribute to the women in history who we admire. Who do you cite as some of your greatest female influences in music and film?

PS: If I have to pick my top favorite women performers over the years, it would be Tina Turner, Annie Lennox and Aretha Franklin. And of course, Janis Joplin. With regard to film, I have to say that when I saw Sigourney Weaver as ‘Ripley’ in Alien, she was so kick ass. I’m like, now that bitch is strong! Geena Davis is awesome. She is such a proponent of women’s rights and has an organization that supports women in the film industry; it’s called the Geena Davis Institute on Gender in Media. Gena Rowlands who was in all of the Cassavetes films…is the most awesome actress ever. A very close friend of mine was Maria Schneider who was in Last Tango in Paris with Bando, and those are some of the women I admire.

GG: You have been described as “punk rocker turned filmmaker.” Tell us about your background and involvement with the punk rock scene and how you discovered filmmaking was for you.

Vega Darling: I got into punk really young. I was listening to bands like L7, Iggy Pop, Babes In Toyland, Nirvana and the Banshees. In 1993, when I was 13 or 14, I read a write up on riot grrrl in a local. There was a great riot grrrl/queercore scene in Atlanta around that time. Around age 16, I co-founded the second chapter of Riot Grrrl in Atlanta an in my late teens I managed the south’s first riot grrrl band, Pagan Holiday. I kind of grew up in the riot grrrl scene. It’s influenced just about everything I’ve done.

Like punk rock and riot grrrl, I found filmmaking to be an accessible form of art. I was particularly inspired by early French cinema, queer cinema and music videos. In my teens I picked up Super 8 cameras and learned to hand splice short films together. In my 20’s, I started working on crews for independent queer films to gain more experience. I went back to college to study psychology and decided to formally study film as well.

GG: What does the Riot Grrrl movement mean to you? What inspired you to direct a documentary about it?

VD: To me, riot grrrl is a female led music genre and cultural movement. Riot grrrl is part of the early continuum of Third Wave feminism, often considered a jumping off point…(it) was some of the first attempts at intersectional feminism. It’s also responsible for the phrase “girl power.”

I decided to direct a documentary on riot grrrl because I felt like it had been long misrepresented as a white, educated, exclusive culture that did not include Black and Brown women, men and trans people. Though there are access issues for Black and Brown people in the punk scene in general, my experiences over 20+ years have demonstrated intersectionality at the core of riot grrrl…A lot of my riot grrrl pals from around the world have felt silenced by media representation of this movement. I wanted to provide a way for lesser known stories to be included in a collective narrative.

GG: Do you feel that social media is aiding or hurting the movement?

VD: I feel that social media makes it easier to connect with one another. This fosters more opportunity for discourse and network building. The music and messages of riot grrrl have continued to grow over the years, social media has certainly aided in reaching a whole new generation of young feminists.

20 Of The Most Inspiring Women In Music

An Interview With Alice Bag: We Talk New Book “Pipe Bomb For The Soul,” Sandinista Revolution, Punk Rock and More