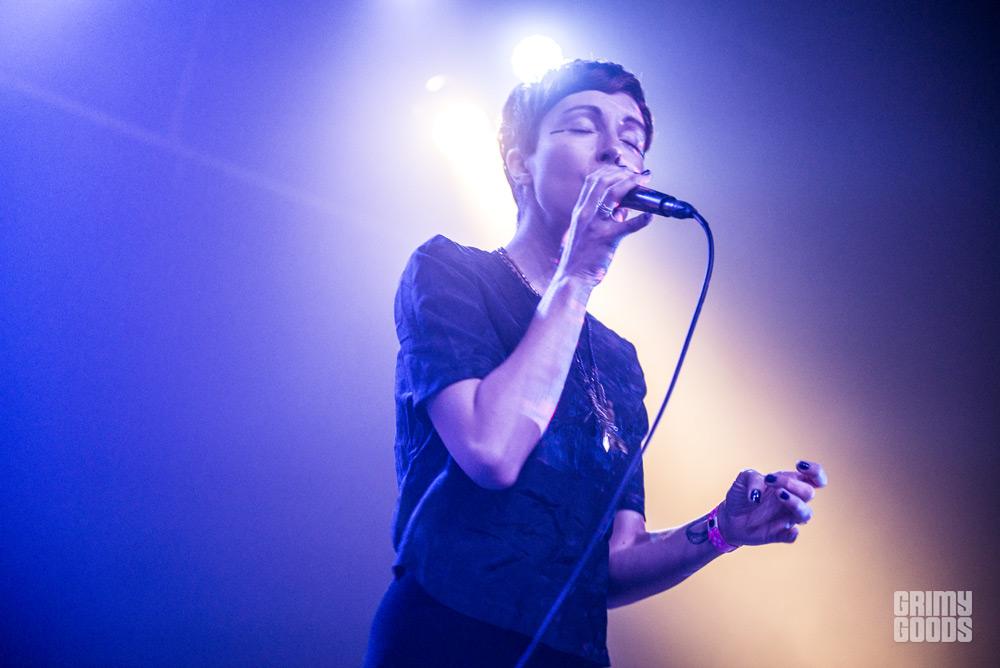 On Friday, March 25, Minneapolis synthpop band POLIÇA returns to Los Angeles for a date at the Fonda Theatre. They had a busy week during SXSW in Austin, playing upwards of a half-dozen shows during that stretch. Their new album United Crushers dropped a few weeks ago via Mom + Pop Records and it is a very brilliant and politically-charged record. We talked with singer Channy Leaneagh about the album and some of the messages behind it, check out what she had to say in our interview below!

GG: How did the recording process for the new album differ from the previous?

Channy Leaneagh: This one we wanted to know the songs really well before we recorded them. In the past we noticed that with all the music we’ve ever made, once you got on the road and toured for a couple months, the songs had a transformation in just knowing them more comfortably, they just kind of evolved into different things. In the past, we’d always really loved recording the first instinct — what we did when we first recorded, kind of that demo love. This time we wanted to try something different. We all worked on the songs together and practiced and we toured down for about nine days down to Texas.

So we got to play the songs in front of small, intimate crowds and kind of see how the crowd reacted to different things and how we felt playing different parts. Then we went to this little town outside of El Paso, right on the Mexican border called Tornillo, called Sonic Ranch Studios. It’s out on a pecan farm, it’s really secluded from the rest of the world and right on the epicenter of the drug trade and drug wars. You’re looking at Juarez and the little cartel camps across the fence. We recorded the songs there and just had 10 days to just play around and kind of escape from our homes up in cold Minnesota and just make the songs the way we wanted to. Everything was recorded there except for the vocals on “Lose You,” I did those at home because I needed them to sound like I recorded them on my computer.

GG: Your video for the song “Wedding” is one of the most interesting I’ve seen in a number of years, it’s very compelling and sticks with you after you see it. I’m curious what your role was in coming up with that concept and was that idea in mind when you wrote the song at all?

The idea for the video came after I wrote the song and the song was written and inspired by a couple different documentaries and stories in the news about the imagery you see on the internet — a modern song idea is where you’re inspired by things you see on the internet (laughs). But just all these pictures of cops kind of posing with their trophies of huge bounties of cocaine and heroin and the cash they got from the raids. The look on their faces like they got a good score and where that money goes and the unsuccessfulness of the war on drugs and how that’s affected communities — mostly black and Latino communites — even though most of the people I know using drugs are white. Just how detrimental it’s all been and how meanwhile the war on drugs isn’t working, the cops get more and more militarized and act more and more like soldiers, just like an occupied country and people try and protest are met with tanks and huge military weaponry.

So the video, I wanted to take some of those ideas but it started with a conversation with me and the director and also Ryan (Olson, production). I wanted to make a video that was kind of like the videos I grew up watching as a kid from Sesame Street, like how to make a box of crayons and these documentaries we watched on Sesame Street where we learned a lot of things and those things have stuck with me. But how you could talk about violence with kids and how to protect themselves from the police and how to stand up for people who are oppressed and also like taking back the news from the media and teaching kids to be critical thinkers. Like when they see something on the news, they see a bunch of protesters that look peaceful but the headline says “violent protesters cause police to react to violence,” for them to search for the truth rather than take what they are handed by the media. So I helped write the treatment, but the puppets, most of them were made for the video. Isaac Gale, the director put a lot of labor, it was a labor of love and a lot of friends from Minneapolis, all those kids are kids of my friends. So it was really something we all care about and we all got to work on it and make something together. It’s basically a bunch of conversations we had and wanted to pass on to kids.

GG: I can hear a kid in the background, I know you just had one pretty recently. Do you feel like today’s world is a scarier place to bring a child into than years ago, with some of the nonsense happening in our world these days?

I think it’s always good to put into perspective that you can get kind of self-involved, be like this is truly the worst time that anyone has ever lived through when in fact it’s not. The world has been pretty fucked up since the beginning time, supposedly less violent now than it has been. Even going back to the police stuff, the argument is that police need more military weaponry and more violent tactics because people are more violent. When in fact crimes are still mostly done with small handguns. So people are not more violent than they were, there’s just more access to deadlier weaponry.

Likewise, someone like Trump, I think what is happening now is we went through a time where we were like, ‘Oh America is post-racist, we’ve really come so far, we have a black president, things are on the up on up.’ When in fact I think what Trump has done and people like him, and even Obama being in office has brought this undercurrent of racists from wherever they were hiding. People that were hiding their racism or their views, Islamophobia or different things, it’s really made it acceptable to be really vocal and angry in a way that’s really terrifying. I think it’s good for it to come out in a way so we can know what we’re dealing with and know what we’re fighting against. But a lot of the stuff that we deal with now, even just traveling with an infant now, you worry more about things like what happened in France, mass shootings in America and stuff. But that’s stuff that people in Israel and the Middle East have been dealing with for a really long time. So I don’t think it’s more violent but we just hear about it more. It’s scarier because you can’t get away with it, the news and social media allows you to hear about it for a long time.

GG: The new album starts with the sound of a child and a voice comes over and says, “It’s all shit.” I found that a very interesting way to start the record and am wondering how that came to be the beginning of the new record and what the context of that is.

I moved into a new place just a couple years ago when I was starting to write the record. I saw the most horrific example of domestic abuse I’ve ever seen and it was outside and there was a little boy in the car while this couple was fighting. I saw him leave the car and he just walked by himself and he was probably like three. And likewise, seeing kids around me in my neighborhood and knowing that I have my own kid and I’ve been a preschool teacher in the past and have taken care of kids my whole life since I was 11. How all kids start out wanting to be love and wanting to have dreams and be hopeful about their future and I see these kids around me in my neighborhood and just the way people talk to them.

There’s a line in the song “Melting Block,” ‘Mothers screaming after little kids to get the fuck off your trike.’ Just the level of these little kids and the way the world is so harsh and feeling like to my own daughter and my own kids, I want to raise them with love but I also don’t want to raise them so they’re too soft because the world around them is violent and harsh. So I don’t want them to be struck with such reality when they leave my house and go out into the real world. Because people are not as kind as your mother is to you or I am to my kids all the time. So thinking about how you can instill the ability to dream into kids and want them to be whatever they want to be and you can teach them to work really hard and be a good person but still feeling like, it’s kind of all shit because I don’t know if there’s still going to be opportunities for them, I don’t know if there will be jobs. A lot of people talk about how women need to be paid the same as men, but at least in Minnesota, unemployment rate it’s at 4 percent, but for black people it’s at 14 percent. That you can’t even get a job based on the color of your skin, it’s not even about getting paid more but literally no one will hire you even though there’s help wanted signs everywhere. It’s just about feeling angry and what do we do and how do you raise up kids to be able to have a childhood that’s filled with dreams and hope when you don’t even know if that’s gonna be met with open arms when they’re adults. 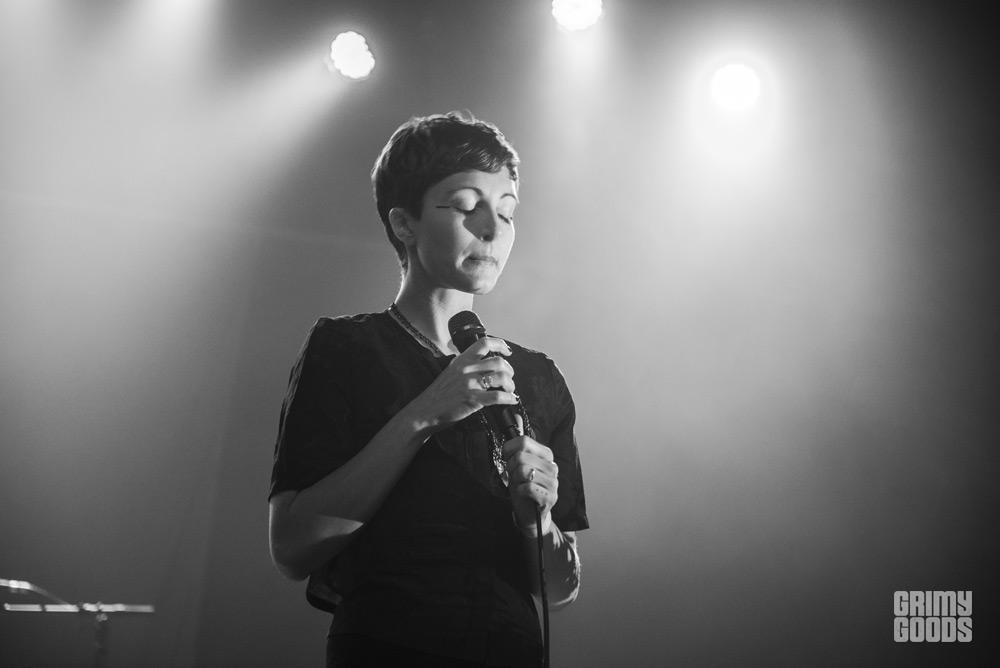 GG: Is there a date on the tour you’re looking forward to the most?

I’m really looking forward to probably LA. I haven’t been there in a long time. I really like Phoenix, I like the club there (The Crescent Ballroom). It kind of gets to be like the clubs you’ve worked with before and you know the people there and you start to build relationships with people.

GG: Does it become on tour, you look forward to seeing people you’ve gotten to know over the years because touring can be an insulating experience and if you’re going somewhere you are familiar it isn’t as insulating?

Definitely. You get further away from people at home where you can’t keep up with your friends the way you used to, especially since I’m not on Facebook so I’m really out of touch. I have friends in certain cities I look forward to seeing, so that helps.

GG: Is not being on Facebook the new not having television?

I just never got on and then it just seems now at this point everyone keeps telling me don’t do it. But I often think I should do that because you guys seem like you’re all connecting in ways I don’t get to. But now at this point it just kind of seems like, meh. I use Instagram and stuff. It does seem a little bigger with moms these days. I don’t know many people that aren’t on it, so that analogy makes sense.

Polica Steam Up the Fonda Theatre with a Blistering Hot Performance