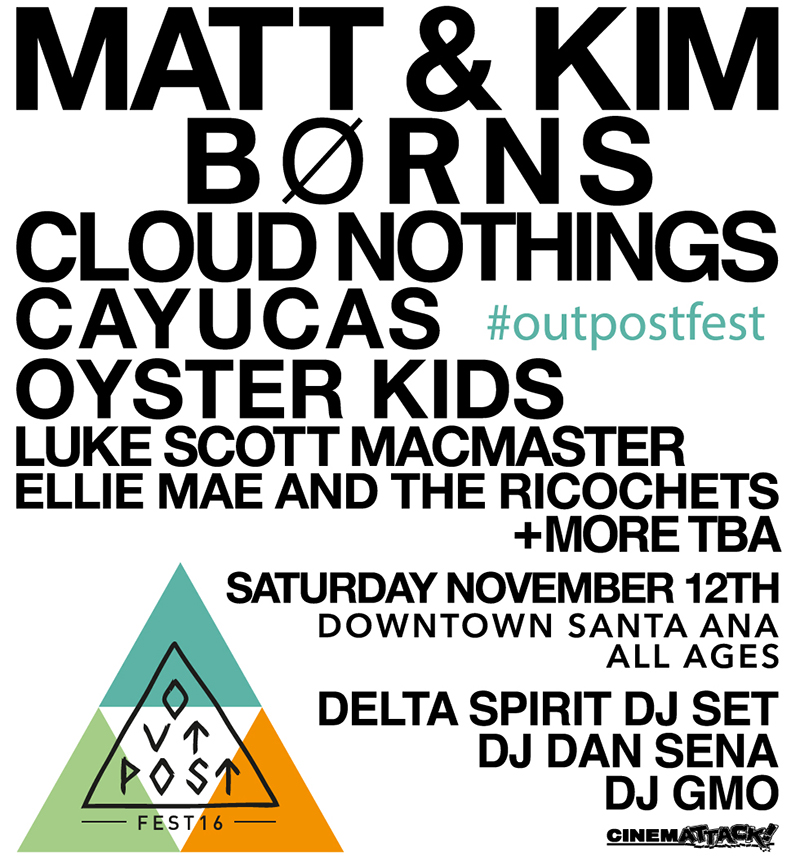 Orange County’s only music festival, the Delta Spirit-curated Outpost Fest, will be making its return to downtown Santa Ana this November and the lineup is something to get excited about.

Last year’s bill featured an eclectic bunch from Blonde Redhead to bluesy-rockers Cold War Kids, but this year promises an even more diversified group. Matt & Kim and Borns will be headlining the fest, bringing a dose of sugary, synth-powered pop to the previously indie-rock heavy tones of the fest. While Delta Spirit’s performance this year will be limited to a Dj set, which sounds absolutely spectacular, Cloud Nothings and Cayucas will be rounding out the indie tastes of the event. More acts have yet to be announced, but if Outpost isn’t yet on your radar, it should be.

As far as debuts go, last year’s event went off without a hitch and was a huge hit with fans for its prime location in an alley at the heart of downtown Santa Ana. With only one stage, a delectably affordable array of food trucks, a deliciously curated beer garden and locally oriented clothing and art vendors, Outpost restrained itself somewhere between the lineup power of Beach Goth or Burgerama with the cozy comforts (and minimal crowding) of a local street fair.

Tickets will undoubtedly go quickly, so get yours now before Outpost’s popularity leaks and they’re all gone. Tickets to Outpost Fest are priced at $40 and the event is all-ages. Tickets will go on sale this Wednesday, August 24 at 10 a.m.