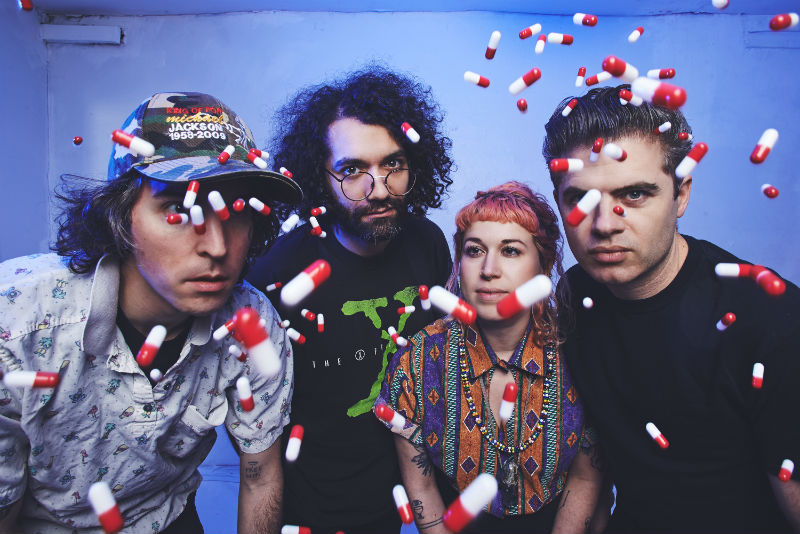 NYC’s feminist art-punk four piece Pill have a big, bold and urgent sound that plays like a call to action — to stand up for what you believe and exercise your freedoms. The band’s debut full-length Convenience was released August 19 via Mexican Summer and it propels their passionate socio-political concerns and unwavering artistic expressions. Pill doesn’t shy away from tackling the hard topics, from resistance to government control of one’s body and self in “My Rights” to facing harassment head on in “Speaking Up.” Their visually playful video for “Medicine” (originally conceived as a take on a “deranged ‘Cool World’ or ‘Roger Rabbit’) also makes a strong impression. “The song tells of a dystopian consumer-riddled shopping center: the war is over and nobody won. Like a Mike Kelly-ian propaganda drawing, the consumers crawl down the aisles, buying blind. The hook, “Medicine, take it tomorrow,” illustrates an over-diagnosed culture, either reluctant to take the antidote or defiantly refusing it — or both.”

It’s clear that politics and protest are present and essentially entwined in their pliable, feminist punk rock narrative. Drummer Andrew Spaulding elaborates, “Being punk means actively developing self, community and ideas that make us and our friends safe. There are a number of different ways to do this. Bands like Downtown Boys promote it with the sharp ferocity it deserves, to them this is an emergency. Back in the day Fugazi promoted a form that focused on de-militarization and positive community action. Hip-hop and house music themselves come from decidedly punk roots, music that said ‘If you do not respect our right to be human (or aliens if we feel like it) you can’t sit with us.’ We wish to promote a form that invites outward activism and inward self-activation and a recognition that the good times — the times where we allow ourselves to dance and laugh — are enhanced when we are all together…

…To accomplish this great feat of humanity, to arrive at this hypothetical room in the distant future where we all dance together, is contingent upon one’s recognition of the evils at hand. Over-militarized police without adequate training murdering black people in the street, LGBTQ bloodshed and basic denial of rights, never-ending warfare and the military-industrial complex, corporate greed at the expense of the planet and humanity. Transformation will begin only when those who deny these truths are convinced otherwise. A steep hill to say the least. Pill attempts to create an environment of sound that invites all listeners to self-actualize, self-activate and hopefully, dance as if they are in that hypothetical future room. Truly, to dance with abandon is one of the most profound political acts we can hope to accomplish because to do so we must be free, and to be free means the shackles of society have been unlocked for a moment and we are safe to express our own particular life’s path to those friends around us who would listen.”

I admit I had to exercise some patience in order to internalize some of the harsher, dissonant sounds, and hone in closely on vocalist Veronica Torres’ spoken-word like flow, but I was glad I did as it afforded me the opportunity to really grasp the weight of this album. I came out the other side of the listening experience engaged and reminded that musical freedom, speech and expression are not to be taken for granted as they serve as essential unifying bonds between people.

I grew curious as to what the band hoped other listeners would take away from the Convenience listening experience and they had this to say. “What they wish! Once it leaves our hands, it’s tough to control and we wouldn’t have it any other way. So much of the album’s lyrical content describes self. We can show you the door but you have to walk through it. We can only hope that the concepts discussed have some influence on self-designation and identity in this very confusing and altered world we all share.”

Pill also reveals that a truly collaborative approach to the music was at the heart of its formation. “We’ve always treated the project with democratic respect. After writing and recording Convenience we now know that it takes each and all of us to illustrate an entire album. All four of us had a hand in the writing process; although Veronica writes the majority of the lyrics independently, we all weighed in on the concepts (especially problematic, political or systemic) that are discussed on the album as a whole.”

The prominent use of saxophone, an underrated instrument outside of the jazz/easy listening realms in my opinion, also drew my attention. Plus, it felt like a sweet little throw back to the hey day of X-Ray Spex. Surprisingly, the band was not specifically drawn to the saxophone. “The four elements of Pill were naturally drawn to each other because they were all interested in the same kinds of sounds: loud, dark provocative, droning, etc. A willingness to try anything in order to get the message across, an emphasis on totally going for it no matter what. When saxophonist Ben Jaffee originally joined the band, his approach to playing live is what was attractive — an openness and a strong will.”

The band’s influences such as Krautrock, The Germs, Japanese pop, psychedelia, etc can be picked out here and there but the band itself was not intended to be based off of anything specific. “The influences are usually not apparent to us until we listen to our recordings. We typically only catch on to a direct influence in retrospect.” Other sonic influences include found sounds from the city of New York itself, Pill’s home base. The band refers to a quote from Charlie Parker, “If you don’t live it, it won’t come out of your horn.” Pill are certainly living their truth, fighting for expressive freedom in today’s politically maddening world and sharing it with listeners who are then free to interpret, think and act as they are inspired to do.

Pill leave for a UK/European tour with Parquet Courts from October 14-31. Sadly no West Coast show dates currently scheduled but the band is planning a US and additional UK/Europe tour in 2017. The band is also writing a follow up EP for Dull Tools and there will be some additional media treats out this Fall/Winter: a video for “Dead Boys” in October and more videos in the coming months, including a very special and particularly demented TV series called “PILLPOP.TV.”

Watch Pill’s video for “Medicine” below.

Stream “My Rights” below.

Stream “Speaking Up” below. 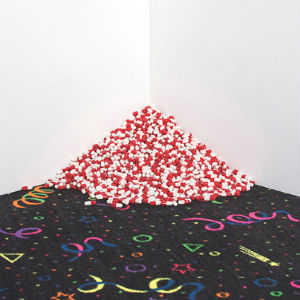