On her fourth solo tour after seven long years, Gwen Stefani brought the dazzling heat to the Fabulous Forum on Saturday night. Stefani pulled out all the shine with incredible production lights and graphics adding to her already sizable voice. Proudly supporting her third solo album and most recent release This Is What The Truth Feels Like, pure joy was practically pouring out of the adored pop star. She had the pleasure of bringing out Eve to accompany each other on their 2001 hit “Let Me Blow Ya Mind.” Talk about a throwback! There was definitely something so beautiful in being able to share these songs we will always know the lyrics to with each and every other fan across the Forum.

It goes without saying that her fanbase is one of the most special and beloved. In between songs, she read the many signs they waved over the crowd and even brought up a girl who wanted her L.A.M.B (Stefani’s designer line “Love.Angel.Music.Baby”) tattoo signed.

The night went forth No Doubt favorites like “Underneath It All” and Hella Good,” both of which were a bit strange to see performed without the other two members. Then you had the ultimate breakup ballad “Don’t Speak” which tugged at the heartstrings of longtime No Doubt fans. I mean, her whole catalog is the epitome of our teen years!

Gwen Stefani is a total stand alone in her own way; she’s sweet and glittery, yet still an unpredictable time bomb, fierce as ever. Not to mention, she’s very much in love. She surprised fans when she brought out her beau, country superstar, Blake Shelton. Together, the two lovebirds sang their country track “Go Ahead and Break My Heart.”

More Photos of Gwen Stefani at The Forum! 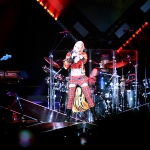 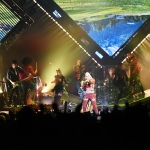 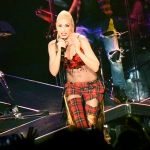 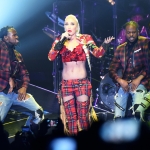 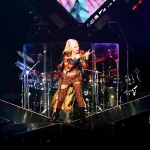 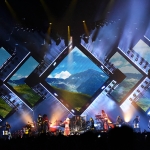 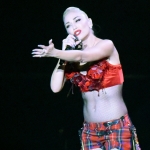 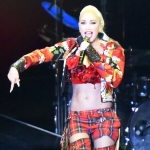 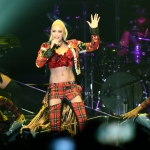 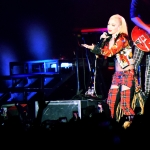 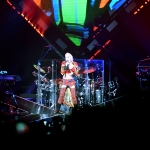 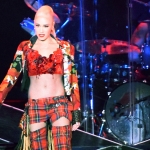