Solange at FYF 2017 by Steven Ward

With 2017 being FYF’s inaugural debut as a three-day festival, there was an obvious toll taken on the spirits (and feet) of even the festival’s most veteran of attendees as they showed up to conquer the last leg of their weekend at Exposition Park. With Sunday being one of the coolest days of the event it wasn’t too hard to muscle one’s way through it with a cocktail of frozen lemonades, alcohol, and Japanese style hot dogs from Sumo Dog. But if you ever did get too weary and found yourself trading the chance to see some band for sitting on your ass in the shade–for which there is no shame–it was pertinent to remind yourself that you weren’t alone. It’s easy to forget how absolutely, face-meltingly hot it must be for bands to not just stand there with the sun boiling their eyes and skin, but to also engage in physical movement while on the giant microwave that is the stage and sing in some masochistic “fuck you” to the sun. Some survive, which is insane–but some thrive, and that’s just insanity. So at some point, we hope you on Sunday chugged a beer or swallowed an entire ice-cream in honor of the people who essentially light themselves on fire and dance on a stage in Southern California in the middle of summer for our entertainment.

Cherry Glazer was one of those batshit insane bands that just exploded in the face of the sun, with lead singer Clementine Creevy crawling on stage and growling at the crowd as the band came out. Creevy must have been photosynthesizing throughout their performance because the heat just didn’t seem to slow her down if anything it gave her more energy to rage to. Even fans who’d gotten to the Lawn stage early for prime spots for Iggy Pop were more than a little impressed by Cherry Glazer’s balls-to-the-wall, unadulterated rock grit. Boiling down their more grunge-stylized tunes, the quartet gave an early slot on the festival’s second biggest stage the same feel as a sweaty garage set at your friend of a friend’s house. Punkish in sentiment and voracious energy, it’s also important to note that Cherry Glazer’s songs are deceptively melodic in their hooks and Creevy’s songwriting is filled with easy to follow lyricisms doused in her volatile howls.

At the Club stage (the festival’s perpetual hidden gem) Julia Jacklin gave her large crowd and already growing following an equally impassioned set, mixing deeply cutting tales of personal crisis with her dreamy, alt-country confessionals. Echoing a little bit of fellow FYF artist Angel Olsen, the Jacklin might be new to the festival circuit but her transition from the eased intimacy of small theaters to open stages was nothing short of flawless. Not as stripped-down as most singer/songwriters who boast the level of poetics her songs seem to flow with, the 26-year-old Australian native relies just as much on the fleshed-out canvassing of her band’s polished sound as her own soft crooning, making her a veritable gateway drug to the bouncy rhythmics of other Americana style indie art-pop acts.

But to quench your thirst for that breezy, oh so unofficially Californian indie-rock sound that bleeds of light percussion, elongated strumming melodies, and a lead vocalist that sounds like he’s singing through a Walkman cassette, Whitney was more than happy to oblige the request. Once the begrudging silver-lining that emerged after the breakup of Smith Westerns, now I wonder just where we’d all be spiritually and emotionally had Max Kakacek and Julien Ehrlich decided to not keep creating music together. Their sleek sound is a bit of a conundrum and ignoring that initial cliched analogy about the music they make, Whitney’s indie-rock sound constantly pushes the envelope between groovy guitar and percussion, borrowing from an endless array of tastes that revolve around Ehrlich’s glossy, heart string tugging vocals. From his drum Ehrlich enraptures the crowd and just when you think something so beautiful can’t possibly grow more affecting, their signature backing brass duo begins to blow their horns and the tears start cascading.

Over on the Lawn stage LA’s hometown band, Chicano Batman started a massive dance party, with lead singer Bardo Martinez charming the crowd with his obvious passionate absorption in his music. A mixture of Latin styles and psychedelic-pop, the band wasn’t a headliner but definitely got the warmest welcome of the weekend as Martinez told the crowd that they belonged to us as an LA band. Dazzling behind his keyboard and twinkling those signature tropicalia tastes, Martinez and company gave a much needed Latin flavor to FYF–solidifying it more and more as a festival rich in Los Angeles culture.

Back to back performances by Temples and FYF favorite Mac Demarco on the Trees stage made it the place to be for close to two hours. Sporting their iconic hairdos as weirdly alternate-universe versions of psychedelic-era Beatles, the British quartet is anything but trite imitations of 70’s psych-pop. Their potent synth-fused melodies are riveting at the very least and never feel overwhelming, instead, the band is purposefully melodic and live James Bagshaw’s voice is a lustrous beam. In contrast to Temples consuming auditory trips, Mac Demarco brought his comedy/music act back to FYF for the fifth year in a row–and while there are those bitter people scoff and scowl at that fact–a majority of the festival’s attendees just can’t get enough of the man and we can’t blame him. With a vocal range that goes from bottomless breaths to high-pitched howls and yelps, Demarco has become a staple and icon at most festivals he performs. If you’re ever unsure what day he’s playing at a festival you’re attending, it’s going to be the one where an ungodly number of people are wearing overalls. A captivating live-performer that balances his easy-listening, rather straightforward songs with his own quirky mannerisms and songwriting, Demarco never ceases to over-compensate by stripping down (sometimes to his underwear) and raging with the crowd. Regardless of your opinion of how his music sounds as a studio recording, the guy always puts on an insane show that requires you to see at least once and if you didn’t catch him this year (shame on you), no worries, he’ll probably be there next year too.

Even with all its impeccable opening acts, FYF day three was stacked enough as it is with its three huge headliners in the form of Iggy Pop, Solange Knowles, and Nine Inch Nails. Superstars in their own right, those three alone could’ve shut down an entire weekend of music with little effort, but placed in such close proximity on the same night–it’s a wonder that a hole in space-time wasn’t ripped open and all of us swallowed into a heavenly musical limbo. The excitement for Iggy Pop was potent at the Lawn stage and coming out the gate shirtless and riled up, howling “I Wanna Be Your Dog,” was just how we wanted him to serve up his set. Spending what seemed like an equal amount of time in the crowd as he did onstage, Iggy was completely wrapped up in the wild natures of his songs and it was most apparent when he started singing “Lust For Life,” as he laid on his back on the stage screaming into the microphone. Pure rock-god bombast if we ever saw it.

Nine Inch Nails officially closed out FYF and the band’s return was an epic display of theatrics and combustible rock soundscapes. With Trent Reznor roaring along to their coliseum-sized industrial rock anthems, even now it’s hard to shake the virulent riffs and visceral bass from where it burrowed itself in my chest. Explosion after explosion burst from the smoke covered stage it was every bit the performance once could’ve hoped for from Nine Inch Nails–but while Reznor and company might’ve burned the stage to the crowd, it was Solange who an hour or so previous had elevated to ethereal heights. Personally, I went into Solange’s set blind, with only a handful listens to her music and little reading done on her shows. Within five minutes I was completely blown away and screaming along with the die hard fan next to me who knew every word. It would be remiss of me to even mention a comparison to her sister, so the only thing I’ll say of Beyonce is this–a muse of otherworldly proportions runs in their blood and lives in that families soul. Solange is lead-singer, conductor, theatrical coordinator, dance instructor, queen of all her voice and the light from her very visible aura touches–and the moment her gaze catches you, you’re hooked. Illuminated by one of the most gorgeous sets of the entire weekend, bathed in red lights and surrounded by large geometric structures, Solange and her large ensemble of musicians and dancers dazzled through funky-pop dance tunes and heart-tearing ballads alike.

Whitney at FYF 2017 by Steven Ward

Temples at FYF 2017 by Steven Ward 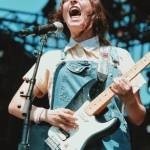 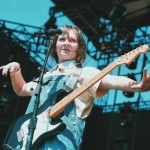 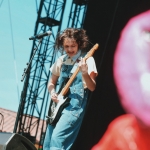 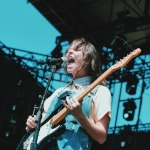 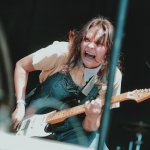 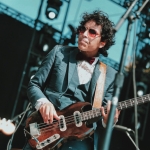 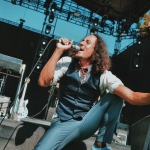 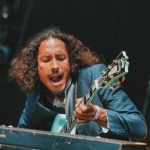 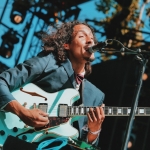 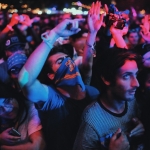 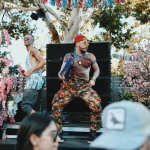 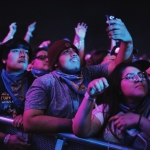 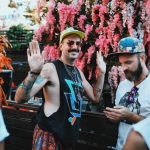 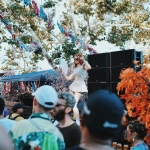 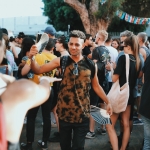 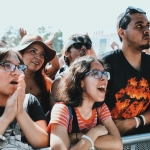 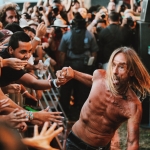 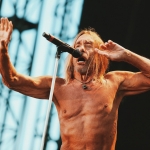 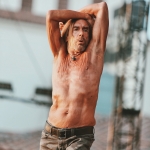