Entering the Fabulous Forum to announcements emulating that of a boxing match, Canadian indie-rockers Arcade Fire made their way towards the central ring to defend their title as indie-rock’s heavyweight champions. Laying on thick the satirical elements of their recent album Everything Now with a heavy emphasis on fake advertising and commercial vapidness that played itself out on the four LED screens above the boxing ring, the band’s immersion into their aesthetic vision for this album has exceeded that of any other previous tour.

Opening with, “Everything Now,” their ABBA meets The Suburbs-esque anthem, the entire arena exploded as over ten-thousand people roared along to the song’s “na-na-na” vocalizations at lead-singer Win Butler’s direction. From there the show evolved into a technicolor blur of some of the band’s biggest anthems from across their five album discography, leaving fans a little glazed over not only in the powerhouse of nostalgia that emerged but also a little shaken by many of their tunes’ burgeoning relevance. Arcade Fire has never been tentative about voicing their political and social concerns, a quick listen of Neon Bible makes that pretty obvious, and while Everything Now wasn’t a conceptual-beast of an album like some of their previous its songs do hold up the angst more aggressively than ever before. From the groovily existential dirge, “Signs of Live,” to the cutting criticisms of social priorities on, “Creature Comfort,” a song with a particularly powerful line about suicide that gnaws at the messily complex relationship between art and escapism–Arcade Fire presses your face against the screen and never lets you look away.

But as a band that made its debut with an album about death, the anthems that thunder through their repertoire have never been polished soundtracks of triumph; instead, coursing through the underbelly of their grandiose melodies is a struggle to reconcile the best and worst of the human condition. Live, that budding melancholy bursts when magnified by the hundreds and thousands who pack arenas and sell-out festivals to see one of indie-rock’s first darlings–and the band itself matches that gushing of unfiltered passion tear for tear. When Will Butler started banging his trusty drum as part of the intro to, “Rebellion (Lies),” tumbling around the stage like Charlie Chaplin in a farce and grabbing ahold of guitarist Richard Parry to swing him over the ring’s ropes, it was hard not to just follow suit. One of the great joys of seeing Arcade Fire live alone is watching them essentially play musical chairs with their respective duties onstage, swapping instruments and seats for nearly every song. One minute Regine Chassagne is on her keytar, the next it’s an accordion; Will is somehow tearing up his dancing shoes, spinning and twirling, while also playing keys/pumping out some synths on two different keyboards, then he is back to running around the stage; even Win occasionally swaps his guitar for a cowbell.

The band was even unsatisfied with their already close proximity to the crowd, with both Chassagne and Butler entering the crowds to sing and dance alongside a troupe of choreographed dancers. Both moments came as a surprise due to the central location of the stage and the couple managed to sneak into the crowd with very few people realizing they were there until they started singing and lights had revealed their position. For a band that’s gone from indie cult heroes to one of the biggest bands in the world and signees to Columbia Records, Arcade Fire has never lost the intimacy that’s made them so beloved by fans. Whether it’s Chassagne dancing to, “Sprawl II (Mountains Beyond Mountains),” in the crowd, Win doing the same during, “We Don’t Deserve Love,” or even the sight of thousands of phone screens burning in the dark as everyone in the arena hums along to the painfully relevant forebodings of, “Neon Bible.”

Arcade Fire might have the sonic firepower of a small symphony orchestra shot through a cannon and all the vast social commentaries to go with it, but the size of their baroque rock has never been more poignant to the individual. Not the biggest talker at shows Win opened up, “The Suburbs,” with a sarcastic description of the song as a complete sci-fi fictionalization about a dystopian world in the distant future in which president’s build walls to divide us. A fluid line addition in one of the song’s verses (singing, “All of the walls that they built in the 70s finally fall, when all of the walls that they built in 2017 finally fall) earned cheers from the crowd, but it was hard also not to recognize that the culture wars that pop-up all over The Suburbs and the deep political/social rifts that play host in Neon Bible hardly need any dusting off when played in today’s world.

But when you hear the entirety of a packed stadium singing about how we used to wait for letters to arrive, singing of the businessmen drinking their blood and the emperor wearing no clothes, it’s a little bit harder to give in to the despair that seems to want to swallow you whole. Arcade Fire not only offer catharsis in their anthems but the language with which to keep that darkness at bay, and you need only hear the sound of so many voices singing along to take comfort in that. Release is dancing to the thrilling sound of those thousand horses running wild in a city on fire in, “Here Comes the Night Time,” it’s dancing with Chassagne at her most hauntingly ethereal during, “Electric Blue,” or howling along to the bottomless grooves of, “Reflektor” (which featured an inconspicuous homage to David Bowie when during the part he lent his voice to a blurred image of him flashed on the LED screens). Even the band’s more somber and less anthemic pieces find ways to needle their way into your heart, with songs like, “Neighborhood #1 (Tunnels),” absolutely ripping the band-aid off childhood nostalgia in a spectacularly bittersweet fashion.

And yet, for all the ways in which Arcade Fire is this bombastic juggernaut of lyrically sublime wistfulness, there was really only one way their show was going to end–the same way it’s ended for over a decade. Even if it’s the only song you know, you owe it to yourself to hear the sound of thousands of people singing the harmonized vocalizations that open, “Wake Up.” When Parry started banging on that drum and that now iconic riff began, it was physically impossible to not become riddled with goosebumps or prevent yourself from howling along. Condensing all the woes and sufferings of everyone present into a single, melodically voiceless yell, the song’s cathartic nature is augmented by the voices around you. Singing along to the tender caress of Win’s raw croon, holding up your mistakes and turning every good thing to rust, pouring out a soul exhausted by a lifetime of pain into that final, bleakly elongated resignation to just “adjust” into something infinitely more defiant. Leaving the stage still banging their drums and playing their instruments, Arcade Fire walked into the crowd as everyone transitioned from the song’s vocalizations into a soft cover of, “Stand By Me,” led by Win and nothing could’ve ever been more blissfully perfect.

Angel Olsen at The Forum by Steven Ward

Singer-songwriter Angel Olsen opened up for Arcade Fire, bringing a gulf of contrast between the two band’s sonic capabilities. Hitting it off immediately with the many fans who’d arrived early, Olsen’s blend of rock and alt-country filled the arena with a collection of heady-shredding and her own gorgeous howls. Favorites like “Shut Up Kiss Me” and “Woman” exploded particularly well despite the peculiar setup of Arcade Fire’s, but it also showcased the singer’s chops when dropped into a such a massive arena show. If anything, Olsen’s tunes might’ve not been written as stadium anthems, but they sure as hell gut just as well and the tender rawness with which she delivers them was only amplified playing center stage at the Forum. 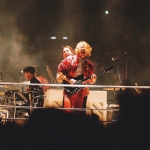 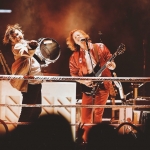 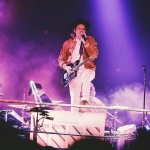 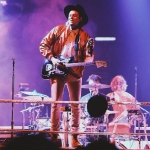 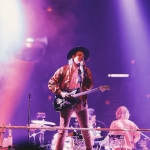 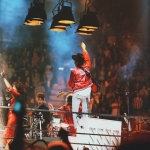 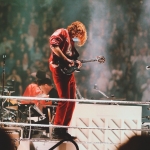 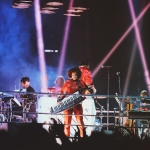 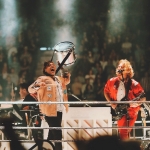 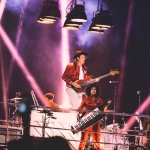 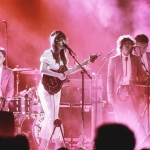 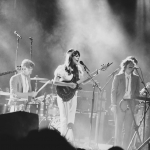 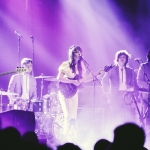