Wild-eyed and full of manic life, David Le’aupepe moves slowly through the sea of iridescent faces and outstretched arms that have marooned him in their affections. The innards of The Roxy Theatre have hit a fever pitch. And with sweat now dripping from his brow and mane—glistening reminders of the hour he’s just spent dancing his ass off—Le’aupepe begins to temper the storm inside him for the few brief moments he moves through the crowd, pulling those faces close to him for embrace as he presses past them.

Onstage, the rest of the members of Gang of Youths are thundering through the raucous “Magnolia”—Le’aupepe’s riotous retelling of a night in which he went on a soul-sickening bender that almost claimed his life. His survival was owed in great part, as he sings it, to the people on that very stage—friends who pulled him from that abyss and have gone on to give Le’aupepe a canvas of rock anthems and sublime ballads to color with his heart. In the past, this moment was the core of a Gang of Youths show—a moment of anxious and bold defiance that saw Le’aupepe shaking his ass and swaying his hips like a goddamn fiend—hungry for life and lost in the remembrance of his downward spiral. And the crowd was right there raging alongside him—on the highway he waltzed onto in the early hours of the morning—lost and angry and afraid of the world closing in.

It’s a moment of searing catharsis. But it wasn’t the end of the story. Go farther in lightness; it’s the mantra that emerged out of the band’s sophomore album of the same name—a life-affirming, live wire of hope that gets at the heart of what Gang of Youths is. If their debut The Positions was a visceral telling of all the shit and hits Le’aupepe and company have taken—Go Farther in Lightness is how they’ve overcome. Mixed together they’re an elixir of hot-blooded hope and love; and those drinking it in find themselves electrified.

Their music bristles now—amongst their deliriously, delicious guitar lines and ever-shifting soundscapes—with an unvanquished love for life. Still as ambitious as ever in their attempt to graze the cheek of the tumultuous and multifaceted nature of human existence; informed as they are by every cauterized wound that’s cut Le’aupepe’s soul.

Opening their Roxy set with “Fear and Trembling,” Le’aupepe stumbles into a night of gentler intoxication than recorded on “Magnolia.” And it paints a stark contrast—with its dancing pastors and moshpits of youth huddled in church—between the things Le’aupepe was told to put his faith in his youth, and the things he allows to guard his soul today. “So if faith is to lose the mind to win God / Then I guess I got nothing to prove,” he murmurs delicately. And so  Le’aupepe trades the religious fervor of his adolescence for something more grounded in the kind of altruistic humanism that graces his poetics. The kind that pushed him to dance with a room full of strangers in concert halls all over the world—with some, in that dimly lit Roxy room alone, as far-flung as New Zealand and Moscow—joining him in the sweat of his passion. And so we all put our hands and hearts up to the bonfire the Gang onstage has stoked—looking for something to keep the light inside of us from going out.

And it’s never anything quite so profound or mystical; but entirely human. On songs like “Do Not Let Your Spirit Wane” and “The Deepest Sighs, The Frankest Shadows,” the Gang find ways to see formidable beauty in the perseverance of the “most human of things.” It unravels itself in sublime candor on “Let Me Down Easy,” where Le’aupepe howls and aches and let’s his heart thrum to the rhythms of rebellious love; the kind that after tragedy—like the Paris shootings that made targets of concerts—demands of you to “make love that lasts with a vengeance” as a means of keeping the darkness at bay. You need a cause to fight for? “Go out and fall in love,” is Le’aupepe’s emphatic response.

But loss still abounds. Near the end of the night Le’aupepe dedicates “The Heart Is a Muscle” to his father—a man that taught him how to “love hard”—who passed away just last year. No other song in the Gang’s catalog finds such triumph and fearsome hope to gush so radiantly about. And at its center is Le’aupepe and company supercharged and alive, erratic and wild against the gallop of sonorous piano keys and driving percussiveness. It’s all quite meteoric. Bright and burning, the way they tear through the song, off-kilter from the burdensome weights on their hearts—and yet—there it is! Hidden under the the brutal flaying and colossal beating it keeps raging in them—on the stage, off the stage—into the crowd the sparks jump. And it burns with a Herculean hope in their chests.

And for as long as the boys in Gang of Youths have a throat to howl with and fingers to cut on guitar strings or blister on their drum sticks—as long as that tirelessly energized dynamo behind their ribs, pumping blood and light and fire through their veins, keeps roaring along—they’ll keep coming back for more. And they do it by lighting-up the night in a crowd unfamiliar—waltzing with you through the dark—offering themselves in a miraculous plea: Say yes, to life!

Fellow Australian singer/songwriter Gretta Ray opened the night for Gang of Youths. With her lone voice, Ray matched the kind of unbridled intimacy that would follow her set—tackling all the narratives of love and loves lost with the kind of delicate, intrepid storytelling. Both “Drive” and “Radio Silence” are immediate favorites, with Ray filling the Roxy with her sonorous trill—reminiscent of Regina Spektor but trading a piano for a guitar—and all the whimsical wonder she holds her life up with. 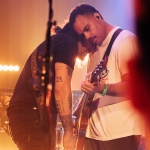 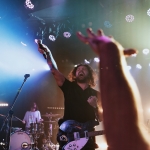 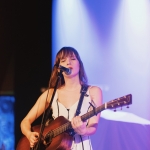 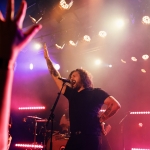 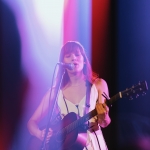 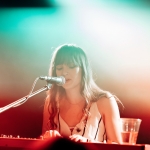 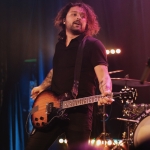 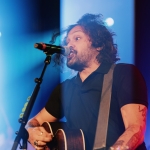 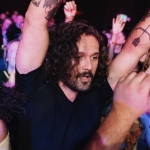 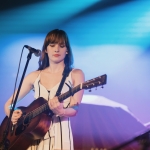 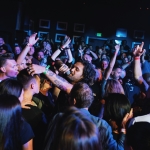 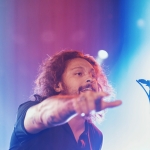 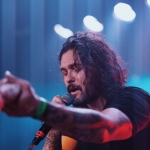 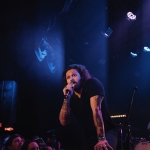