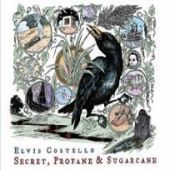 Elvis Costello teams up with buddy T-Bone Burnett on his first release for the Starbucks music label (yes you read correctly). “Secret, Profane & Sugarcane” is uh, a bit Starbucksy, which isn’t a bad thing (in terms of music). With the two being amazing singer/song writers/guitarists the album has great lyrics as expected. It has a lil mo’country sound to it, with a bit of blues and folk, but that famed Costello voice adds all the more flair. I really like “My All Time Doll,” it has some nice soft strumming accompanied by bitter sweet lyrics that are carried so well through Costello’s alluring voice. Although “Secret, Profane & Sugarcane” can make you a bit sad, the album is a good buy. After all, what is music if it has no affect on you?

Have a listen at AOL’s Spinner.