Formerly a San Diegan, I gotta have love for the awesome music that pumps out of the good ole whale’s vagina. Not only cause they fuckin’ rock, but it’s coming from a kick-ass city. With leading bands that have made waves on the indie radar such as The Soft Pack (formerly the Muslims), Grand Ole Party, Crocodiles, Louis XIV, and many more, Hotel St. George is gearing up for that same notoriety.

The quartet proudly self-released two EP’s in 2008 and are now ready to deliver their first full-length album, “City Boy Lemon.” Dropping this August of off LA based This Is Tightrope, the boys put out some fun energetic tunes fit to shake the behind of any mini-skirt wearing hipsterette. Font-man, Matt Binder pushes out some cool vocals that echo like Jello Biafra had he teamed up with the Arctic Monkeys. Definitely not as punk or dark as Biafra, but Binder delivers that same distinct voice with a pop twist.

“City Boy Lemon” emits a more than enticing sound with tracks full of catchy guitar lines and clever riffs accompanied by some booty-shake drumming. I’m definitely diggin’ their sassy track “Jealous Boys.” It has a sweet lil guitar intro that sets the pace for a fun song you can shuffle those feet to. “Trouble” is a another sweet track where the band executes with their jammin’ skills—total goods!

Check out Hotel St. George on their myspace and be sure to pick up their new tunes. They’ve got a cool album release party coming up at the Casbah in San Diego on Aug. 13. Go!

Listen and download a free mp3 of: Jealous Boys 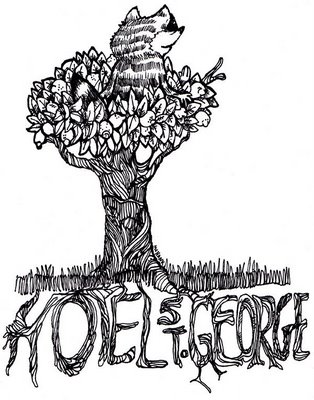