Fuck Yeah Fest (FYF Fest) went off this past Saturday at the Los Angeles Historic Park in China Town. Great line-up, but terrible event organization. The line was about a few blocks long and these poor, sweaty hipster kids had been waiting about three hours in line to get in. Not to mention the VIP/Press line was a total sham. I waited about an hour just to get our press passes only to have my photog not on the list.

The kids running the lists were dumb as rocks. When I presented my email from the publicist approving my passes the dingbat said “Well, I don’t know who that company is, errrr, duh.” Not only were their lists not in alphabetical order but they messed up on their wristbands and didn’t have the correct amounts of Press. I ran into a photog shooting 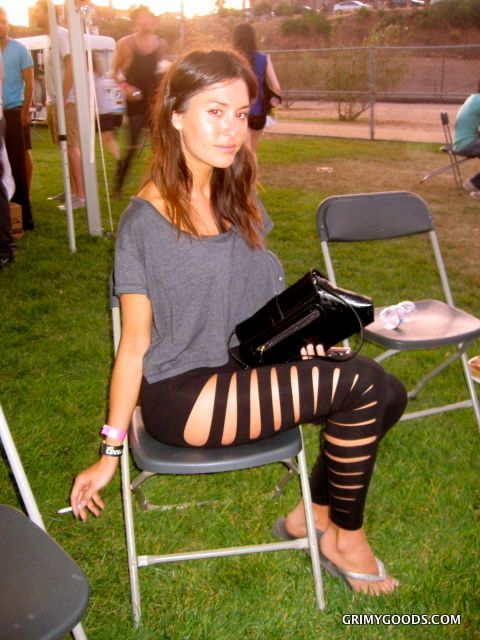 for Matador that got hassled each time in the photo pit because he was given the wrong wristband since they ran out of Press wristbands. Anyhow, we finally got in after the cranky Macy Grey wannabee finally gave my photog her access.

Nonetheless, the music killed. Woods is one of my new favorite bands. They shred that psychedelic madness! The Black Lips as always, played a shocking show. From Cole Alexander throwing up on stage (standard) to making out with Ian Saint Pé, the shit was gnarly. Nobunny was another favorite! They were so loud and full of fun energy. I think I finally blew the congestion out of my ears. Peanut Butter Wolf threw down that bumpin’ 90’s hip hop and it was all sorts of good. The Strange Boys brought members of Mika Miko and Darker My Love out for a killer set. It was funny to see Mika Miko’s, Jenna Thornhill wearing some weird ass Alien Nation cap around the venue and onstage with The Strange Boys. That chick is quite the rad character. The Thermals were amazing and so great to finally see live.

The after party at Mountain Bar was heaps of fun. I caught a bit of Crystal Antlers and then finished the night off by dancing to Patrick Melcher’s awesome DJ set. Not only can that man skate, he can throw down some epic doo-wop, punk and groovy jams.

With tons of FREE swag, yummy vegan burgers and a killer-ass line-up, FYF eventually pulled a great event. I can’t say much for the first three hours of organizational hell though. Regardless, FYF knowa how to put on one hell of festival with amazing musicians! Good times.