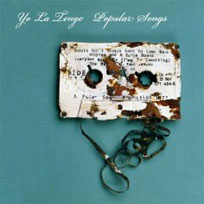 Transcending colorful fields of musical genres, don’t expect to hear an album full of the same indie pop and melodic hooks that Yo La Tengo has put out in the past. As their twelfth studio album, Yo La Tengo has stepped it up a huge notch and has dropped jaws in all the best ways with the release of their new album, “Popular Songs.” At times it takes you back to the mind-bending glory days of the 60’s and 70’s where your average rock track lasted some seven minutes long. Although their last few albums feature tracks over 10 minutes, “Popular Songs” has lengthy bangers that will blow your mind away.

Opening up with some warped out sounds, “Here to Fall” echoes out a galactic flow of unearthly instrumentals. It’s kind of weird to hear Yo La Tengo play a track with what sounds like almost no guitar. But what they bring forth is something very odd, very different and very sexy. A more than suitable introduction to the genre progression they take with “Popular Songs.”

The tone of the album easily jumps to a soft enchanting tune with “Avalon or Someone Very Similar.” Much more proven, it’s still a smooth transition from dark to light. As the fourth track rolls in balancing out the alternating styles of ambient versus traditional sounds, “Nothing to Hide” isn’t afraid to bring out the fuzzy riffs—a rockin’ medly of fuzz, sugarcoated to perfection with some sweet candy-like vocals.

Towards the end of the album, the shit gets a lil crazy with the last three tracks. Combined they take up about 36 minutes of the album! From gentle ballads that ooze soothing melodies with “More Stars Than There Are in Heaven” and “The Fireside,” the switch gets flipped with “And the Glitter is Gone.” A total jam ballad of epic instrumentation set to shred your face off! It’s a crazy combination of fuzz bombs, warped guitar lines and screeching chords—lovely madness.

Pros: Get those groovy boogaloo shoes on, “Periodically Double or Triple” is a cool cool track filled with that funkdafied organ sound. Listening to “And the Glitter is Gone” is shreddtacular! A song I’d like to do some naughty things to.

One thought on ““Popular Songs” by Yo La Tengo – Album Review”