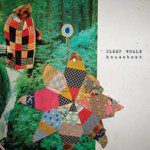 From the moment the “Houseboat” starts, you know you are going on a journey. These North Texans will take you on a trip through ambient swirls and electronic twirls amidst gentle tinkering strings and echoed vocals. This is not your usual good ol’ boys from the South. Experimental and mostly instrumental, Sleep Whale’s debut is an experience in crossing boundaries between folk, electronic effects, post-rock and ambient music.

Sleep Whale has a bag of musical tricks that they perform skillfully. At times, the tricks become a little mundane and monotonous, yet at others, they create an instantly recognizable cohesion, which makes the album as a whole so entrancing. As the sounds flow and patterns become apparent, while not always exciting, the album never really bores either. You are kind of waiting to hear where they are going to take you next.

Switching between muddled sounds and clean, crisp notes is another trick the band employs. However, they are most effective when it sounds as if they are fully absorbed in the tunes, and not so distracted by the blips and beeps of the electronic movements. “Summer Sick” has a satisfying mix of sweeping progressions and interesting electronic plucks. The soothing, echoing vocals and chugging guitars lighten to a rhythmic tambourine and drum pattern on one of the strongest tracks, “Still Drumming.”

One thought on ““Houseboat” by Sleep Whale – Album Review”