Dayum son. Sure this news is going to bum out a lot of skaters all across the globe. It aint’ just locals that hit up the Brooklyn Banks.

The New York City Department of Transportation has announced that they will be closing down the Brooklyn Banks pretty much immediately. They need the space for storage while restoring the bridge until 2014. The banks, nestled beneath the Manhattan side of the Brooklyn Bridge are one of, if not the most, recognizable and historic skate spots in the world.

It’s difficult to convey the symbolic importance of the banks to someone outside of the skateboarding community. Steve Rodriguez, the driving force behind saving the banks when the city threatened to convert the space to a green park in 2004 and owner of New York’s 5boro skateboards, will try to explain it to the uninitiated: “It’s like saying, ‘We’re going to remove the Statue of Liberty, why is that bad?’” 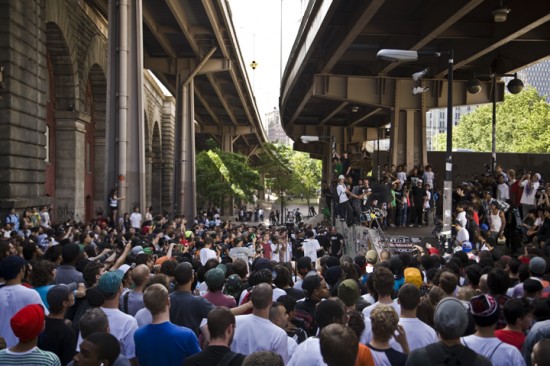 Read the full story and interview with Steve Rodriguez at Viceland.com.