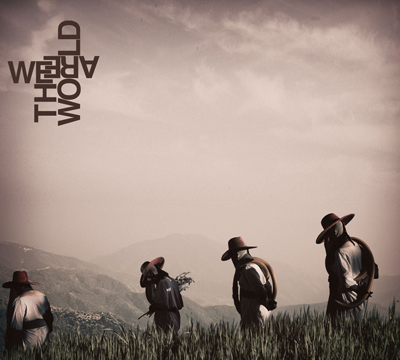 Bands within the same genre can’t help with some crossover and similarity of sound. But when that similarity cuts a little too close, it’s basically imitation (which is flattering or something right?). So, that in mind, if you really like The Knife, you will kinda like We Are the World. Granted it seems a little unfair to judge an arty performance-style band on their album alone … but to the task at hand.

We Are the World recently got the huge bump of free press in the form of a praising Twitter endorsement from the lady of pop and costumes, Gaga herself. A peculiar electro-pop ensemble of musicians and dancers, it’s understandable how their live shows could be a dramatic, energetic feast for the eyes and ears. Yet, as a single sensory observation, the album, “Clay Stones,” seems a bit forced, harsh and full of jerky electro rhythms and chant-like choruses. Vocalist, Megan Gold, sounds a bit like warped Karen O with her marching command-like lines, and hectic singing swagger. While aggressive, the vocals don’t always miss. It’s the combination of her punchy lyrical style mixed with the layers of dark and inconsistent beats that make the album feel so overpowering.

As a singular track, “Clay Stones,” has an entrancing rallying rhythm that could certainly be a dance track in a very alternative club. “Goya Monster” is the standout track where the band rings in with more originality and dance-ability, finally hitting a good, even sexy, stride. With “Clay Stones,” they beat you over the head with pounding, frantic track after track instead of making dance-craving beats to move your feet.

Despite the abrasiveness, Gaga wasn’t totally off her platinum rocker; We Are the World could be wildly successful if they work on carving out a more identifiable sound to go with their apparently raucous live shows and decidedly dark demeanor. They do have colossal energy and talent, that if harnessed, finessed and softened slightly, they might be more readily embraced by the music world.

WE ARE THE WORLD- Clay Stones by manimal vinyl
[youtube=http://www.youtube.com/watch?v=YrnTY9_KMQg&feature=player_embedded]