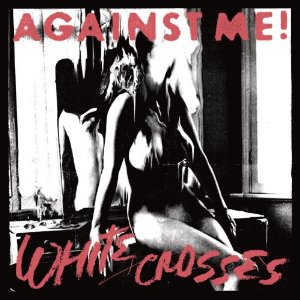 Even the most amateur music historian knows that punk rock has gone through various incarnations over the years. The early gritty punk of bands such as the Ramones and the Sex Pistols gave way to subgenres like oi, hardcore and the currently popular, pop punk.

Pop punk itself has undergone various stages since it’s introduction. From the early days of Warped Tour with Green Day and The Offspring to more recently, those gals in Fall Out Boy and Good Charlotte, pop-punk washes away some of the grit and makes punk more palatable for the Hot Topic generation.

Punk diatribe aside, with their latest, Against Me! gives the pop punk genre a big ol’ hug. Fortunately for us, while they definitely keep it mainstream, the goal here isn’t MTV stardom, it’s making solid rock music with an edge. “White Crosses” is polished, grand tribute to all that pop punk stands-for, while lead singer, Tom Gabel, even sounds like he’s hit puberty.

Don’t get it twisted, while “White Crosses” is a head-bobbing, sing-along album packed with insanely catchy anthems, lyrics weren’t sacrificed to make it mainstream. The songs reflect dissonance with personal and political issues in a way that is earnest and anguished. Much like Green Day in their latter albums, Against Me! clusters political outrage into a palatable bites on songs such as the title track where Gabel tackles the abortion debate by essentially saying he wants to “smash them all” in reference to the white crosses that symbolize aborted fetuses. Heavy content still sounds pretty happy infused with buoyant guitars and straight ahead rock rhythm.

While with “White Crosses,” Against Me! created a solid album, they will surely be slammed as “sellouts” by the punks and likely have even gone too far into the regular rock genre to be embraced by the pop punk kids. Another gripe is that there is nothing new here. And there isn’t. It’s a genre and style that has be done and done again. Yet, not always done well. With songs like “High Pressure Low,” the band creates something so familiar, likeable and reminiscent. It’s got a little Bruce Springsteen with a dash 80s, a little emo and topped with a tasty pop sensation.

The real triumph here is that “White Crosses” is an album that older punk enthusiasts can appreciate cause it sounds like an album their 13-year-old selves would have embraced (especially the song where the title says it all, “I Was A Teenage Anarchist”). And the younger generation will love it cause it’s still just left of center enough to be interesting and just angry enough to express some of that classic youthful rebellion (listen to track “Rapid Decompression”). Not classic or a masterpiece, “White Crosses” is just filled with solid rock infused pop punk summer jams.

2 thoughts on ““White Crosses” by Against Me! – Album Review”