I spent the majority of the three mile walk through the breathtaking Golden Gate Park in San Francisco talking to Tim, a Buddhist monk who came the first day of Outside Lands on Saturday, August 14 to try and spread the word of Buddha. Normally I would have shrugged off anyone trying to sway my religious interests, but it turned out to be a perfect start to a great day of music and people. It was cloudy and bordered on cold, and that didn’t change the whole weekend. The first band to start after I was finally able to make my way through security and onto the festival grounds was Langhorne Slim. The folksy rocker and his band proved to be a more than worthy recipient of my attention to start the day. Slim connected easily with the comparatively small mid afternoon audience, and had us hooked quickly. He was the kind of guy who looked completely at home with a band behind and a crowd in front of him. Disappointingly, I had to jet early to catch at least a couple minutes of Pretty Lights, a mega-hyped DJ from Colorado, who’s live shows have been talked up for a couple years now.  Unfortunately the main draw for many of his die hard fans is the “pretty lights” show that accompanies the music, and at 3:00 p.m. in the afternoon it loses most, if not all of its umpf, so to speak.

Next up was Gogol Bordello, the gypsy rock band is always entertaining, even if you don’t count yourself as a fan. As an audience it’s hard not to have a good time when it looks like there’s a party on stage. From there, I made my way across the park to see the Levon Helm Band. Best known as the drummer for The Band, (formerly Bob Dylan’s band) Levon Helm has been fronting his own act of accomplished studio musicians for many years now. As anybody in the know would have expected, the set consisted almost entirely of songs made famous by The Band.  Of course, the San Francisco crowd ate this up, and an encore performance of “The Weight”, which I count among one of my favorite songs of all time, made the show for me.

Another trip across the park brought me to My Morning Jacket. Front man Jim James (Yim Yames), fresh off a stint with his super-group side project Monsters of Folk, seemed delighted to be back with his band. What was a little over-kill was how he switched to a new guitar for every song. I understand their songs can be varied, but you can’t expect me to believe that more than half of those guitars don’t sound the same. Nevertheless, they’re a great band, who put on a great show, just a little too low-key for what I was looking for at that point in the day.

Although I wasn’t expecting much, I still had a glimmer of hope that Wolfmother would give me the rock I craved.  Since band leader Andrew Stockdale split with his original rhythm section, he has been playing with a four piece band of little known musicians, and at least on record, they haven’t been the same. The show was lack luster, and the tone was set almost immediately when one of the doves they released from the top of the stage shit on my head. I couldn’t stomach watching a shadow of what had once been one of my favorite acts, so I continued on down the road to the stage that would become my final destination of day one.

Cat Power, who is often known to be simultaneously awkward and adorable on stage, really surprised me. Her low key band served as the perfect toast to the jelly that is her voice. And part way through the set, she decided to drop down off the stage and roam the photo pit singing several songs eye to eye with her fans. After she closed the set with “Sea of Love”, the crowd seemed to be getting anxious. Everybody knew what was coming. Almost immediately after Cat Power left the stage, I was swept up in a surge as the crowd wanted to be as close as they could to see The Strokes.

With an hour to go before show time I was closer than I had ever been before with that many strangers. The crowd flowed like a sea, momentum pushing currents through, and nobody had any choice but to go with it. At first it was uncomfortable and claustrophobic. But soon, with a little help from the growing cloud of pot smoke over head, it didn’t seem that bad. While watching a team of roadies set up what seemed to be hundreds of lights, I quickly found myself front-and-center. The band, playing just their second show in the US since their seemingly endless hiatus four years ago, strode on stage to a near hysterical crowd. From the opening bass drum kicks of “New York City Cops”, the band played a near perfect set, precise and clean. If not for a botched start to “Under control, you might have thought they were playing over a backing track. Addititonally, they actually looked happy to be there and playing together. They played almost all of their first two albums, “Is This It?”, and “Room on Fire,” respectively, along with several selections from their third album “First Impressions of Earth.” The perfectly timed light show brought that much more out of the music, lights changing with nearly every snare hit by drummer Fab Moretti. I can honestly say, this was one of the top five coolest things I’ve ever seen.  Many question if their ever-so-delayed fourth album will ever be released, and in some interviews, the future of the band seems to be uncertain. But if you ever get a chance to see The Strokes play live, GO. Don’t question it, just go. 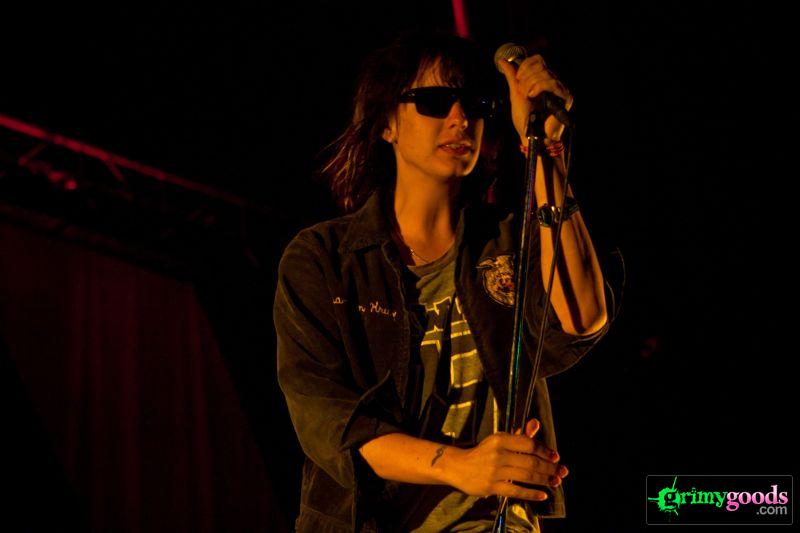 We have four pages of photos! Click through all the thumbnails!