Nevermind the amusing irony that a label called Brushfire Records threw an intimate record preview party in the woods of Coldwater Canyon Park last Wednesday, Aug. 18, 2010 at the Mark Taper Foundation Amphitheater. Grimy Goods was invited to a gathering of friends, family and colleagues under the trees that gave the perfect setting for a live show anticipating Matt Costa’s new record, “Mobile Chateau.” Due out September 21, 2010, “Mobile Chateau” will be Matt’s third full-length album but the first that he produced alone. Tom Dumont of No Doubt co-produced Matt’s previous albums so “Mobile Chateau” should offer a closer representation of Matt’s musical direction and how it has evolved.

The hour long set included a few familiar songs like “Sweet Rose” and the popular single, “Mr. Pitiful.” Matt mostly kept on guitar but switched to keyboards and even trumpet for a few tracks.  Backed by members of the recently dissolved band, Mothers Sons, and his wife on stage for a couple of songs, Matt played tracks from the new album including the single, “Witchcraft.” Some of the newer material sounded undoubtedly more psychedelic than his previous folk pop influences. There’s a definite anachronism to the songs where I felt like I happily tumbled down a time portal to the 60s. Also, if this was a fashion blog, I’d comment on the sharply dressed ensembles of Matt and his wife, Casey (adorable bow in hair), but you can decide from the photos below.

It was a whimsical night atop the canyon as crickets chirped in between songs. Matt even joked that he felt obliged to tell a story in such a setting. I somehow got splinters on my hands but y’know— such a death defying sacrifice for journalism was worth the sting when there’s great music involved. The cozy amphitheater, maintained by Tree People, made me wish there was a campfire and marshmallows to complete the laid back atmosphere. For the last song, Matt unplugged his acoustic guitar, stepped away from the stage and just sang to the crowd of friends.

Following the release of “Mobile Chateau,” Matt Costa will launch a U.S. tour in September with a few shows in Canada. For those of you in Los Angeles, be sure to catch him at the Troubadour on October 13! 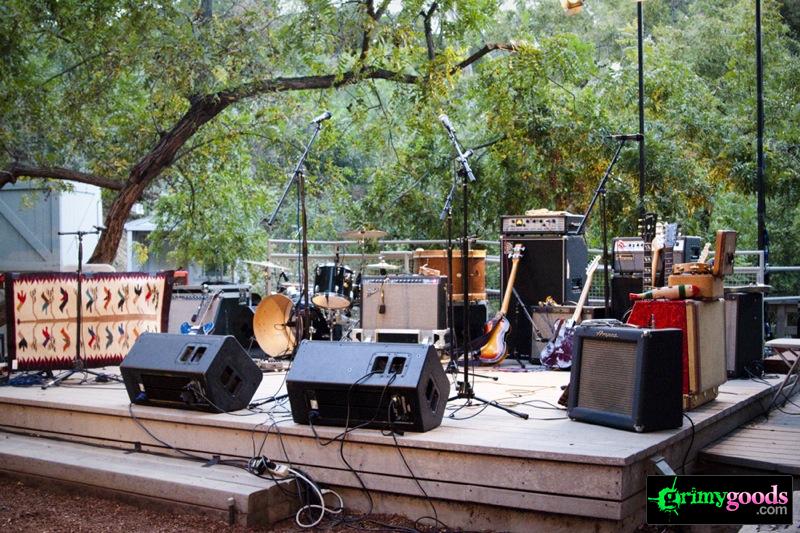