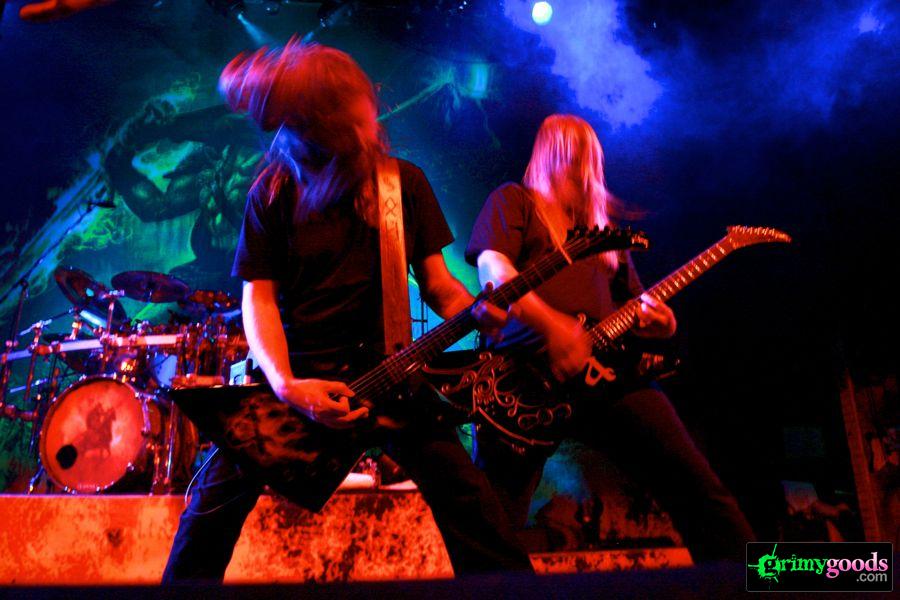 It’s quite rare to get to see a single band play by themselves for three hours, especially if you’re a fan; an opportunity like that isn’t likely to present itself for most people. However, if you’re a fan of melodic death metal giants, Amon Amarth, that dream can actually come true. On Thursday, April 24th at the House of Blues Sunset, the band made the ninth stop of their North American trek in support of their newest album, Surtur Rising. Truly, it was a treat for any fan of the quintet, who had no other bands opening for them; rather, they opened for themselves. The first set was the new album in its entirety, while the second set featured numerous songs throughout their intimidating discography.

Due to the rarity of such a show, it was obvious it was going to bring in many fans, but just how many came as a surprise to a lot of people (including the House of Blues, who seriously underestimated the size of the crowd). Even in comparison to numerous tours and festivals, this author has never seen a longer line at the House of Blues Sunset; it stretched well beyond a block in length and was still growing minutes before the band began playing. One employee of the House of Blues confessed that the normally off-limits balcony had to be made publicly accessible, simply due to the amount of bodies crammed into the venue.

A giant picture of the album art decorated the background, and as the members strode upon stage amidst wild cheers, jets of fog spurted into the air, fluidly mixing with the pot smoke already present. They immediately burst into the first song on Surtur Rising, which is “War of the Gods,” a definite crowd-pleaser. The floor erupted into a blur of frothing hair and waving horns; some people, clearly not used to metal shows of this caliber, struggled to make their way to the sidelines. Others embraced the pure violence, ripping off their shirts, throwing half-empty cups of beer, or shoving through the crowd to enter the mosh pit. Throughout the show, many smaller pits would suddenly spring to life, and people would be forced to get out of the way or outright jump in. Even during the first song, crowd surfers were being thrown onto shoulders and towards the stage. It wouldn’t have been surprising to see swords and axes being drawn; it was truly a battle. Even vocalist Johan Hegg looked surprised by the intensity of the crowd; he commented on it then and several more times throughout the show.

It’s interesting to see a band’s first tour after the release of a new album, because then one can observe what songs other people enjoy. “War of the Gods,” “Destroyer of the Universe,” “Slaves of Fear,” and “A Beast Am I” seem to be the particular crowd favorites, more than likely due to their thrash nature that makes them excellent live songs. Still, quite a few people went crazy during their more mature, epic song “Doom Over Dead Man.”

Then, the crowd was forced to wait. A brief intermission separated the two sets, and the gathering anticipation was as thick as coagulated blood. Smokers and drinkers went to get a boost of their vice, while some chose to stay rooted to their spots.

When they began their next set, the crowd surged like soldiers rushing to war. The band opened up with “Twilight of the Thunder God,” and the whole crowd joined in on the shouting of the title words. Amon Amarth seemed to have even more energy the second time around, their long hair fanning in circles and the members strolling the stage with the presence of the gods they write about. 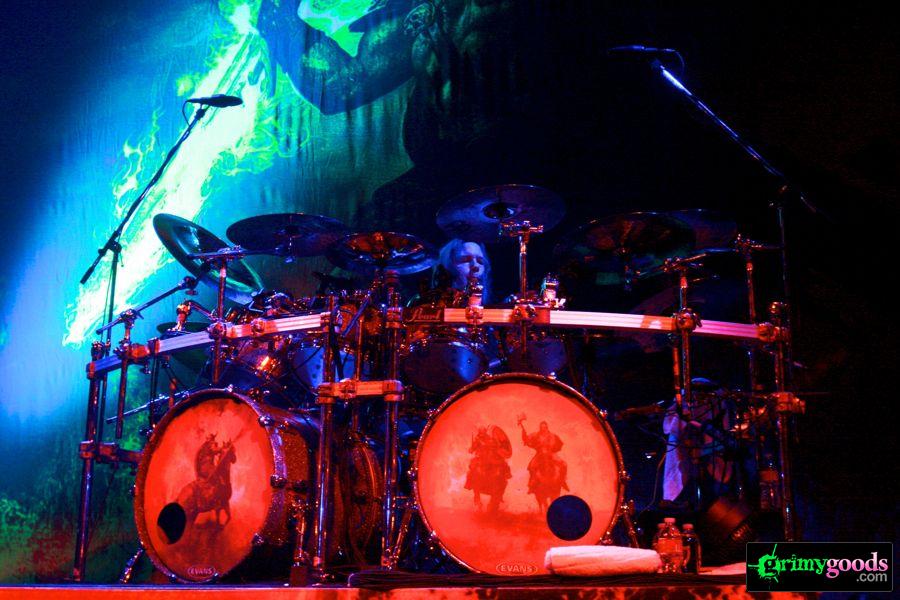 Having such a large discography is a true benefit of this group; they are able to choose from a massive armament of songs, and they did so, making sure to touch every album at least once. They went from playing new songs to two of their first-written songs (“Without Fear” and “Victorious March”). “With Oden on Our Side” was another crowd favorite, as was “Victorious March,” which was being screamingly requested by fans throughout the entire show (which the band took full advantage of, heightening the suspense by making it one of their final numbers). Though the band is known for both the thrash and the epically melodic, they chose to mainly play songs that were faster and harder than their long storybook tracks. However, “A Thousand Years of Oppression,” an undeniably heavy yet slower song, was still performed.

Hegg talked to the crowd here and there, his deeply rugged voice emanating throughout the venue, slightly explaining a bit of their Nordic ways pertaining to the music; at one point, he mentioned the upcoming Thor movie, jokingly condemning it for its mispronunciation of the thunder god’s name, which led them into their next song “Asator” (the Nordic way of saying Thor).

They played a number of songs during their second set and then said goodnight, but fans were in for another surprise; less than five minutes had passed before the band returned to the stage and played an encore of three songs, ending with “Varyags of Miklagaard,” a song that numerous people were surprised to see them play live. Hegg encouraged people to sing along; even if they didn’t know the words, they could still just scream. It was a grand final song, with the entire crowd once again coming together to chant while the entire downstairs evolved into a massive pit.

Once the show was over, the band shook hands with people, tossing guitar picks and drum sticks into the crowd. Sweaty, exhausted, yet happy people trooped out of the House of Blues like survivors of one of the battles that the band constantly details.

Live, the band sounds as if you’re listening to one of their cds; the infrequency of errors during their set only heighten the concert experience. Their energy is apparent even though they’ve been a group for almost twenty years. Whether or not you enjoy this particular group is irrelevant as long as you enjoy this genre of music. Amon Amarth are great to see live, and it is fully recommended by this author that you do so if you get a chance. 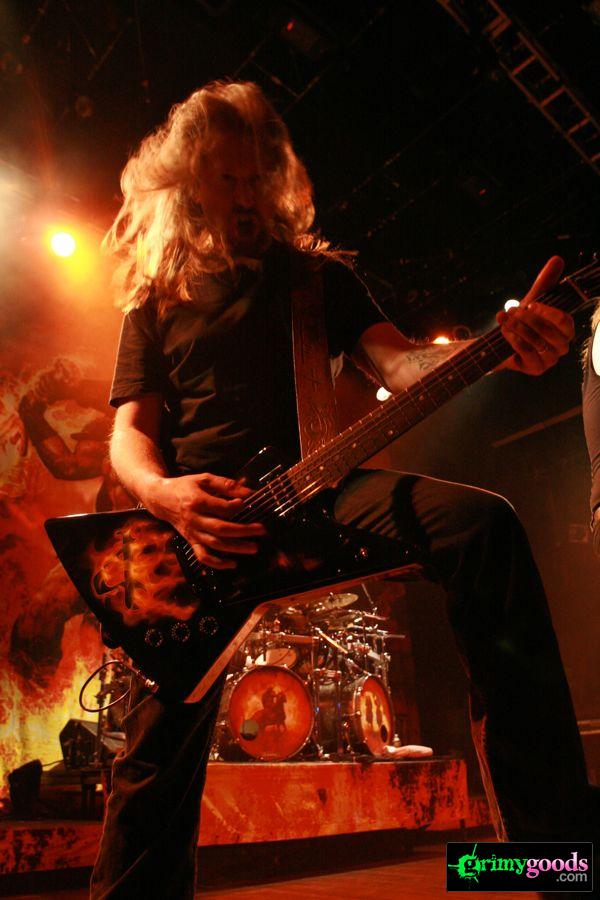 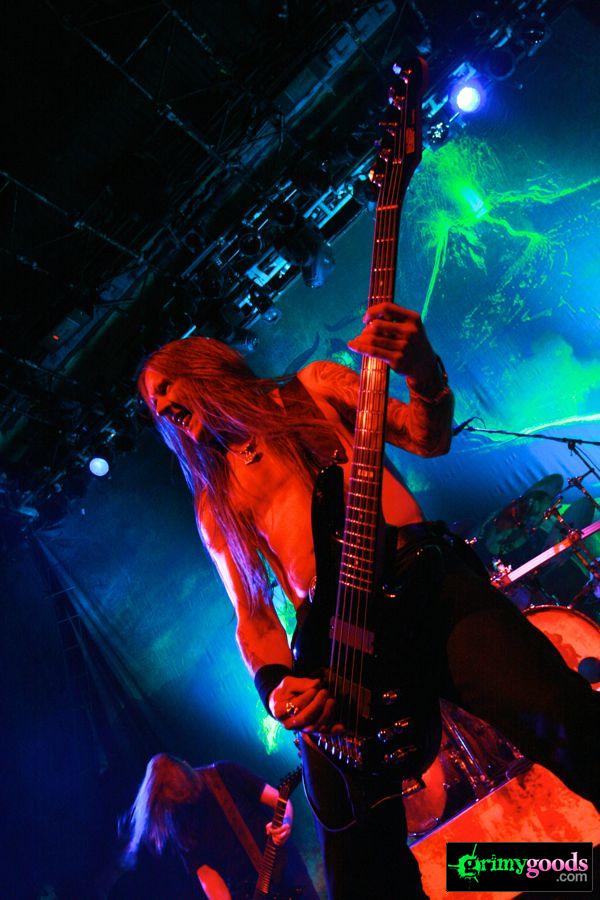 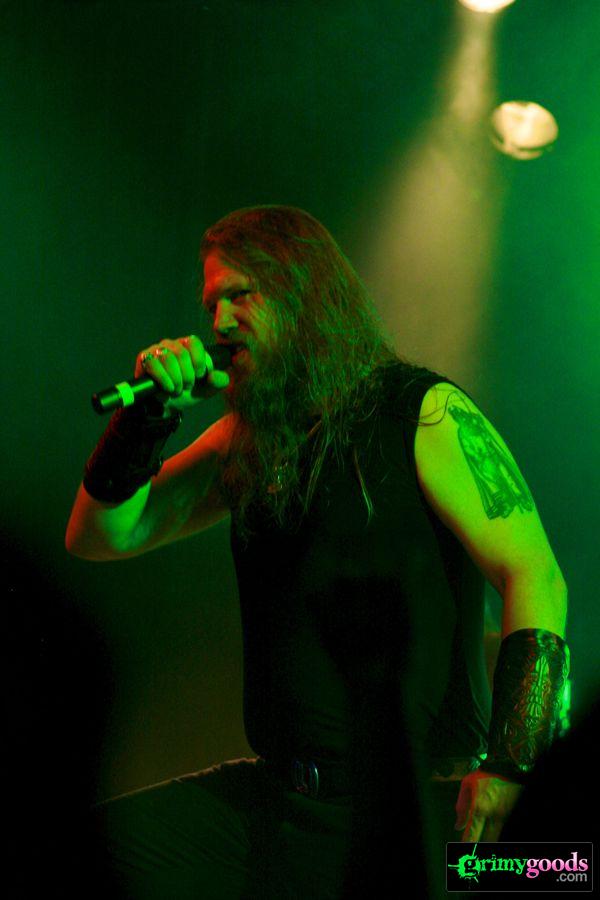 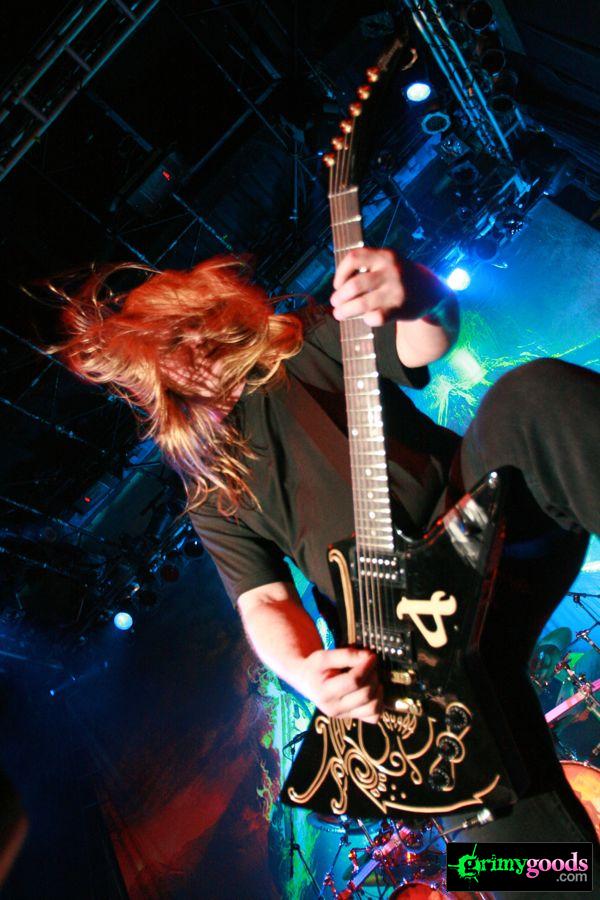