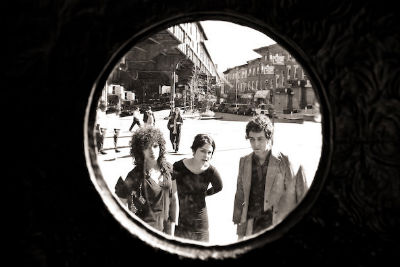 If your head doesn’t bang and your body doesn’t tremble and shake like the shock of 1,000 volts  when you hear The Ettes’ new album Wicked Will, then there is clearly something wrong with you.  To the corner with a dunce cap you go because this album effing ROCKS.

If you don’t realize it in the first track “Teeth” I will forgive you because it starts off with a rough and tumble dark country beat and ominous guitar tones.  Singer/guitarist Coco sings, “You’ve got this thing about you, that keeps me at the edge of my seat, ‘cause every time you smile, I can tell you’re just showing teeth.”  That may be very well true in this song that leads with such a suspenseful start, but for this Nashville based trio are doing a lot more than just showing teeth.  They are showing us a rocking good time with their heavy armor of beats, bass and guitar.

The distorted fuzz rock and demanding vocals of “Excuse” stands out as a pure raw power track.  Jangly cymbals complement the bass lines and Coco’s squealing guitar riffs beg for your attention.  The woah oh oh’s here are sing-along perfect, not cliché and never overdone.  The quick shift into “The Pendulum” proves that The Ettes’ have an obvious affinity for staggering rock and roll, reverb and tambourines included — very 60s mod-esque.

Their country twang and lyrical vulnerability comes out in “My Heart” as Coco quickly calls “Well you’re not gonna break my heart, ‘Cause my heart ain’t what I’m givin’ to you, and I’m not gonna beg for yours, ‘cause that’s not what I’m here to do.”  I’m looking forward to the response the crowd will give during this song live.  I can only imagine a raucous one since this is the type of song that will make you put on those boots that were made for walkin’.  “You Never Say” brings out their punk edge with Jem’s blistering bass lines, pogo inducing guitar solos and drummer, Poni’s verse carrying drumstick claps.  They bring the album full circle, taking the rock rush back down a notch to a slower pace with the ghostly vintage vibe of closing track, “The Worst There Is.”

The Ettes are musical homies and have recorded with the likes of Dan Auerbach of the Black Keys and for Wicked Will have reunited with producer Liam Watson (Bobby Long, The Kills, White Stripes) who also recorded their debut album Shake the Dust.  This seems to have made for not only a fine collaboration to which I tip my hat but also shape this album into something raw, edgy yet also soulful and polished.  This album keeps my head banging, my boots stomping and my heart in check and I couldn’t be more excited to see it all in action at their upcoming show at The Echo on August 25, 2011 — presented by Grimy Goods. 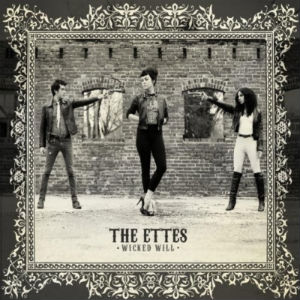 The Ettes – Excuse by PressHere