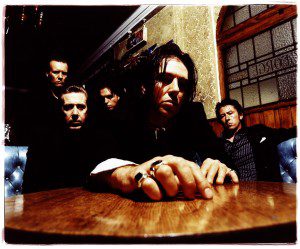 Excuse me sir? Do you have the directions to the nearest whiskey bar and a couple of aspirins?

This is the question that The Jim Jones Revue’s newest album leaves you asking. “Burning Your House Down” is as torrid and ornery as the name suggests. Released on London’s Punk Rock Blues record label, the album is raw rock n’roll, all quivering lips and rambling riffs of epic proportions. Think The Rolling Stones circa 1963 honky tonk rock with a twist of Jerry Lee Lewis’s blazing ivories with a dash of Little Richard and you’ve got The Jim Jones Revue.

Nitty and gritty with flaming fury they are clearly influenced by the rock of days gone by, sampling sounds from such bands as The Cramps and The Birthday Party. All the blistering bass and rebel-without-a-cause-bravado leaves me to assume that this group of men were born with cigarettes hanging out the side of their mouths.

A band of true antiquity they fan the flame of the good old days, staying true to the bare-boned musical feel of early rock and keeping it simple – that is, as simple as this blaring music can be.

Chronically impassioned and sexually charged, the guitars reek of heavy grinding and the drums smash you upside the head like an angry fist in an anonymous back alley. Gone are the over produced vocals and over done instrumentals of some new age rock bands, and you’re left with a shrieking sound that pierces your eardrum. Musically, the noise is immense and the energy is high, from song one to the last note of the album you’re trapped in a dive bar and you’re not getting out. If you’re in the mood for some belligerent fun you’ve got it … and if not, I’d advise you find some indie singer-songwriter ‘cause this album is not for the faint of ear.

Although the album is predominantly made up of songs sadly interchangeable with one another, they do deliver with a few stimulating tracks that wake the listener up and demand attention. My personal favorite is “Shoot First,” a gleaming track, highlighted by this truly intoxicating bass line that you can’t help but move to, once again punctuated by those too-good-to-be-true smashing keys that I am head over heels for. You can almost see the ivory flying and the long-legged ladies twisting in some dark little bar. “Come closer my dear/I can almost taste you from here” frontman Jim Jones groans on “Foghorn” a horny track of lewd seduction coupled with wild instrumental antics that make hips gyrate and clothes fly off. Filthy and fervent, a Molotov cocktail of punk, blues and scathing rock that makes for an explosive sound. Not everyone’s cup of tea, I understand—but there is no denying the energy in every strum, drum and black throated belt.

The title track, “Burning Your House Down,” is an explosive, can’t-ignore-me track with deep dark vocals and the most delicately devilish keys that contrast one another nicely into a spiteful ballad of faith gone sour.

To sum up, this collection is simple. It is loud and proud rock n’roll—the same kind your Ma and Pops were raised on. Brash and unapologetic it begs for sloppy sing-alongs and whiskey soaked blue suede shoes. Pumping heavy with testosterone, the album is a modern day melting pot of punk, rock and blues, giving us the garage band sound of new born inspiration that reminds us of yesteryear. 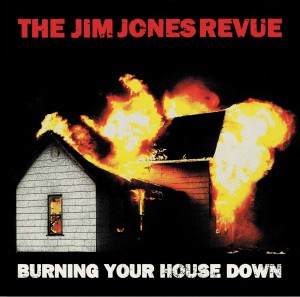