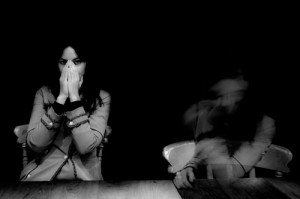 I Break Horses is an alternative pop band hailing from Sweden with vocalist and composer Maria Lindén, and lyricist and vocalist Fredrik Balck. This duo altogether underwhelms with their debut album Hearts, released by Bella Union. Sharing their name with a gorgeous song by Smog, you would excpect some of the same deep poetic meaning in their album, but if it is there it’s hidden behind the warped melodies and buzzing synths. Listing My Bloody Valentine, Slow Dive and Jesus & Mary Chain as their greatest influences you would again expect some grungy guitars contrasted by sulky and sweet vocals but you will be disappointed.

For all their bewitching fixings (the beautifully directed music video for their first single “Winter Beats”) and the completely epic band name (people that break horses are pretty boss) they unfortunately lack the musical bravado to make me swoon the way good music should. Don’t get me wrong, it’s not that the music is talentless, just boring—inarguably shades lighter than My Bloody Valentine and the bands they confess to being heavily influenced by. They lack a certain strength of production that the other bands have, lacking the sturdy baseline of deep drums and bass guitar to add depth to the otherwise tragic sound. I Break Horses come off wishy-washy and juvenile in comparison to the bands they seek inspiration from.

“Winter Beats,” the first single off their debut album and the first official music video, opens to a spacey trill of synths that deafens the senses. It stings your eardrum ‘till it’s numb then drops the vocals, meekly whining something about “frozen love” and the rest is untranslatable. I wish they lowered the electronic white noise during production and allowed us to hear what they were saying.

In their defense, the vocals are quite chilling in an enjoyable way but it’s wasted breath since they are drowned out. The song bluntly ends and track two begins with an almost identical humming. The rest of the album follows this pattern with the beats and soprano sobs feeling like carbon copies of one another.

The one exception is “Load Your Eyes,” a tad more upbeat and slightly less mind numbing, it is flirty and dare I say— sexy. The beat is sweet, a dizzy muted bing of effects. All in all, the only song I would add to my playlist.

I Break Horses debut album, Hearts—picks you up with the peacock strut of their pretty album cover, but lets you down when you press play. I respect the soft puddling sadness, but it lingers way too long, each song running into the next with no flow. If you listen closely you can hear the sound of broken kitchen appliances. Clearly a work from the heart, there is no denying that this duo lacked head and good old editing skills. I find it juvenile and expected with no fresh daisies and new tricks to moon over. If you’re looking for some shockingly ingenues band to cling to, keep looking, because as beautiful and haunting as I Break Horses are, it has been done before and done better. I find it contrived and cantankerous—a boiling bubble of angst and ostentation. 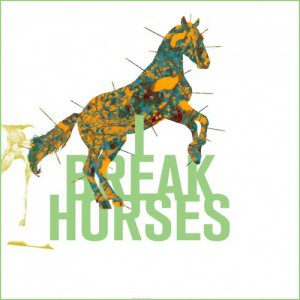 One thought on “I Break Horses “Hearts” – Album Review”