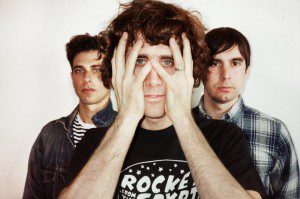 Everyone, please rise and welcome back New York City’s very own pop-dance prodigal sons, The Rapture, and with them—In The Grace Of Your Love, the first studio album in a whopping five years, released on DFA records. After surviving a decade as a band, losing members, gaining producers and ultimately changing their minds, they return with an album that acts its age while still keeping its hand on the pulse of what this band has always been about.

Produced by Philippe Zdar, the same man behind the Beastie Boys’ new album, this post-punk mash-up is disco minus the gaudiness, a toned down version of its younger self, maintaining the electro-funk roots on which they were founded. You can look at this album as a pilgrimage of sorts, paying homage to their musical morals with worship-like tunes. Even the album cover evokes a feeling of angelic surrender. The image is innocent: a man in board shorts hanging ten, arms stretched out in a sort of godly homage. This sets the vibe for the eleven tracks galvanized on their latest LP. Eleven hearty tracks about hopelessness, sacrifice, apathetic breakups and of course the quintessential subject of love—all of this in a holy rolling club kid-style that makes you wanna dance and pray, simultaneously.

Besides the basic production of the album, it lacks concrete formulas that guarantee “hit-making” singles. This band chooses to walk the path less stroked. Drummer Vito Roccoforte says it best in a recent interview with Oyster Magazine: “Focused on the process more than the results, we approached the album in a fearless manner, with nothing to lose.”

Without the pressure looming overhead of pleasing anyone but themselves, they ended up with what could arguably be their most somber album
yet, almost depressed in comparison to their 2006 LP Pieces of the People We Love. From hip-poppy squeals to barley sung vocals (so close to spoken they border on monotone) that ride the waves of shiny guitar riffs—it’s a born-again sermon on cloud nine, complete with chanty mantras that are at times self-deprecating and at times promising.

It seems the five years of reflection brought subdued spirit to the trimmed down ensemble (bassist Mattie Safer spilt amicably in July of 2009). Guitarist/vocalist Luke Jenner takes it down a level from sweaty rapid-fire soprano to a broken blunt banter that grows at times into a trance-like cooing. He turns the basic clear-spoken English into hypnotic tongue by repeating it until you believe it. Where Jenner’s lyrics are concerned, repetition is key, taking simple statements and looping them cleverly adding a high pitch here or a punch of base there, before spiraling down into one powerful verse complete with jungle beats. He’s a bluesy mummer comparable to Roger Daltrey circa Tommy with the stiff upper-lipped bite of a young Axel Rose (as odd as the comparison sounds).

Next, come a list of songs that are steadily good: Come Back To Me with its upbeat and simple percussion that employs crashing cymbals and a super steady foundation of bass drum, and the title track, In The Grace of Your Love, a zinging, snappy, pop-fueled confessional of redeeming love. You can hear their electronic roots and a corny-in-a-good-way Latino-esque bass line. It begins with a sweet whistle that leads into euphoric chants of ohs. In The Grace Of Your Love is a mostly instrumental track with a wonked out theme of bass pedal and crooked keys. It could easily be tagged as an acid-pop love ballad, slow for the usual—but still pirouetting.

There are a couple tracks I’m still questioning, like Roller Coaster. With a beachy bass line that hits the gut with a roll of plucky drums, its euphoric lyrics encase the sweet message of “lets hold onto this love.” Overall I adore the lusty guitar licks that are oh-so-pleasing, sweet as candy—but I don’t like the stupidly simple opening. The last track, It Takes Time To Be A Man, is a 70s sounding ballad. The sensual horns make it ballroom danceable, very late night romance-able. The kind of song you put on when you wanna take your clothes off. Effortlessly smooth, if Marvin Gaye wore skinny jeans and rode a fixie this is the kind of song he would write. And so you have it. The Rapture gives us all the cherry flavored, indie gospel we could ask for—sweet pastel vocals and beautifully glittery instrumentals.

The Rapture return to Los Angeles with a show at the Music Box on Oct. 6 and a show at the Glass House on Oct. 7. Check back with Grimy Goods next week. We’lll be giving away tickets to both shows!

Artsist :The Rapture
Album: In The Grace Of Your Love
Label: DFA Records
Release Date: September 6, 2011 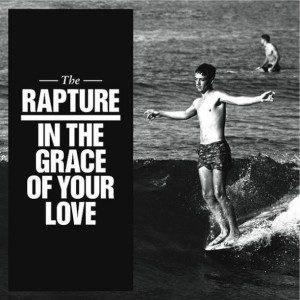