Coming out on the stage dressed in a large white gown that flowed across the stage like a blanket of growing snow, Perry Farrell had amazed us with his infamous cross-dressing attire. This was the last time I had seen Jane’s Addiction live. It was 10 years ago at the Coors Amphitheatre in San Diego.

This past Monday we were greeted by a whole new Farrell. We had seen a glimpse of his all-grown-up dapper attire as Farrell was a featured special guest at Peter Hook’s recent Joy Division performance. Although I had been hoping for a leather-corset-dress-wearing Farrell, our flamboyant frontman had appeared on the intimate stage of the John Anson Ford Amphitheatre in a very handsome grey suit. His high-waters allowed us to take a glimpse of his oh-so-stylish wingtips. Farrell has turned over a new leaf. Married with children, his witty stage banter informed us of his new self. Even after such an incredible show, the man had to be up at 6 a.m. to put his kids’ underoos on and take them to school. But don’t judge a book by its cover. He was still as crazy as ever whipping across the stage like a convulsing Tasmanian Devil as he drank from his bottle of red wine though out his stellar performance.

The entire ensemble was a vision—especially that hot piece of ass called Dave Navarro. Even after all these years the man still has that exotic baby face and continues to sport the booty huggin’ leathers as he handles topless axe poses like a champion. With those same whaling cords from ’88, Navarro brought perma-grins to our faces with his guitar mastery.

Playing 13 songs including an acoustic encore of “Jane Says,” Jane’s Addiction pleased the crowd with a variety of hits from early debut songs such as “Ted, Just Admit It…,” “Mountain Song” and the aforementioned “Jane Says.” A few other songs that really got the crowd riled up were “Been Caught Stealing” and L.A Medley. With a mashup of the Doors’ “L.A. Woman,” X’s “Nausea,” and the Germs’ “Lexicon Devil,” L.A. Medley was pretty fuckin’ rad. Even better when the hot Asian fetish dancers came out to play again. The band had featured the dancers during their sexy new song “Irresistible Force” off their new album The Great Escape Artist—out Oct. 18. The two dancers basically dry-humped both Navarro and Farrell during this song. At one point, the chick on Farrell looked like she was performing her own charade of the word “fellatio.”

From bittersweet feelings of nostalgia to arousing moments of erotica, Jane’s Addiction provided us with a more than pleasurable concert experience. Sprinkled in with engaging conversation and a whole lot of L.A. love, there was never a dull moment. It was a spectacular comeback. They even made the annoying drunk behind me who weaseled his way into our front row, bearable. Leaving the venue with a smile on my face and a lot of confetti in both my bra and boots, this is one show that will grace my “best concerts of 2011” list.

Oh, p.s., on our way to this show, leaving Echo Park—we saw a car on fire! Check out the photo in our photo gallery below. 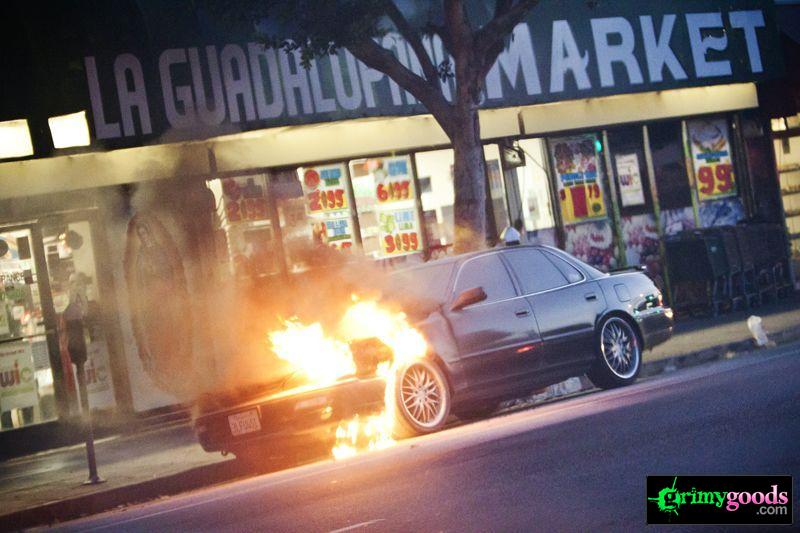