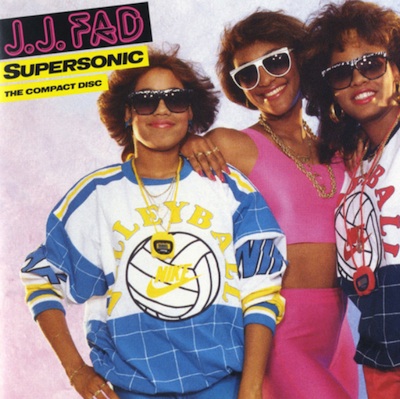 Formed in L.A.’s golden years of hip-hop, J.J. Fad originally began as a six-piece female rap group. They slimmed down to three members after being plagued by management and financial issues, leaving MC J.B., Baby-D, and Sassy C with support by DJ Train. Discovered by Eazy-E, they released their 1987 hit single, “Supersonic” via Ruthless Records, which sold 400,000 copies.  Shortly thereafter, their album, Supersonic was produced by the N.W.A. dream team of Dr. Dre, DJ Yella and Arabian Prince, which garnered them platinum status and a Grammy nomination — the first female rap group to do so.  Unlike their producers’ gangster rap orientation, the album reached a wider audience due to its pop-electronic elements. The basic, syncopated style of their rhymes and beats was a large influence for many hip-hop and pop artists to come, most notably in recent years on Fergie’s “Fergalicious.”

This song is definitely vintage gold.  Check out their video, “Supersonic” which has loads of 80’s charm —  big hair, big earrings and kickass dance moves!

“I’m always rockin’, never stoppin’, devastatin’ rappin’ lady When I’m on the microphone I sing to all these imitators” ~JJ Fad