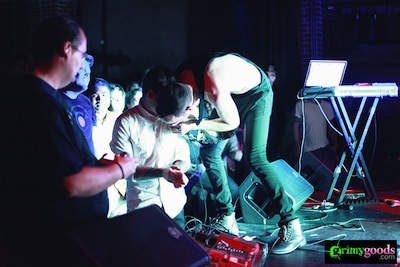 After touring North America for a solid month (plus) of spectacular shows with both M83 and Jane’s Addiction, and playing a wild sold-out homecoming show at the Bootleg Theatre — Big Black Delta are set to play a gig at the Satellite on Saturday, Dec. 22. This is the same venue that broke them in 2011 with a weekly residency night. If this is going to be anything like their Bootleg show, you won’t want to miss out on this pre-Christmas action. If we’re all still around after the said “end of the world” on Dec. 21, 2012, you should come to the Satellite for Big Black Delta! Supporting Big Black Delta are Lavinia Slaughter and Dekades.

First make sure you’re following Grimy Goods on Twitter here and/or “like” our Facebook page here. Next, email ggcontests@gmail.com with your full name for guest list and a clever reason why you want a pair of tickets to Big Black Delta at the Satellite! When you’re done with your email, send us a Tweet so we know you entered the contest or you can post on our Facebook wall. We’ll select a winner that has done all of the above mentioned. Winners will be announced via email, Facebook and Twitter on Wednesday, Dec. 19. Winners will have until 10am Thursday, Dec. 20 to reply back to our email and confirm their win.

FACEBOOK: Just leave a comment on our wall letting us know you entered our contest for tickets to Big Black Delta at the Satellite.