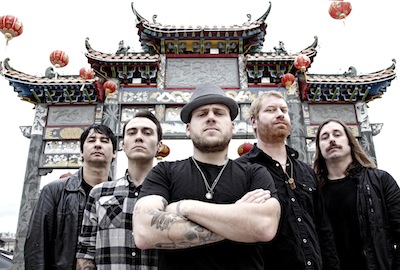 The Bronx have been beyond busy the past year, prepping another punk record between moonlighting as Mariachi El Bronx and endless touring. Now, our favorite L.A. punks are ready to release their first album in five years; Bronx (IV) is set for release via White Drugs/ATO Records on February 5. To celebrate their record release, the Bronx are playing a very SOLD OUT show at Los Globos in Silver Lake on Saturday, Feb. 2.

Three words to describe your new album?
Style over everything

How do you think it differs from your previous catalog?
Bronx IV is pretty direct; much more of a simplified sound as a whole. Outside of that, it’s Bronx at its finest.

“Under the Rabbit” is a weird title. What’s it all about?
Under the rabbit is a about the curse of bad luck; being held down by chance. AKA the rabbits foot.

Your record release at Los Globos … did Los Globos take out insurance for this event? What can fans expect?
Ha ha … As far as I know, no insurance policy has been drawn up. I’m so psyched for the show, we got Single Mothers from Canada and Death Hymn Number 9 from L.A. are opening up. We’re gonna be playing all kinds of tunes from the first record to the new one. Madness is guaranteed.

What were some inspirations/influences on this album?
The solid vibrations of our first record in five years was the main source of inspiration on this record. We have all been foaming at the mouth in anticipation of writing Bronx IV. Outside influences start with left-handed handshakes and end with male strippers …

Do you guys have clones? Between Mariachi El Bronx, Bronx, touring, this new album and of course your active social lives — how the hell do you get all this done? Do you have clones?
Being in two full-time bands has us all spread pretty thin at times, but we wouldn’t have it any other way. Music is something we can’t live without, it’s a collective dream that we all share. Energy and attitude isn’t really an issue, but if one of us hits a wall, someone else picks up the slack. No need for clones, just more Tecate.

Do you have any other L.A. tour dates planned?
No other L.A. shows, but Bronx is playing the Casbah in San Diego on Feb 1st.

What’s one of the craziest/wildest show experiences you’ve had as the Bronx?
The time somebody lost an eye in London is a classic. Also, Fletcher from Pennywise slicing his stomach to bits while we played “Knifeman” in Australia was pretty intense.If you were stranded on an island, what five albums would you want with you?

Off the top of my head … Neal Young, Harvest; first record by the Specials; the Scorpions, Love at First Sting; Fear, the Record; and the Ramones, Rocket to Russia

Where would you like to go on vacation and why?
Sri Lanka seems real peaceful.

Anything else you’d like to add?
Thanks for keeping your goods grimy.