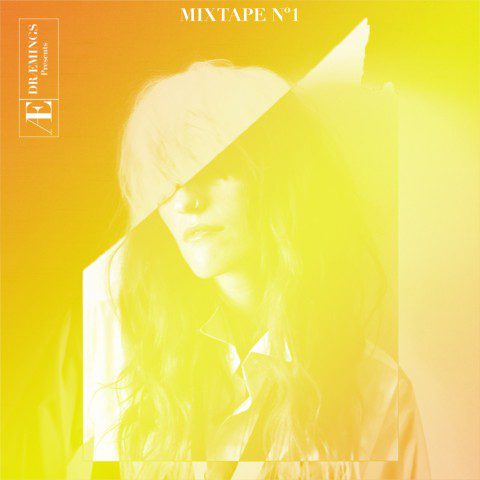 Solo artist, DRÆMINGS is rapidly rolling across the indie-pop landscape covering ground like the shadow of a storm cloud over a sunlit field. Yes, I know that is quite the colorful sentence to describe artist Kimi Recor’s new solo project (ex-Black Flamingo), but it feels appropriate to write in a style that mirrors this dreamy artist. I’ve witnessed this project’s progress, since I just happened to be present when the first words of this dream were spoken on a cool-aired summer night sitting around the fire with members of Family of the Year and Grouplove. This magical setting was the birth-place of Dræmings. No, it’s not some sort of unofficial artist brainstorming collective, it just happened to be a magical night of friends, talking, being supportive, and just plain hanging out.

Sounds like:  If the atmospheric light show phenomenon known as the Aurora Borealis created music, it would sound like Dræmings.  The fluid indie-pop sounds and lulling story-telling lyrics make it impossible to not have images pass through your mind while a voice that ranges from low and sultry, to electric and powerful flows through you. Every song sounds like it’s the anthem to some extraordinary occurrence.

Why We Like Dræmings:  Living in an area full of talent it’s easy to spot an artist that has that something special and just screams shooting star. Having been in various other projects making her path through the Los Angeles music scene, Dræmings has arrived and as we all know, to watch a star being born is never a dull occurrence.  This was evident to me at her NEVADA MIXTAPE release show on Friday January 18 at Space 15 Twenty, which made me feel like I was experiencing a live performance of a lucid dream. It was a beautiful candlelit performance under the night sky thick with an elated energy that was apparent by the entranced audience.

Best Songs:  Um … all of them? No, seriously you have to give the five-song NEVADA MIXTAPE a listen. It’s pretty epic that every song is engaging, however, the single “Reno” is my personal favorite, with its vivid imagery and catchy rhythmic lyric delivery, it’s sure to be a soaring indie-pop hit in no time.

Upcoming Releases: Debut NEVADA MIXTAPE was just released on January 15, 2013. Listen to it via Dræmings facebook or get the free download off Soundcloud.

Upcoming L.A. Show Dates: The schedule is being worked out now so follow this artist and of course Grimy Goods will keep everyone updated as well.  You seriously want to catch one of these performances, and I say performance because it’s not just a show.

Have a Listen to Dræmings:  You can download Dræmings’ debut NEVADA MIXTAPE in the Soundcloud below.