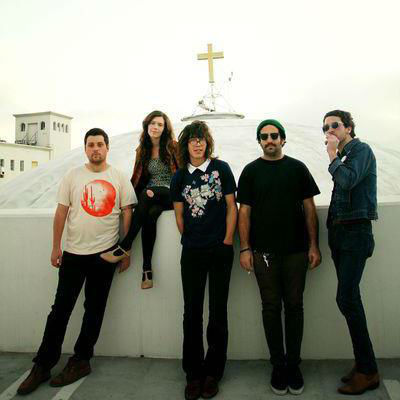 You can’t really complain about the youth of today when they’re as badass as Feeding People. This So Cal band of merry youngsters was founded and fronted by 19-year-old Jessie Jones, and their sophomore album release Island Universe is a vigorous, sprinkled with psych, rock n’ roll revival to which I proudly proclaim, “amen!” A couple shows in and Feeding People became the second band ever invited to play Low End Theory, sharing a stage with Radiohead’s Thom Yorke and on top of that, Island Universe employed the creative recording and producing minds of fellow California natives Jonny Bell of Crystal Antlers and Hanni El Khatib, for smashing results.

Feeding People are not the Doors or Jefferson Airplane (although vocal comparisons to Grace Slick, may come to mind); however, the shiny, happy feeling inside that I felt upon first hearing a classic like “Light My Fire” or “Somebody to Love” is being recreated by those rock ‘n’ roll spirits that Feeding People are aptly tapping into, and evoking that critical moment where listener and music collide with songs that grab a hold of you, rattle your brain and shake your weightless limbs until from start-to-finish.  They aren’t legends (yet) but they are the rock n’ roll NOW and proof that rock ‘n’ roll ain’t dead but very much alive and well.

This Album Would Go Well With:  A three-minute bedroom dance party; a Tarantino film; a late night drive.

Favorite Tracks: “Big Mother” – Tambourine dreams, zonked out guitar riffs, relentless drums and spellbinding vocals carry this lyrically simple, (“Ain’t no other, like Big Mother“) but provocative song. It’s so pleasantly addicting, it’s no wonder the band is using it in their promo video.

“Uranium Sea” –  Jessie’s vocals dig into deeper, darker vibes and each accented word seems to serve up spine-tingling, poetic purpose (“What a golden age, to sell your soul for free, Cali is calling me“).  The brief hint of lightness in her ‘ahh ahhs’ are delightfully deceptive as they give way to tweaked out guitars and a guttural, bass groove that toys with madness, jolting straight into the musical twilight zone by the end of the song.

“Inside Voices” – Guitar rage; lustering bass and drum breakdown; pogo; stage dive; interpretive dance (awkwardly).  Just lose it. Why? Because “I hear inside voices,” that’s why, 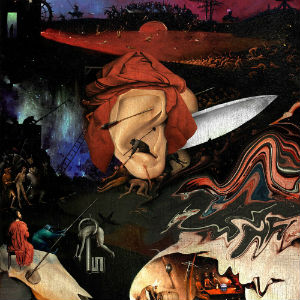