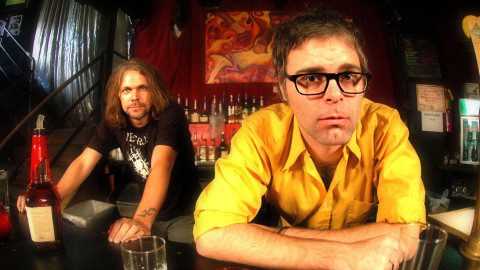 Local H is a two-man band releasing their seventh album, titled Hallelujah! I’m a Bum, produced by metal guru Sanford Parker. Their first leg of their U.S tour begins in their hometown of Chicago. Their newest album focuses on divided political climates that exists in the U.S and around the world. Many of their songs mock the polarization that affects people and examines how that national political discord affects people within their communities. After their four-year hiatus from producing a new record, Local H has emerged with a politically impacting album, that should shed light upon the listeners and the audience. Their Los Angeles stop will be at The Satellite on April 10, and the event is 21 and over.

TIckets to the show are $15, doors open at 8:30pm. You can try your luck by winning a pair of tickets with us!

First make sure you’re following Grimy Goods on Twitter here and/or “like” our Facebook page here. Next, email ggcontests@gmail.com with your full name for guest list and a clever reason why you want a pair of tickets to Local H at The Satellite. When you’re done with your email, send us a Tweet so we know you entered the contest or you can post on our Facebook wall. We’ll select a winner that has done all of the above mentioned. Winners will be announced via email, Facebook and Twitter on Monday, April 1. Winners will have until 10am, Tuesday, April 2 to reply back to our email and confirm their win.

FACEBOOK: Just leave a comment on our wall letting us know you entered our contest for tickets to Local H at The Satellite.