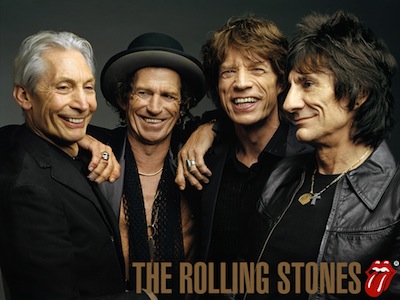 Yesterday, the Rolling Stones Tweeted “If you’re not following @GRRRegory already, now is a good time to start! The Rolling Stones’ GRRRilla has exciting news for you.” After that, the big fat gorilla known as @GRRRegory was dropping hints all day long:

“Saturday morning and you’ll see me down the park … Bout 12 ‘o’ clock you’ll see me in the road,Telling everybody where the boys all go”

“Located somewhere in Los Angeles, California … And next week they’d say my prayer on the radio … And all my dreams would come true”

“Grrrreat things are brewing! Watch this space at 12.30pm PT tomorrow for some news… #Stones50″

Tickets to the Rolling Stones at the Echoplex will go on sale at the El Rey at noon!

Check out the set list below from the Rolling Stones hour long warm-up gig in Paris.

BIG THANKS to my pal Oscar (aka the Scenestar) for sharing this huge news with me last night. We were texting until 3am out of sheer excitement! Hope to see some of you at the show!