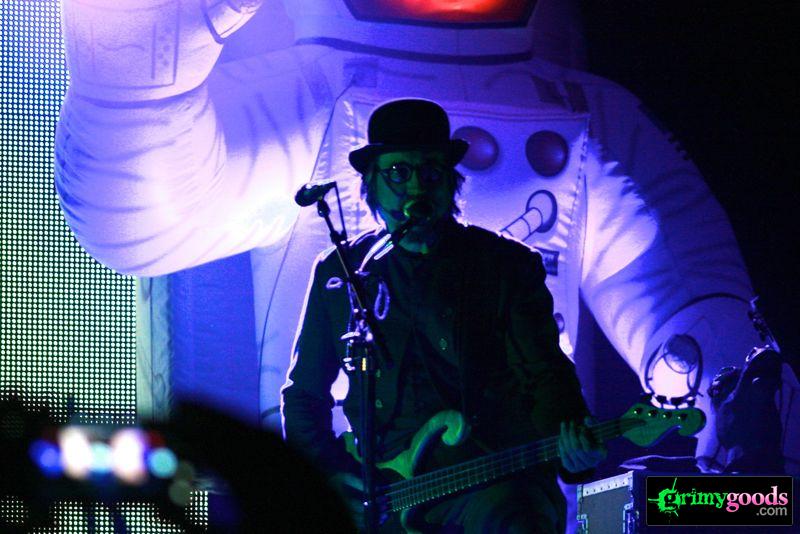 California natives, Primus will be performing at the Fox Theater Pomona next week Sunday, May 19. You may have heard them as the theme song for South Park or on Rock Band 3. Primus’ first four albums during the 1980s all feature song titles that remind us of a food fantasy land with titles such as Sailing the Seas of Cheese and Tales from the Punchbowl. Over the course of 30 years the band has toured and collaborated alongside frontmen from Metallica  Rage Against the Machine, Limp Bizkit, and acts like Wolfmother and Portugal, the Man to name a few. Since July of last year, the band decided to begin making 3D performances featuring Quad Surround sound. So grab some 3D glasses and head out to the show!

Tickets to the show are $37-$47, doors open at 7pm and is all ages. You can win a pair of tickets with us by entering the contest below, courtesy of Goldenvoice and Grimy Goods.

First make sure you’re following Grimy Goods on Twitter here and/or “like” our Facebook page here. Next, email ggcontests@gmail.com with your full name for guest list and a clever reason why you want a pair of tickets to Primus at the Fox Theater Pomona. When you’re done with your email, send us a Tweet (see below) so we know you entered the contest or you can post on our Facebook wall. We’ll select a winner that has done all of the above mentioned. Winners will be announced via email, Facebook and Twitter on Tuesday, May 14. Winners will have until 10am Wednesday, May 15 to reply back to our email and confirm their win.

TWEET: Hey @GrimyGoods, I entered your contest for FREE tickets to @Primus at @FoxTheater on May 19. http://ow.ly/kUKKP

FACEBOOK: Just leave a comment on our wall letting us know you entered our contest for tickets to Primus at the Fox Theater Pomona on May 19.

For more cool shows coming up at the Fox Theater click here. To enter other Grimy Goods contests, click here.