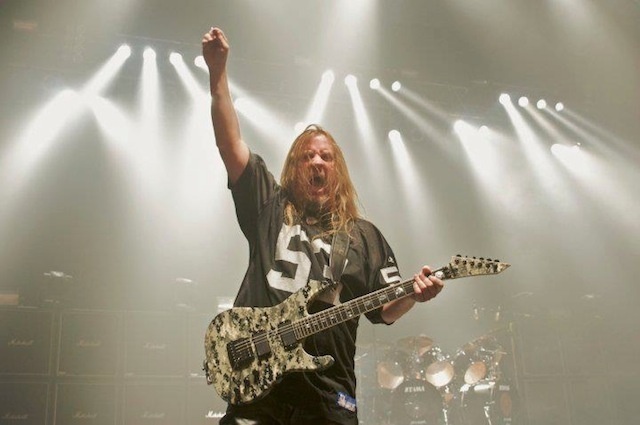 MESSAGE TO FANS:
Want to really piss off the Westboro Baptist Church at Jeff’s Memorial Celebration? Do exactly what Slayer members and family are going to do – totally ignore them. They don’t exist. And then come inside and celebrate Jeff’s life with us.

As announced last week, via Slayer’s Facebook page, there will be a special memorial celebration at the Hollywood Palladium tomorrow, (Thursday) May 23 from 3:30 – 7:30pm in honor of the late and great, guitarist and co-founder, Jeff Hanneman. 30 years of his thrashing memorable riffs and his huge influence on metal will be celebrated tomorrow in his honor. The Memorial Celebration will be free and open to the public on a first-come, first-in basis (subject to venue capacity).

There is yet no information about a live Slayer performance with the remaining members or who will be speaking, but fans can expect to come together, in masses for the celebration of Hanneman’s life.

“Hanneman helped shape Slayer’s uncompromising thrash-metal sound as well as an entire genre of music. His riffs of fury and punk-rock attitude were heard in the songs he wrote, including Slayer classics “Angel of Death,” “Raining Blood,” “South of Heaven” and “War Ensemble.” Hanneman co-founded Slayer with fellow-guitarist Kerry King, bassist Tom Araya and drummer Dave Lombardo in Huntington Park, CA in 1981. For more than 30 years, Hanneman was the band member who stayed out of the spotlight, rarely did interviews, amassed an impressive collection of World War II memorabilia, was with his wife Kathy for nearly three decades, shut off his phone and went incommunicado when he was home from tour, did not want to be on the road too late into any December as Christmas was his favorite holiday, and, from the time he was about 12 years old, woke up every, single day with one thing on his mind: playing the guitar.”

Hanneman passed away on May 2 from liver failure at the age of 49. For further updates on the Slayer Jeff Hanneman Memorial Celebration at Hollywood Palladium –  follow Slayer’s Facebook page.

Click here to view our photo gallery and review of Slayer at the Big 4.