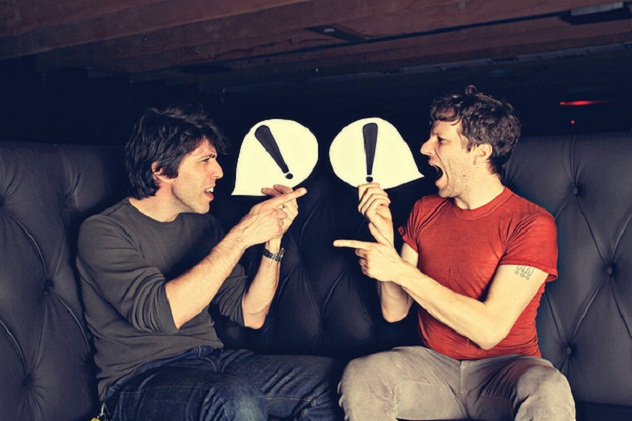 California’s !!! (Chk Chk Chk), will be performing at the El Rey Theatre on Saturday, June 1. The band, composed of 6 members led by Nic Offer, make contagious dance beats heard fresh on their fifth album titled Thr!!!er, released last month. The band incorporates saxophone on “Get That Rhythm Right” and smooth groove bass on “Even When the Water’s Cold”. Check out our post on their single “Slyd”, offering the perfect blend of house beats, available for download. Fans of The Rapture can easily compare similarities between both bands, except for their performances. Offer is a booty shaking frontman that seems to be infected with a dosage of Harlem Shake hormones. If his arm-swinging, hip-shaking moves won’t make you dance, we don’t know what will. Don’t forget your dancing shoes! Supporting the band will be White Arrows.

Tickets to the show are $22, doors open at 8PM, and the show is all ages. You can win a pair of tickets with us by entering the contest below, courtesy of Goldenvoice and Grimy Goods.

First make sure you’re following Grimy Goods on Twitter here and/or “like” our Facebook page here. Next, email ggcontests@gmail.com with your full name for guest list and a clever reason why you want a pair of tickets to !!! (Chk Chk Chk) at El Rey Theatre. When you’re done with your email, send us a Tweet so we know you entered the contest or you can post on our Facebook wall. We’ll select a winner that has done all of the above mentioned. Winners will be announced via email, Facebook and Twitter on Thursday, May 30. Winners will have until 10am Friday, May 31 to reply back to our email and confirm their win.

FACEBOOK: Just leave a comment on our wall letting us know you entered our contest for tickets to !!! (Chk Chk Chk) at El Rey Theatre on 6/1.