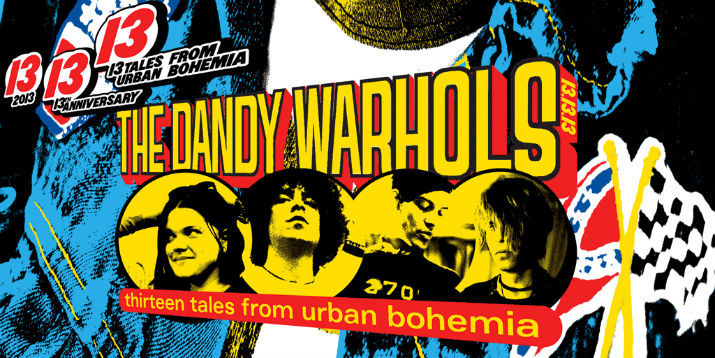 Portland’s power-pop, psych-rockers The Dandy Warhols headline the Wiltern on Friday, June 14.  The band will performing their classic studio album Thirteen Tales from Urban Bohemia, in honor of the album’s 13th anniversary, plus a slew of other hits.  The band is also set to release a remastered 2-disc version of the album with bonus tracks and mixes, available June 11 on Capitol Records.  Supporting act is The Shivas.

Tickets to the show are $27-42, doors open at 8pm, and the event is all ages. You can purchase your tickets here or try winning a pair of tickets by entering the contest below, courtesy of Live Nation and Grimy Goods.

First make sure you’re following Grimy Goods on Twitter here and/or “like” our Facebook page here. Next, email ggcontests@gmail.com with your full name for guest list and a clever reason why you want a pair of tickets to The Dandy Warhols at the Wiltern. When you’re done with your email, send us a Tweet (see Tweet below) so we know you entered the contest or you can post on our Facebook wall. We’ll select a winner that has done all of the above mentioned. Winners will be announced via email, Facebook and Twitter on Wednesday, June 12. Winners will have until 12pm Thursday, June 13 to reply back to our email and confirm their win.

TWEET: Hey @GrimyGoods, I entered your contest for FREE tickets to @TheDandyWarhols at the @Wiltern on 6/14. http://ow.ly/lR0zZ

FACEBOOK: Just leave a comment on our wall letting us know you entered our contest for tickets to The Dandy Warhols at The Wiltern on 6/14.