There are many who think that the seminal point in what is now called indie rock is the moment Lou Reed talked avant garde around town for John Cale to take his classical and drone training and bring them to the Velvet Underground; and there are plenty of facts to back up that assertion. Velvet Underground’s sometimes twang, sometimes droney, and always-drenched-in-reverb poet rock has been an influence on so many bands these days it’s impossible to count them all. Naturally, Los Angeles is now exploding with a bunch of new bands that use the Velvet Underground as a springboard to create exciting and vital new rock ‘n’ roll.

One of these great new bands are newbie Los Angeles garage rockers, Jesus Sons. Today the quintet have released their self-titled debut full length via Mock Records. With its classic sound, the eight-track record is reminiscent of those San Fernando Valley bands of the mid sixties who metamorphosed from punk-y 60s teenage angst who started turning on, tuning in and dropping out (like the Kingsmen or the Seeds). With their classic pre-metal clang-y fenders rave-up, Beefheart howls, and even double time snares — Jesus Sons bring a fiery boil and bubble to their white-boy blues anthems. The band’s classic 60s garage sound was not just in their style, but their craft. Jesus Sons’ cut  their record to a quarter tape using only a Tascam 388, vintage Silvertone amps, and Japanese guitars.

Most of Jesus Sons’ cuts are long extended jam-type songs, designed for feel rather than catchiness — but the feel is exciting and vital. “You Put a Spell on Me” is a six-and-a-half minute instrumental that starts like a jangly Phil Spector number, all big kick drum and dramatic, almost surf rock guitar strum, while seething all the way to end without boring you. “I Wanna Be Your Man” is the most Velvet Underground-influenced track, and it got me biting my bottom lip and bopping my head like a classic car rock tune should. Its anachronistically 60s suburban blues solos alternate with howls and grunts like true station wagon blues should. I really like how lead vocalist Brandon Wurtz gets out of the way, much like the Fillmore West bands that influence Jesus Sons really would — allowing for tambourines, drone-y guitars and straight up psych jams to hypnotize the listener. “Don’t Wanna Die” sounds like some version of the Sonics; if the Sonics dated cheerleaders instead of spending their afternoon in detention and got recorded in a wind tunnel. A lot of these tones stay extremely true to the sound and spirit of the original Cali high school dropout psych bands with tiny Fender Jazzmasters, wide open hi-hats and vocals just loud enough to break and deliver some insatiable ear candy.

Jesus Sons have done their homework, and not only recreate that classic sound, but they do an excellent job of getting the vibe down right. Just the right amount of rock out, just the right amount of jam; their organic collective of sounds are straight from a time when garage rock, country and blues were blending seamlessly together to create music that would rattle one’s mind and body. Impressive. 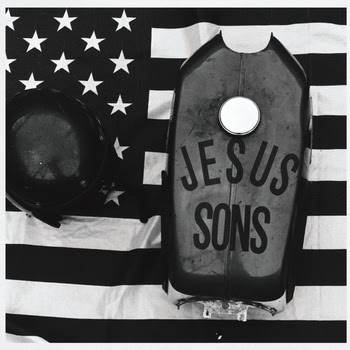 Click here for our live review and photo gallery of Jesus Sons at El Cid.