Last night, Beardyman, aka Darren Foreman, took over the The Roxy Theater in West Hollywood with a crowded room and an enthusiastic audience. He did well bringing a bit of a dance party to the venue. Beardyman performed in his own crazy or self described “silly” way. I spoke with him earlier last week over the phone and when he described his show as “silly and improvisational,” I was even more excited to be going to the show. Frankly, I wasn’t sure where that would lead. When I met with him backstage, I brought out my camera and he stared at me with a straw hanging out of his mouth. To describe him and his music as silly or quirky I think is fair. Our photo shoot continued in that vein and we talked about his tour and plans for the next few days. Pea soup, for starters was one of his must haves on his California tour. He had stopped at a little place just north of Los Angeles in the past and refuses to venture between L.A. and San Francisco without making the stop.

We continued talking about the music that would be following later in the night and later this week. I also wanted to know about his musical background. He told me that he has been working on making sounds and vocalizations since he was a boy of just five. As he grew up, he felt that he was limited by his body’s ability to make some noises or combinations so in the recent years, he has been working on his synth that he travels with. Beardyman did say though, that calling it a synth does not quite do it justice and that it is a new form of vocal music making. Of course using the synth, which has no previously recorded music in it, the shows tend to be very improvised and very electronically based but they retain a very human element. It is not like watching a DJ at all but rather a strange synth/man combo. His shows, though electronic, keep the human performance very much alive.

During the show, he went from hip hop songs about medical marijuana dispensaries and American healthcare to reggae, a melodic and romantic piece, house music that could be played worldwide and electro-pop mixed in with his almost musical comedy routine.

The audience was dancing, laughing, and doing their best to sing along. With a show that is mostly on the fly, singing along is not very doable, but there was an effort. With a set of more than an hour and a half that was constantly entertaining, I highly recommend seeing one of Beardyman’s shows. You never know exactly what you will listen to, but no matter what your genre is, I’m sure he’ll hit it at least once in the night.

Check out the photos below of Beardyman at the Roxy! 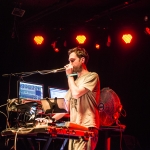 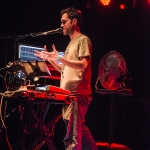 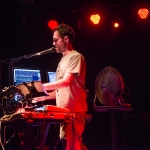 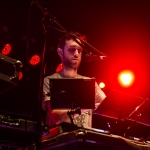 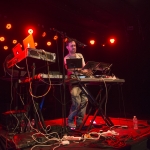 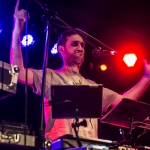 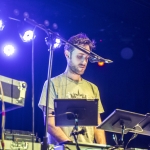 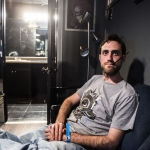