The line for the Echo on Friday night has nearly crossed over the bridge. Below us a similar line is snaking down Glendale in anticipation for Big KRIT. But, upstairs everyone is stoked to see Aussie psych-rock masters POND. Everyone I speak to cannot think of a better way to spend Halloween night. Even security working the door is handing out candy to young trick or treaters.

As the spot packs in, a witch grabs her hippie friend by the shoulders and shakes him, “POOOOOND” she exclaims. He can’t stop smiling. A bunny rabbit apologies to Spongebob for spilling beer, the irony is not lost on either of them. Somewhere in here Green Lantern is exchanging pleasantries with the Scarecrow (of Batman fame.) Andrew WK is talking to Dudley Do-Rite. An anatomical nurse in drag lights a cigarette on the patio. This is the Echo and it is Halloween.

Things become even more exciting when Nick Allbrook and Joseph Ryan of POND (dressed as Carrie and a Cheerleader, respectively) come out to have a smoke. Looks from the patrons turn to smiles, turn to iPhones, turn to sheepish requests for selfies. They humor the fans, posing for pictures with anyone who asks.

At some point the Green Lantern stops Cheerleader Joseph and says, “I gotta show you something man. Can you help unzip my costume?” With a laugh and a shrug he abides. On the Green lanterns torso is an enormous flying brain tattoo from the obscure Mink Mussel Creek T-Shirts. This is the sort of loyalty you can expect from POND fans.

The first band to play is Peter Bibby, with some help from Mr. Allbrook on the drums. The place is already packed. The lead singer is dressed as a police officer, but he is a dead ringer for a Win Butler doppelgänger. Peter Bibby plays a thrashing set that feels a bit inspired by the south, like something you would hear at a party in a barn in Marfa.

Right from the start they attempt to break cultural divides, “People get really offended with the C-word here,” the frontman explains, “Australia man, first words my mother said to me.” Their next song begins, “Hello/my name is cunt!”

On the next track they scream with abandon, “HEY you wanna fuck me?!/I’m only eighteen/years old!” But, afterwards they explain, “oddly enough that song is about credit cards.” It is hilarious. They end their set with a strikingly beautiful rendition of Kylie Minogue’s classic “Can’t Get You Out of My Head” reimagined as a lovesick hangover.

Doctupus, a three-piece band also hailing from Perth, takes the stage. Turns out their frontman is the dude dressed as Andrew WK, which only adds further weight to the already mountainous amount of evidence that Andrew WK is not a real person, but rather a foil for the ideal invitee to any party. They also prove that anything can be a song, if you make it loud enough. “This song is about having shitty housemates!” WK begins, and their sound is straight up punk. Later he introduces a song saying, “This is about the NBA! I go for the Lakers, but we’re fucked this year.” True say bro, true say.

At some point, WK shotguns a beer and gets the entire audience to chant “CUNT CUNT CUNT.” This is not the last time that the stage will be attempting to rebrand the word. “We are in L.A. for a whole week,” he announces, “What is fun to do here?”

The audience nearly unanimously responds, “SMOKE WEED!” They play a few more, hyping the spot to bursting. There are mosh pits beginning and a member of the band starts crowd surfing and playing guitar. POND has not even come on yet.

As Doctopus finishes up, the steaming Echo is packed in tight, a mass of costumed bodies in anticipation. A man in a lion mask keeps jumping on to the stage and is eventually tackled. A dude dressed as a reporter is holding a blinged out microphone and recording a breaking news story for snapchat. A wizard asks his friend, “should we try to move up?” his buddy shakes his head; it will be easier when the band starts.

POND walks on and begins “Whatever Happened to the Million Head Collide.” At that moment, when Allbrook coughs, “HU!” the crowd is electric. After Jay Watson smacks the drums, leading into the ‘drop’ the spot explodes. Costumes are torn, crowds are surfed and badassery is accomplished.

While most conversations about the drop would probably be reserved for the roll-y kids at HARD’s Day of the Dead several miles over, it is an adequate term to describe the feeling of POND’s live show. Like reaching the top of an enormous cliff face and jumping off. They have become a band that can compete with whatever the EDM tents can plug into Abelton. “Giant Tortoise,” “Elegant Design,” and “Xanman” are just a few examples. They sound even more intense live, swelling through the criminally small Echo.

But, of course, POND can also do slowed down and dance just fine. “Moth Wings” and the new “Elvis Flaming Star” had everyone grooving. The sweet yell-along of “You Broke My Cool” was a much-needed comedown. Briefly, Nick Allbrook thanked the crowd saying, “For someone who has never carved pumpkins or dressed up at all, seeing all these monsters out here is fucking amazing.”

On their final song, before an encore that included all of the artists on the bill on stage, POND finish with a heady space trip much like Tame Impala’s mid-set sonic meanderings. It sounds cataclysmic, like a planet being torn in half and exploding. Looking over, I notice Princess Leia. It may be the exhaustion, but all I can think of is this is how it must have felt on Alderaan. If it was the end of the world, than this costumed apocalypse was one hell of a funeral.

Take a look at the photos below of POND, Peter Dibby and Doctopus at the Echo! 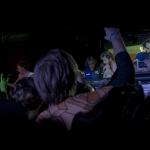 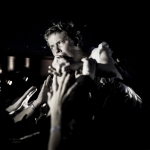 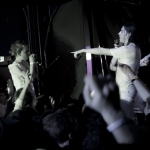 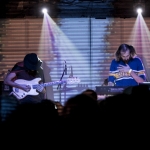 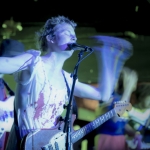 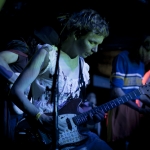 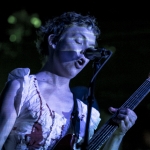 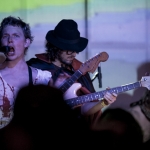 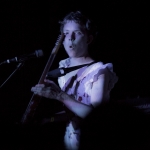 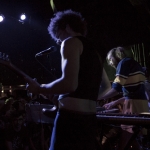 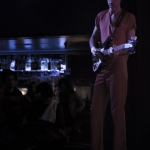 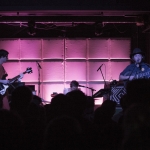 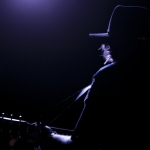 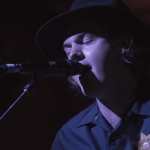 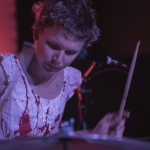 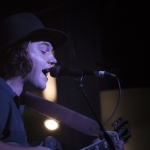 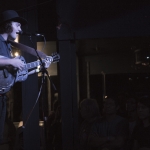 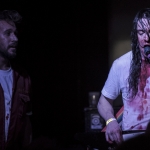 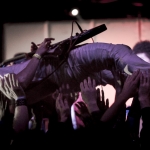 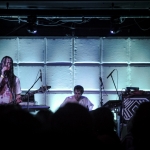 An Interview with POND: the enormity of outerspace, whiskey and jokes

Photos: Tame Impala with Jonathan Wilson at the Fox Theater