The Brian Setzer Orchestra put on a very festive show this past Sunday at the Nokia Theater in Downtown Los Angeles. Boasting a variety of holiday, swing and classic covers, people of all ages came to see the spectacle. From the adorable toddler in the audience, (yes she had ear protection on) all the way to senior citizen (and everyone in between) — it was a spectacular night for all ages.

Setzer played the holiday hits such as “Jingle Bell Rock”, “Boogie Woogie Santa Claus”, “Joy to the World”, “Jingle Bells” and others.  He did not stop there, he did his cover of Louis Prima’s “Jump, Jive and Wail”, Johnny Cash’s “Ring of Fire”, and Santo and Johnny’s “Sleepwalk”. “Sleepwalk” was especially great since he played his own version of the song, but man, every time I hear this song it reminds me of La Bamba, apparently I am not the only one.  At the end of the song a person from the audience yelled out “Ritchiiieeee” it brought quite the smile to my face although I don’t think anyone got the reference or they just didn’t care. As a side note, Brian Setzer was also in La Bamba, he played Eddie Cochran and performed “Summertime Blues” in the film.

Of course Setzer had to bring out his true classics from the Stray Cats.  He played “Sexy and Seventeen”, “Fish Net Stockings”, “Rock this Town” and “Stray Cat Strut”, which he said the Gretch Guitar that he wrote that song on was recently put into the Smithsonian. The rock-a-billy set he had while playing some of those songs were thrilling. The orchestra left the stage and it was just Setzer, bassist Johnny Hatton, and drummer Daniel Glass jamming out. Setzer really seemed to open up at this point of the show. He stood on the drum set and Hatton stood up on to his bass and they played hard and interacted with people in the pit.

It seemed to be a pretty special night for a lot of the people who attended the show, people were dressed in swing attire along with Santa and Mrs. Claus costumes. Not one person on this evening was shying away from dancing.

It was definitely a great show to get you into the spirit of the Holidays. Now all I want for Christmas is for the Stray Cats to reunite for just one tour, please. 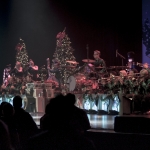 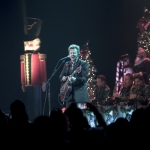 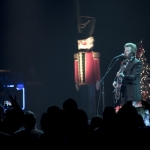 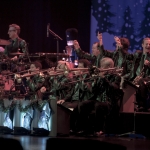 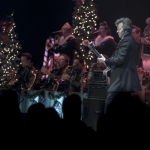 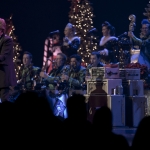 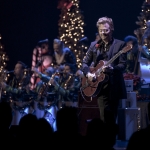 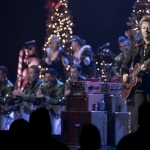