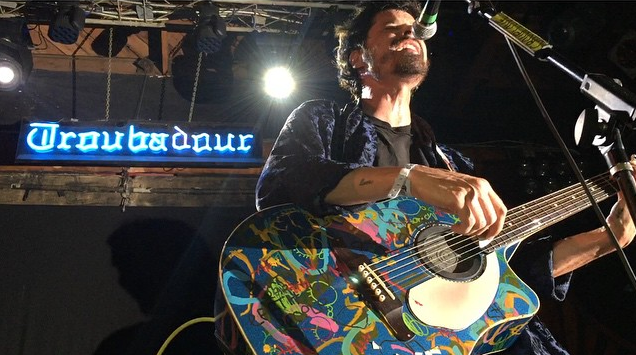 Saturday night, GROUPLOVE performed their first show in three months at West Hollywood’s Troubadour in an effort to generate money for singer and guitarist Christian Zucconi’s cousin John Toomey, who is in need of a kidney transplant.

It was a rare opportunity to see one of indie rock’s fastest-rising bands in a much more intimate setting and they did not disappoint. Along with churning out fan favorites, GROUPLOVE added a song to their encore that wasn’t previously planned — a cover of the Beastie Boys classic jam “Sabotage” (watch the video below). The band mentioned having only played the song at Lollapalooza last year. Both Zucconi and vocalist Hannah Hooper showed their rhyming skills during the inspired performance.

The crowd was very familiar with the band’s material, singing along to nearly every song — from “Itchin’ on a Photograph” to “Lovely Cup,” from “School Boy” to the hit that put them on the map “Tongue Tied.”

During their encore, the band also performed “Cruel and Beautiful World” off-mic to the silence of the crowd. Drummer Ryan Rabin mentioned they used to perform the song in that fashion and hadn’t done it in years. They were shockingly able to get a Los Angeles crowd to pipe down long enough to perform it, and it was quite memorable (you can watch the video below).

There was even a man who painted his face and wore sunglasses as to bear the resemblance to the cover of GROUPLOVE’s album Spreading Rumours. The band brought the fan on stage during the final part of the encore and at least three or four people body-surfed, including the face-painted fan. Afterwards, he grabbed the mic long enough to share how it was one of the best nights of his life due to jumping on stage with his favorite band.

This is what live music is all about and it was awesome to see someone grab ahold of their dream for even a couple of minutes. The band was very welcoming and the vibe was just really upbeat.

For those of you who couldn’t make it to this incredible Grouplove benefit show and would still like to donate, you can do so here.
Words: Mark E. Ortega