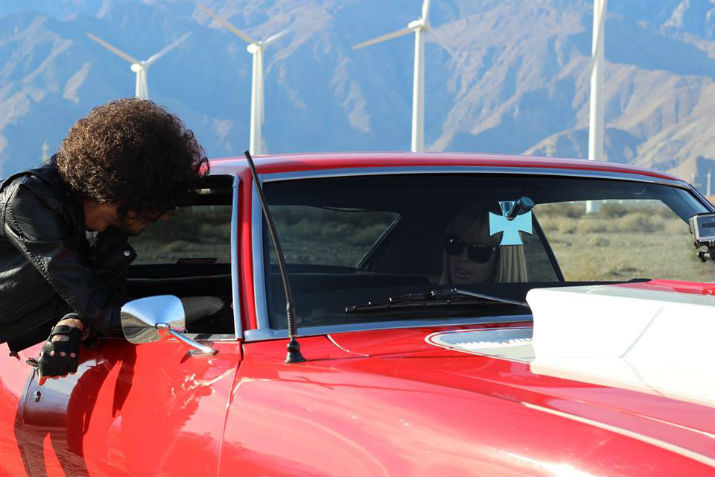 Los Angeles duo The Two Tens have a penchant for adrenaline pumping garage-punk songs and their new music video, “Rush Out,” which Grimy Goods has premiered today, is a perfect visual match for their revved up, rock ‘n’ roll sound. For the vintage cars, the band reached out to some good friends, and ended up borrowing a 1970s Ford Maverick from Bonnie Buitrago (of Nashville Pussy) and Larry Ramirez’s (of the Lonesome Ones) 1968 Chevy Camaro. Director Matt Carrillo got those speed-fueled action shots by attaching GoPro Cameras on the cars, as well as using a drone, and had the band speed towards each other. There’s no doubt that watching this video will make you feel like you’re right there with the band letting loose in the desert and putting the pedal to the metal.

Guitarist/vocalist Adam Bones on the making of the video:

“While waking up at 3:30am to do a vid shoot was rough, we knew we wanted to get to the desert in the Palm Springs area at sunrise so we could get some shots of us performing with the sun lighting us up while we were rocking. Rikki did a great job of scouting a location. Also, the street name was Diablo, which we thought was pretty bad ass. Hopped up on donuts and coffee and freezing our butts off, we set up our gear and started to shoot. Once the sun came up, we noticed you could still see the full moon in front of us.  With the windmills, full moon, and sunrise, it made for a pretty religious experience.”

The fast paced fun doesn’t stop there. The Two Tens will headline The Satellite tonight, Tuesday, 2/10 for their EP Volume 3 release show. Supporting acts include Des and the Cendents (all female Descendents cover band), Shady Francos and Exes.

Watch the video for new single “Rush Out” here first and then catch it live on the big screen at the show!  Also, the first 50 people to buy an advance ticket for the show, using the promo code VOLUME, will receive a free download card of the new EP Volume 3.

GET TICKETS TO THE TWO TENS AT THE SATELLITE!