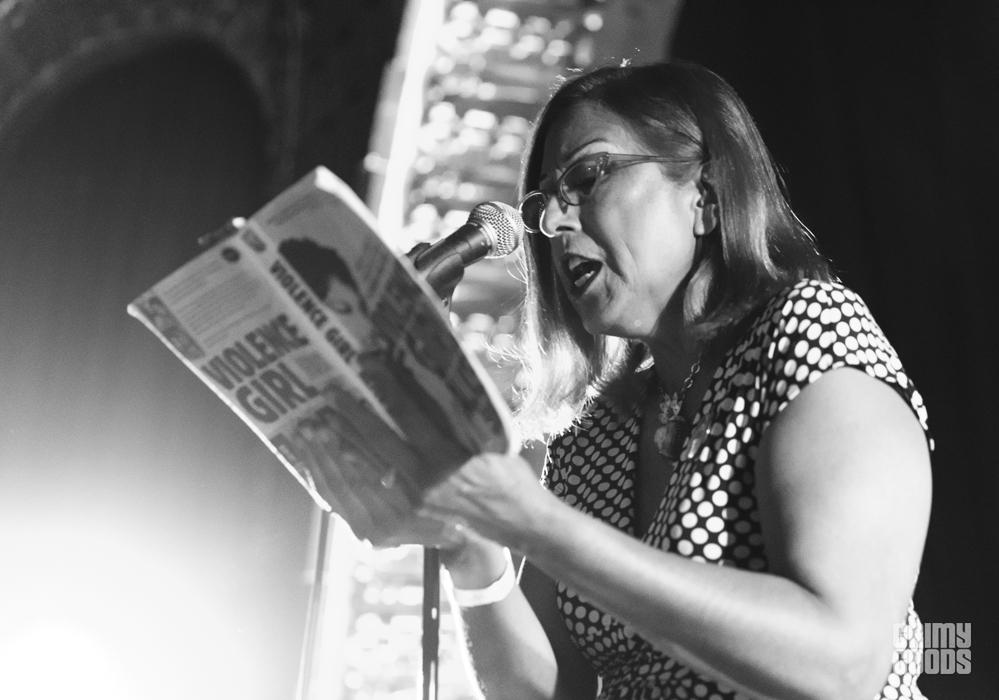 Educate yourself. Empower yourself. Change your world. While those words of wisdom may sound a little cliché, when Alice Bag says it, it strikes a chord within you and you believe it. The famed punk rock singer (The Bags, Alice Bag Band, Cholita, etc), feminist, educator and author recently released her self-published, diary-style memoir “Pipe Bomb for the Soul” which recaps her time spent in Nicaragua in 1986 during the Sandinista revolution. Bag also reflects on her experiences and personal growth that she gained as a result of fully integrating into Nicaraguan life, family and sense of strength discovered in her support and solidarity with the revolutionary cause and the people fighting for it.

In support of Pipe Bomb, Bag has been making appearances throughout Los Angeles and I was lucky enough to catch her performing songs and reading excerpts from her new book at Espacio 1839 in Boyle Heights. Bag’s honesty, understanding and wits were, and are, truly captivating—and I came away from the reading experience inspired; inspired to question everything, learn from my mistakes, keep an open mind, participate in the art of conversation, and not to settle into being a passive bystander in my own life.

I chatted with Alice Bag to learn more about her new book “Pipe Bomb for the Soul,” the Sandinista revolution, punk rock and more. Read her book, and read on!

GG: You recently made a guest appearance at a Los Crudos show at the Ukrainian Culture Center, reading a poem from your first book, “Violence Girl.” What do you hope the younger generation of Los Angeles punk rockers learn from your early experience at the beginning of the ’70s L.A. punk rock scene?

AB: I read an excerpt from my book “Violence Girl” but I know some folks thought it was a poem. I think it’s important for the younger generation to see that there were people like me who helped create that early scene. Punk has been portrayed as music for and by angry white males but in its inception it was a rebellion against all rock cliches. Gender, ethnic, sexual and class taboos were all challenged by our early punk community and that is not a story which is often told. You certainly don’t get that picture from many books or documentaries about punk. People of color, queers and women – all were present from the inception of punk but their stories are seldom told or heard. Punk should be about inclusion. 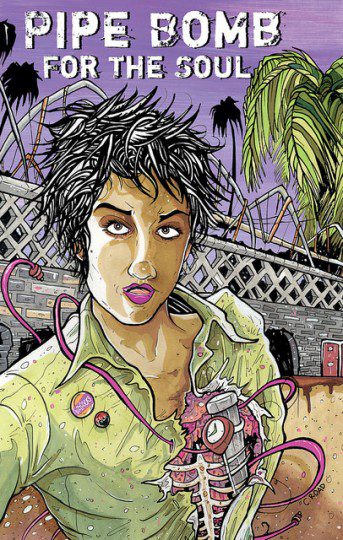 GG: Your new book, “Pipe Bomb for the Soul,” is an intimate look into your time spent in Nicaragua during the Sandinista revolution in 1986. What prompted you to make the trip there? What was the most defining moment of your trip?

AB: Several things prompted me to want to go to Nicaragua. I was an elementary school teacher at the time and a number of my students were from Central America. I realized that I didn’t know that much about Central American culture and traditions. I also knew that many of the countries in Central America were going through dramatic changes, in particular Nicaragua.

Around this same time I had read the book Pedagogy of The Oppressed by Paulo Freire and it struck a chord with me. He described a process he calls the Banking Method through which educators effectively turn students into receptacles to be filled with the values of the ruling class. The process is likened to making deposits into a banking account, it effectively turns students into passive learners who memorize and regurgitate information but are never taught the value of discussion and critical analysis. Freire’s ideas intrigued me and when I found out that he had helped with planning the Sandinista Literacy Campaign, it really cemented my desire to visit that country and see what types of results the campaign had yielded.

GG: While in Nicaragua you were exposed to a lot of strong female/matriarchal figures, such as Nicaraguan activist leader Gladys Baez. Who are some other strong female influences that you admire – musicians, artists, revolutionaries, etc?

AB: I admire Sojourner Truth’s strength and endurance. Malala’s courage. Bessie Smith’s sensual and emotional vocals, I could go on and on. You know these days I really try to focus on the attributes rather than the person simply because people can be full of contradictions. We’re all in the process of growing and that means making mistakes. So my real heroes are the ideas and actions of these women. I also like the fact that when you focus on actions and ideas you appreciate the process more and you realize that while there is only one Malala, there are many opportunities where we could make brave decisions in our own lives. 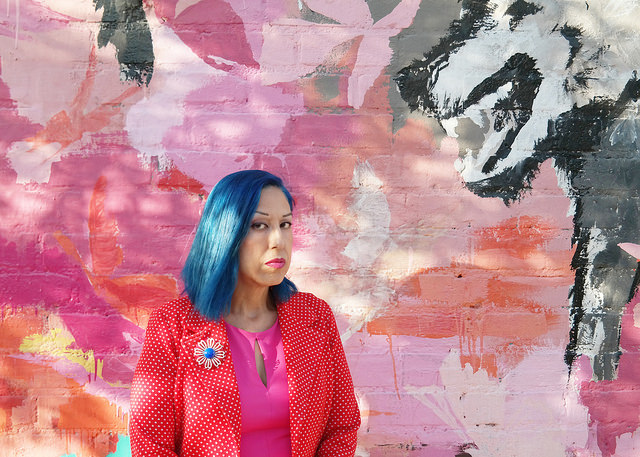 GG: What advice would you give to Angelenos, especially up and coming artists (and artivists), who are interested in getting politically active but aren’t sure where to begin?

AB: I think the perfect place for anyone to begin making change is by making sure that his/her actions reflect the values that they have consciously and critically decided to embrace. Whatever your beliefs are, make sure you know WHY you believe what you believe. We can only convincingly advocate for causes that shape our actions. Once you start doing that, you will attract like-minded individuals, and opportunities for you to contribute will find you.

GG: In another excerpt from the book (p.91/92), you describe a time when your Nicaraguan host sister’s boyfriend sat outside your door playing guitar and serenades. Can you elaborate a little on how the experience of being an active music participant (singing/fronting a band) compared to this alternative experience of being an active listener in such a wildly different setting?

AB: That serenade really touched me because it was a very personal heartfelt gift. I had watched serenades in old movies and I thought they were primarily romantic gestures from a bygone era but to have friends sing on your doorstep just to you is very sweet.

GG: What’s the number one thing you hope that readers will come away with after reading Pipe Bomb for the Soul?

AB: First of all, I want to clarify that Pipe Bomb for the Soul is not a follow up to my first book, Violence Girl. Violence Girl is about how punk rock happened. Pipe Bomb is punk, punk in spirit, punk in action, punk in how the actions we take or do not take, shape our world. I hope readers will look at their own lives and asses whether they have been subjected to the banking method. As a former teacher with over twenty years experience, I can tell you that the Banking Method is common practice in our schools. Children are taught to take tests, they’re fed information and asked to spit it back on a Scrantron in the form of pencilled in ovals. I’m not saying all memorization of facts is bad, but I am saying that there is a need to empower students to learn that their opinions matter, to know why they’re learning something, to develop deductive and inductive reasoning skills, to question authority and to learn how to listen to and respect differing opinions.

GG: What bands and/or visual artists are you currently listening to / into?

AB: The Sex Stains, Trap Girl and No Small Children are some of my favorite local bands. As far as visual artists, I love the artwork of Cristy C. Road, Shizu Saldamando and Diane Gamboa.

To purchase “Pipe Bomb for the Soul” online click here.

Wanna see Alice live? Catch her performance and “Pipe Bomb for the Soul” reading this Sunday, July 19th at the Punk Meets Art – The Photos of Louis Jacinto exhibit at Avenue 50 Studio in Highland Park. 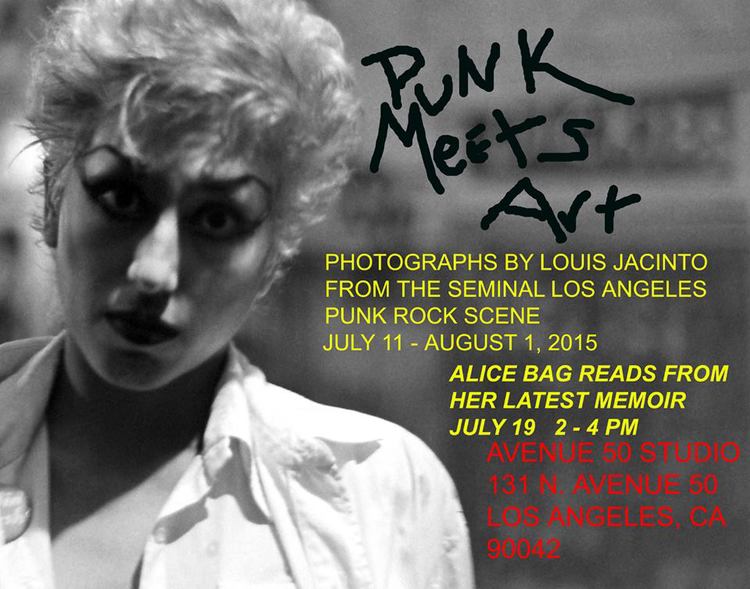 The Best Ladies Night That Ever Was: Burger A Go Go! Featuring Sex Stains