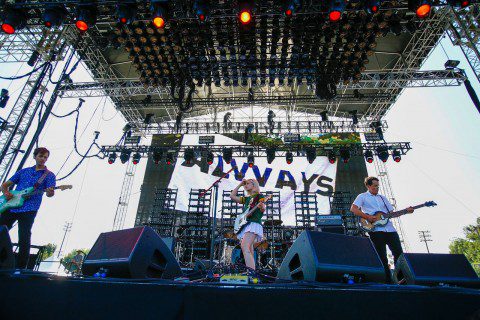 Lo-fi indie rock favorites Alvvays have announced a date at the Echoplex for November 19. They’ve been quite the buzz since releasing their self-titled debut full-length in 2014.

It’ll mark the band’s first performance in LA since a rousing set at FYF Fest a few weeks ago where they drew quite the crowd early in the afternoon on the main stage. We covered them in June when they played the Sweetgreen block party and can guarantee their live show is not something you want to miss. There’s a reason Death Cab for Cutie’s Ben Gibbard was fond enough of their sound to cover their hit, “Archie, Marry Me.”

Lead vocalist Molly Rankin has proven to be a very adept songwriter, particularly when writing about love and all the headaches that come with it. Their album is strong from start to finish and they are unbelievably charming on stage.

GET TICKETS TO ALVVAYS AT THE ECHOPLEX