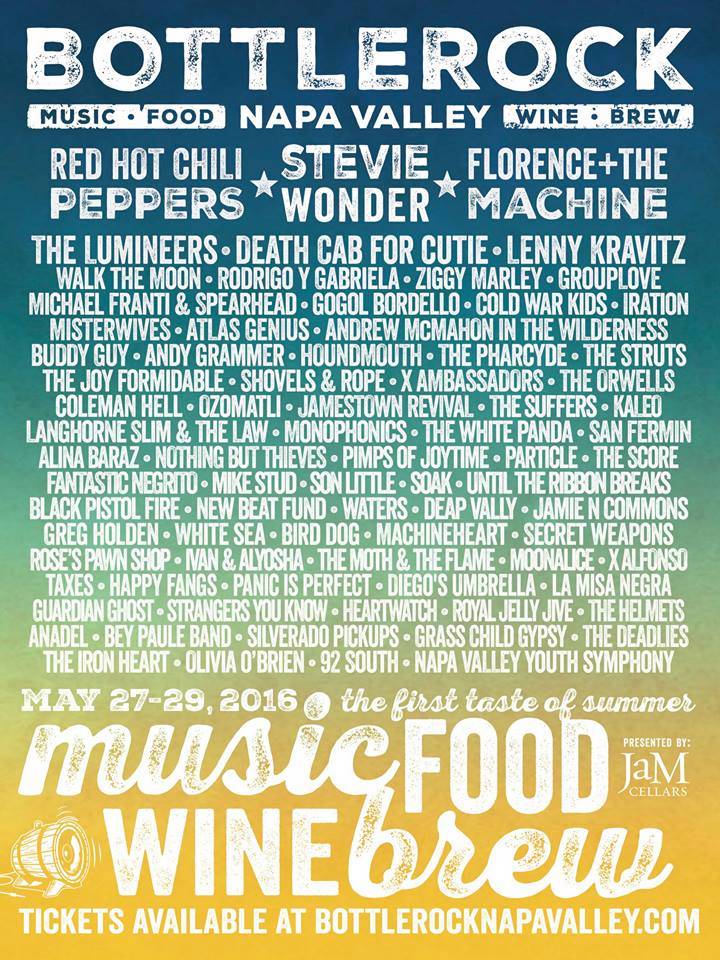 The fourth annual BottleRock Napa Valley is nearly upon us, but so is nearly every other music festival on the planet. In an increasingly competitive market of music festivals competing for your cash and overtly saturated by big name headliners, choosing the right event can be a brutal decision process. If you’re a California native, the difficulty of this age-old, internal struggle is multiplied by the growing number of music and arts festivals popping up all over our Golden State. The wisdom of awaiting the announcement of headliners before purchasing a festival ticket can sometimes be a futile attempt to tip the scales in favor of one festival over another, especially when multiple bills feature the same big names at the top.

So how do you sift through the once crystal clear waters of festival season to find the perfect music festival vacation? Well, you’ll probably have to dig a little deeper than the headline page of a festival’s website to find out–but if you’re looking for a festival that really gets at the heart of what it means to live in California, look no farther than BottleRock. Whether you’ve lived here all your life or you’re looking for an excuse to finally head west, the promise of seeing legends like Stevie Wonder and the Red Hot Chili Peppers against the picturesque backdrop of our historic wine country is an experience not easily passed up on. But maybe you’re still not impressed–Florence and the Machine? Death Cab for Cutie? Bob Marley’s son? So they wrangled up some big names and set up shop at one of California’s dozens of beautiful locales, so what? Much in the way you were asked by your first grade teacher back in elementary school, you want to know what makes it so damn special.

Wine, wine makes it special–oh, and beer, tons of beer. Need some food to wash down all those spirits and craft brew concoctions? They’ll have you covered with the finest cuisine, dished out expertly by a panel of chefs and food gurus at a specially curated Culinary Stage. Fancy yourself a beer or wine aficionado? Maybe even a “foodie”? Then you might find yourself onstage rubbing shoulders with Master Sommeliers, celebrity chefs, and dozens of the region’s finest vintners, restaurateurs, and brewers, competing to create your new favorite dish.

A lot of festivals make boastful claims about having the best in beer and wine; then you show up to find only a dry wasteland, dotted only by outrageous and cruelly priced Coors and Bud Light vendors, as crowds of hollow souls shuffle past you holding $20 cocktails. You know what goes well with a $10 can of Coors Light? Nothing. You can’t listen to Stevie Wonder drinking Coors Light, that’s not okay. You can get away with that crap at a Nickleback concert.

But this is Napa Valley, where the hills run red and amber year-round. What’s actually insane is that this all included in the general admission experience, but BottleRock being BottleRock is also offering VIP and Platinum passes to the truly hardcore festival-goers that want to overload their sense in a borderline frighteningly spectacular fashion. The VIP pass holders will be able to lounge around in their own separate village, complete with exclusive culinary and alcoholic offerings, not to mention skydeck viewing seats, intimate acoustic shows, DJ sets. Then there’s Platinum, which is pretty much the equivalent of an “All-Access” pass that includes meet-and-greets with artists, a lounge next to the main stage that features gourmet tasting menus, as well as complimentary craft beer, wines, and cocktails.

So if you don’t want the epitome of the Californian music festival experience, and you also hate ridiculously delicious food, wine, beer, and music in general, then you should definitely avoid BottleRock (and pretty much any other enriching or remotely fun experience you might encounter in the future). Single-day passes are still available for purchase, with GA starting at $109.