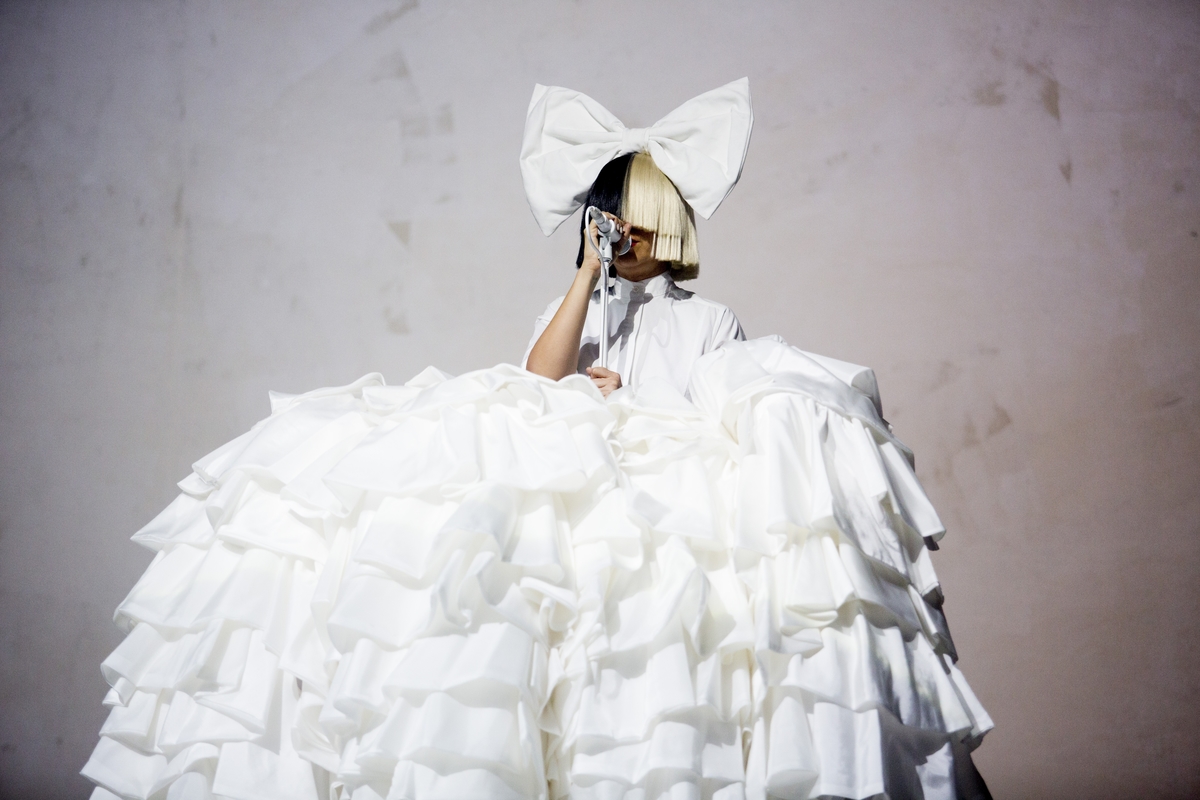 Renowned Aussie singer-songwriter Sia hasn’t performed a full show hardly anywhere in years. When she was announced as part of Coachella’s bill this year, she was instantly on most people’s can’t-miss lists for the weekend. On Sunday, she more than justified the hype with the kind of performance that people will be talking about for years.

Moments into the opening song “Alive,” it became clear that this was not going to be like any other set in the desert that weekend. She stood behind what looked like the bottom of her dress, but instead it was a group of people all fluffed up hiding a dancer that donned the same outfit from the music video for the same song. As Sia hit all the high notes, singing “I’m still breathing,” the dancer was just the beginning of what could be considered more performance art than concert.

There were appearances from a number of celebrities who helped act out things during Sia’s extremely captivating performance, herself just standing behind the microphone belting out all the hits. Kristen Wiig, Paul Dano, Tig Notaro, as well as Dance Moms star Maddie Ziegler all took part, with Dano serving as a sort-of customer service representative answering calls between songs. 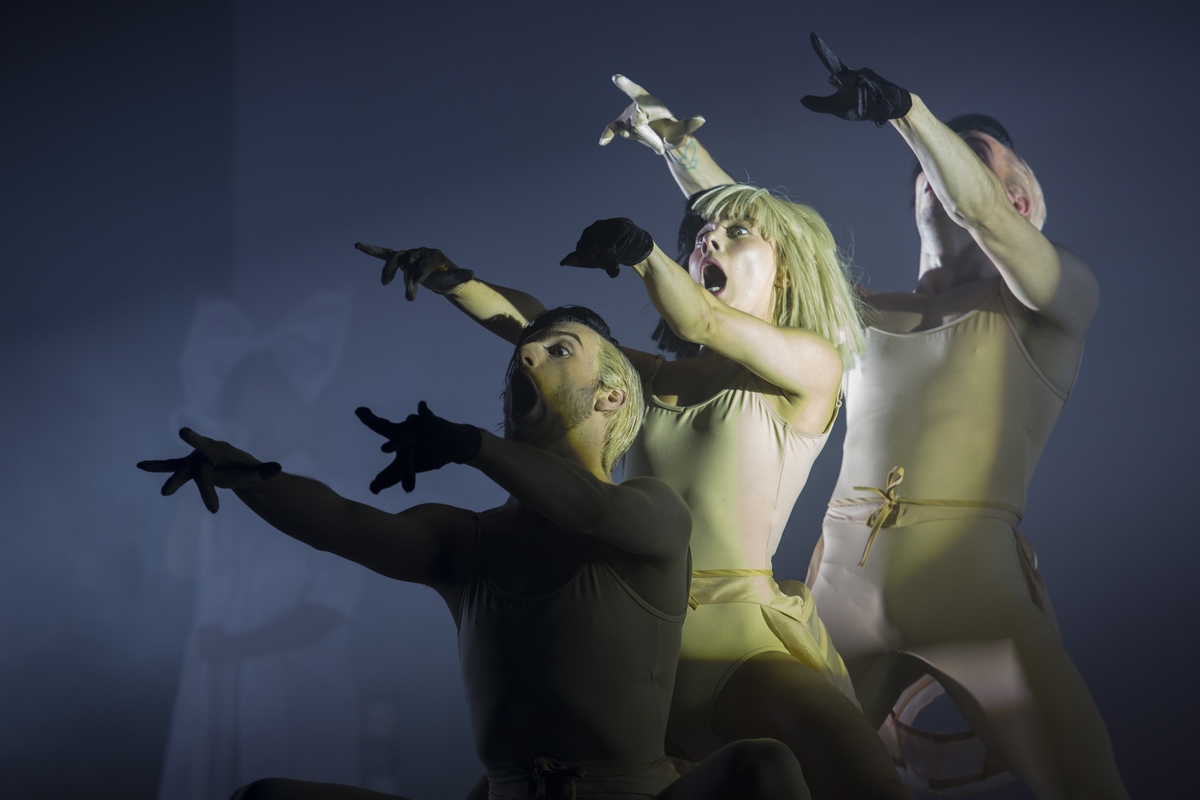 What makes this all the more breathtaking is Sia’s voice alone is enough to make her a second-line act at any major music festival. You add in all the production and theatrics that went behind this performance, and it’s clear that she could headline these very same festivals in the not-too-distant future.

Her difficulty dealing with fame makes it seem unlikely, but on talent alone she proved on Sunday she is more than capable of carrying the weight. In a way similar to how Florence + The Machine stole the thunder from Drake on the final day of last year’s Coachella, Sia did the same from 2016’s Sunday headliner Calvin Harris.

Sia delivered all the hits with oomph and emotion, from “Elastic Heart” to my personal favorite “Breathe Me,” finally finishing with “Titanium” and “Chandelier.” The final song sounded even more bombastic than normal and it was the perfect way to wrap-up a performance that’ll be etched in many people’s memories for years to come. 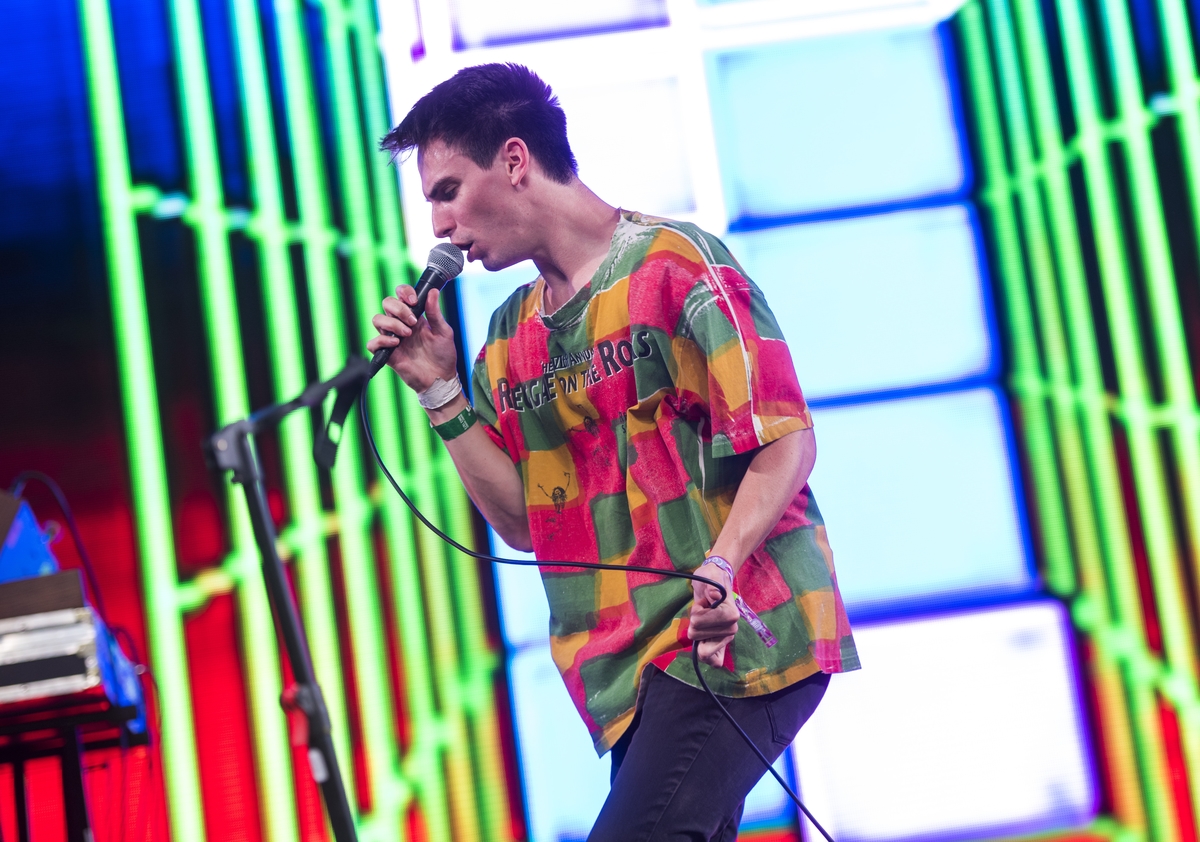 My day began with catching Glendale-based post-punk band De Lux in the Mojave tent. They brought a lot of funk, and vocalist Sean Guerin has a certain David Byrne of Talking Heads quality to his vocals. A lot of fun was had despite the brevity of their set. Guerin hopped off stage and ran into the crowd and the crowd in the front rallied around him in a circle and jumped around him until he returned. At the end of the song, a good Samaritan was walking around with a shoe in the air, ultimately finding its rightful owner in the crowd. Even though early-day Sunday sets are the lightest crowds because the massive amount of booze and drug hangovers people are dealing with by the festival’s third day, those that caught De Lux were into it — even if they were sitting on the ground they were bopping their heads.

I’ve never in my years of attending music festivals gone to a set and looked around and saw that the crowd was overwhelmingly Asian. It made it ultra clear why Epik High became the festival’s first K-pop (more like rap) act in their history, because it was pretty full despite occurring around 1 PM. “A lot of people ask what a Korean group is doing at Coachella, we are about to show you what a Korean group is doing at Coachella,” one of the members said midway through their set. While the music isn’t exactly in my own personal wheelhouse, the group definitely knows how to write a catchy hook. They interspersed samples from the Star Wars universe, from the movie’s opening theme to the Darth Vader theme. This came in between their rap tracks that had simple but easy to relate to American lyrics such as “No reason to live without you” from the song “Map the Soul.” 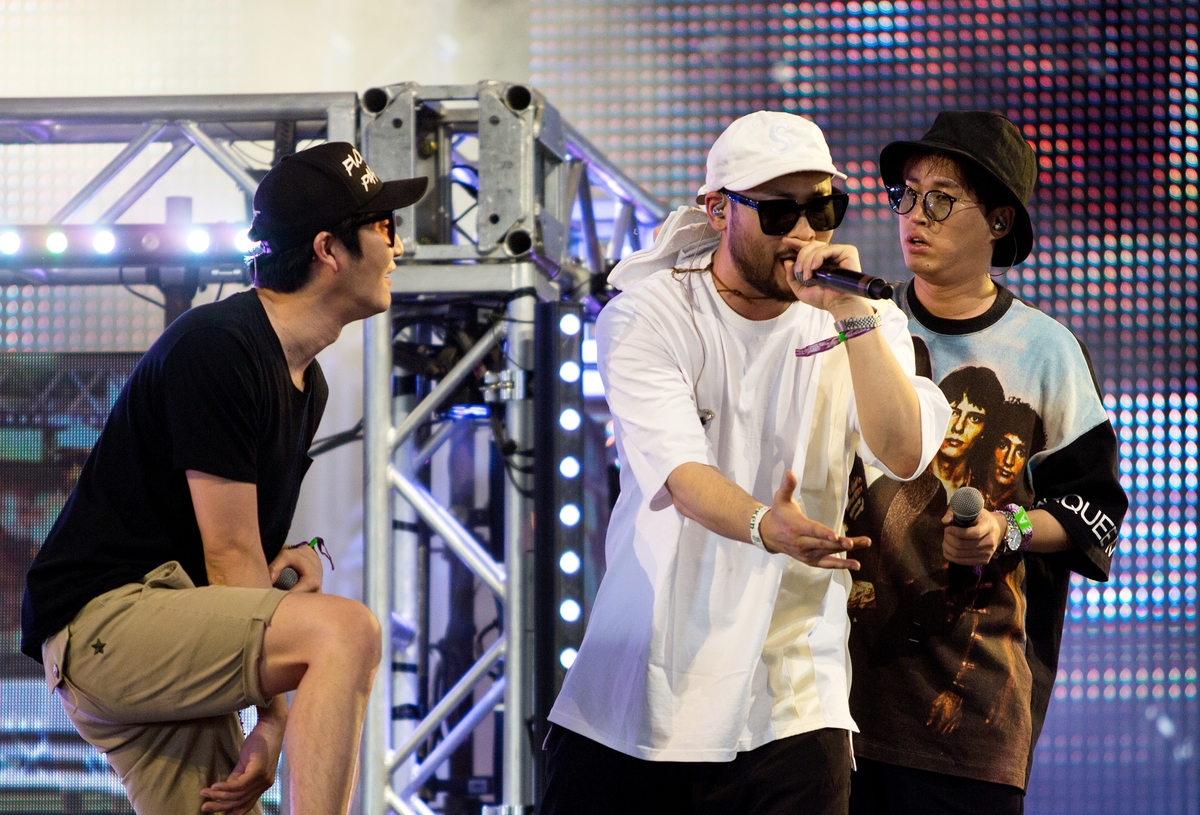 “I know it’s a long shot but if you’e got extra drugs, please throw them on stage,” Nathaniel Rateliff said midway through his set on the main stage with his band The Night Sweats. Had he been performing in a tent, he might’ve had a better shot given the closer proximity between the crowd and the stage. The Bay, Missouri musician filled the early-Sunday bluesy rock slot that’s been part of Coachella in the years I’ve attended. Rateliff banged on a tambourine vigorously before launching into “Out on the Weekend,” a perfect song for the setting. There was a large congregation of people in the beer garden adjacent to the stage really getting into it while slushing around their beers and margaritas. With trumpets and saxophones, they brought the kind of sound that the main stage needs early in the day. “Nathaniel Rateliff is like Zac Brown with indie cred, I like it,” I overheard someone say to their friend in the crowd. Amen. 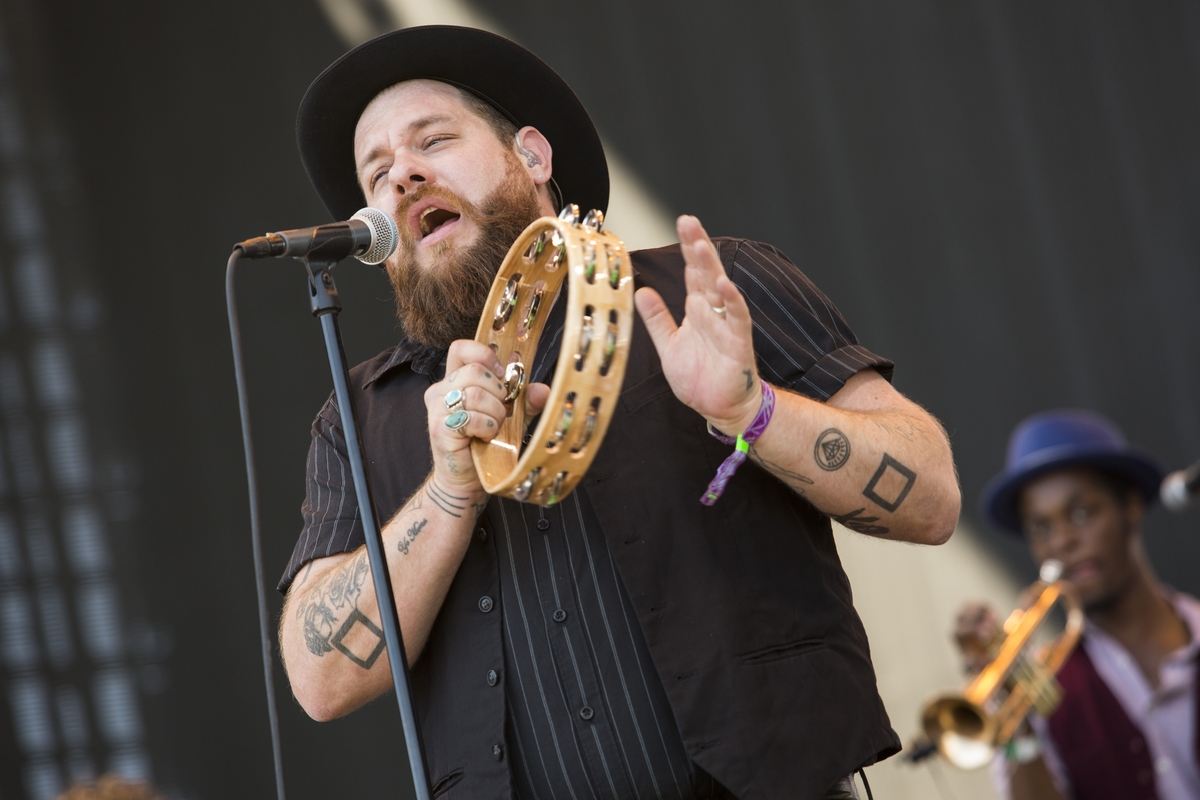 Indie rocker Meg Myers brought her dark and twisted tunes to the Gobi tent, catching a large majority of the crowd off guard with them. Though the sound was a bit rough at the start, once it got on track she was off to the races. Her band has filled out even more with a few additional members since the last time we saw her, which allowed her to perform her older song “Go” without a backing track, giving it a bit more punch. When she launched into the song’s signature screaming portion at the end, jumping around like a whirling dervish, I caught people in the crowd looking at each other in disbelief. “Lemon Eyes” and “Sorry” were the best-received songs from her debut album that came out last year, and she closed with “Heart Heart Head,” which concluded with Myers screaming and basically convulsing like a madwoman. 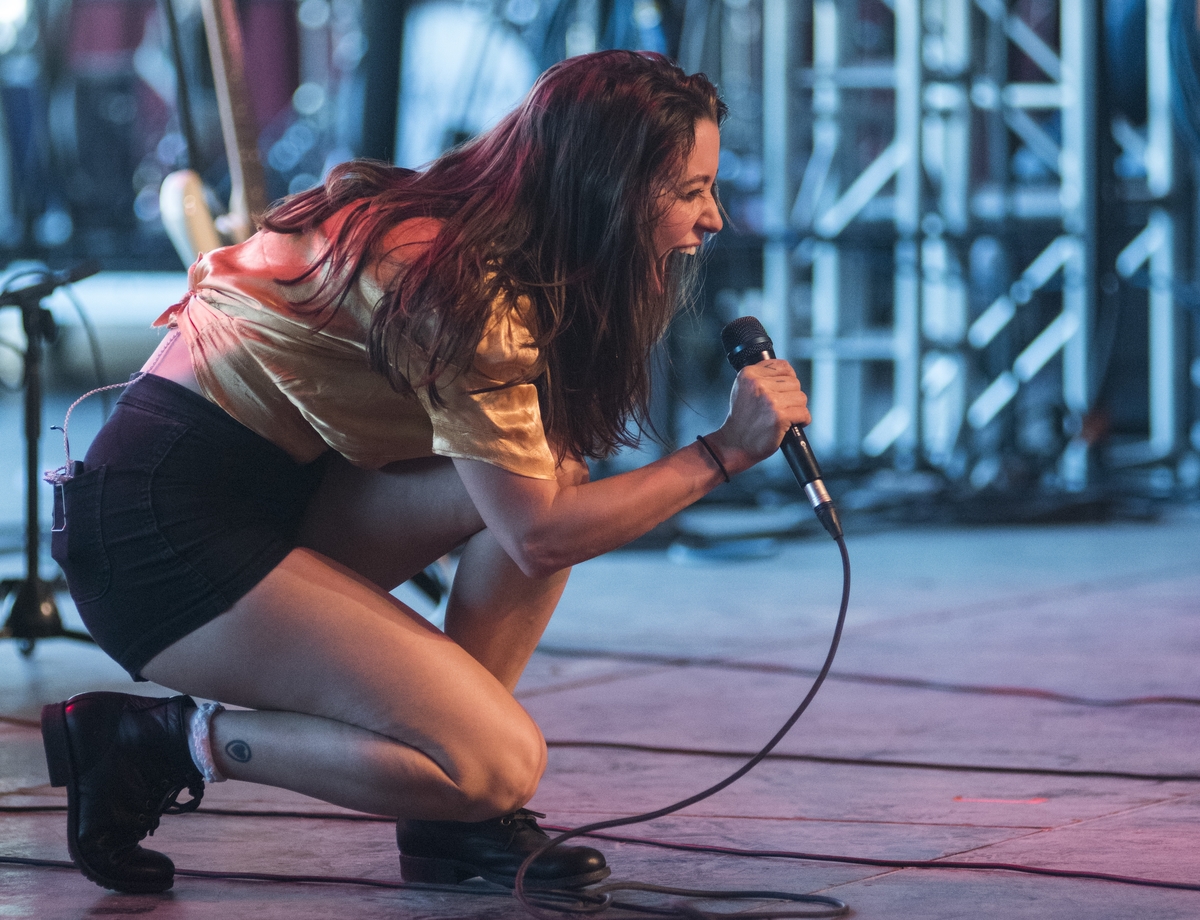 Indie singer-songwriter Pete Yorn was next in the Gobi tent, delivering a set comprised of the old favorites that landed him on the Coachella bill back in 2001, along with songs from his latest album that brought him back all these years later. It was a pretty straight-forward set — Yorn’s signature raspy vocals excited people when he played “Life on a Chain,” one of the songs that launched his career into the higher levels. It was another mid-afternoon set that people ducked into to avoid the sweltering heat, but those that did got a nice little rock set that featured nostalgia on full blast. His cover of Morrisey’s “Suedehead” was well-executed, and seemingly a hit with the older crowd that already knew Yorn’s work well. Overheard during “Strange Condition” at the end of Yorn’s set: “Is this the song from that Jim Carrey movie where he kicks his own ass? No, not Liar, Liar, the other one.” 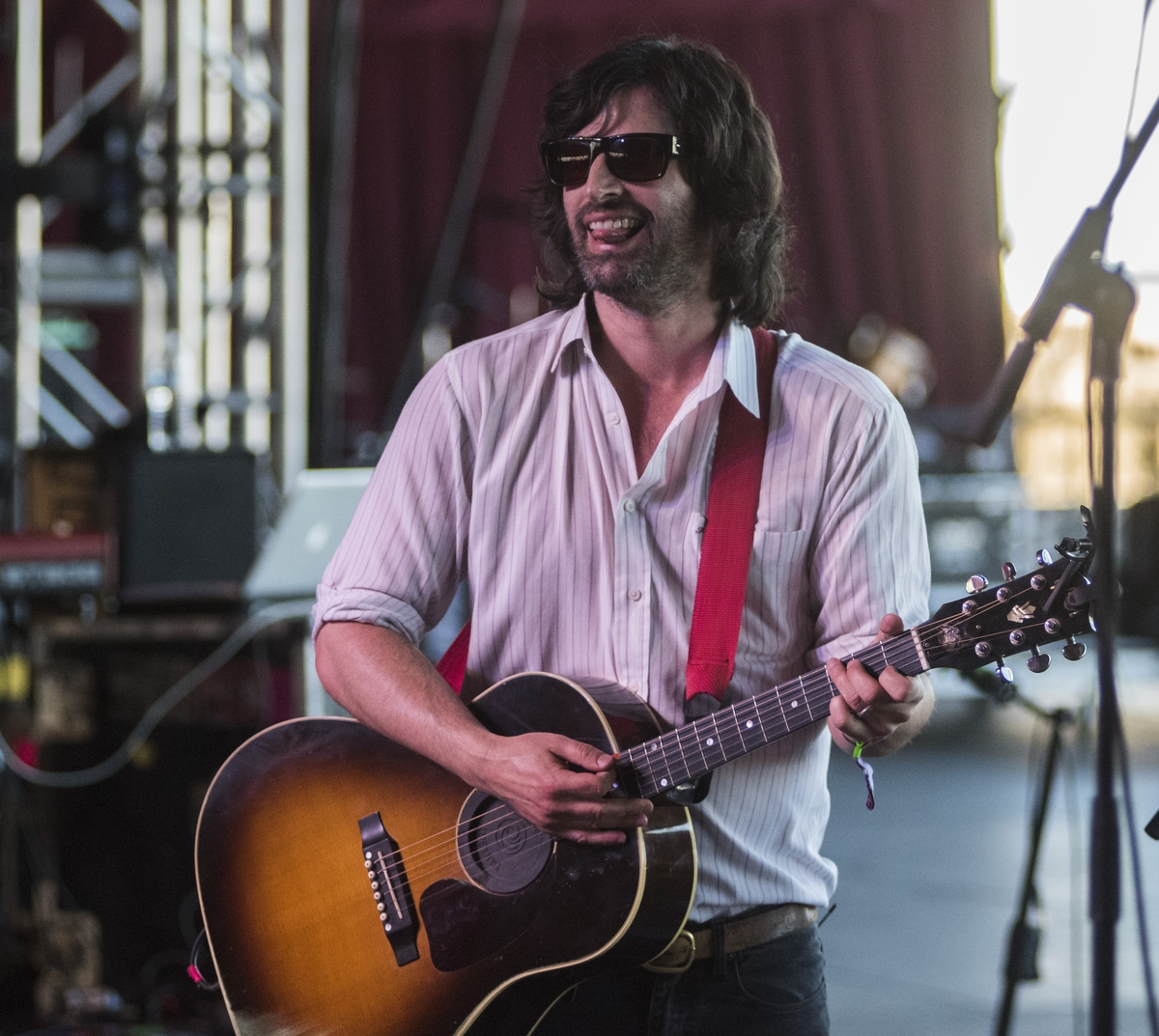 Edward Sharpe & The Magnetic Zeros have been performing the same festival set more or less for years, but that didn’t seem to affect the size of his crowd Sunday night on the Outdoor Theatre stage. There were times midway through the set that Major Lazer on the main stage drowned out some of the sound, but lead man Alex Ebert didn’t let that bother him much. At one point during the set, Ebert took a GoPro from a fan and snapped some shots with it, while later taking a hit from someone’s spliff or joint. Fans clapped in unison for the song “40 Day Dream” after Ebert said, “Come on, is this a festival or what? Go ahead, put your hands up, nobody’s gonna say you’re an idiot.” The set was closed by “Home,” but the song doesn’t pack nearly the same emotion in it since vocalist Jade Castrinos was pushed out of the band a few years ago. 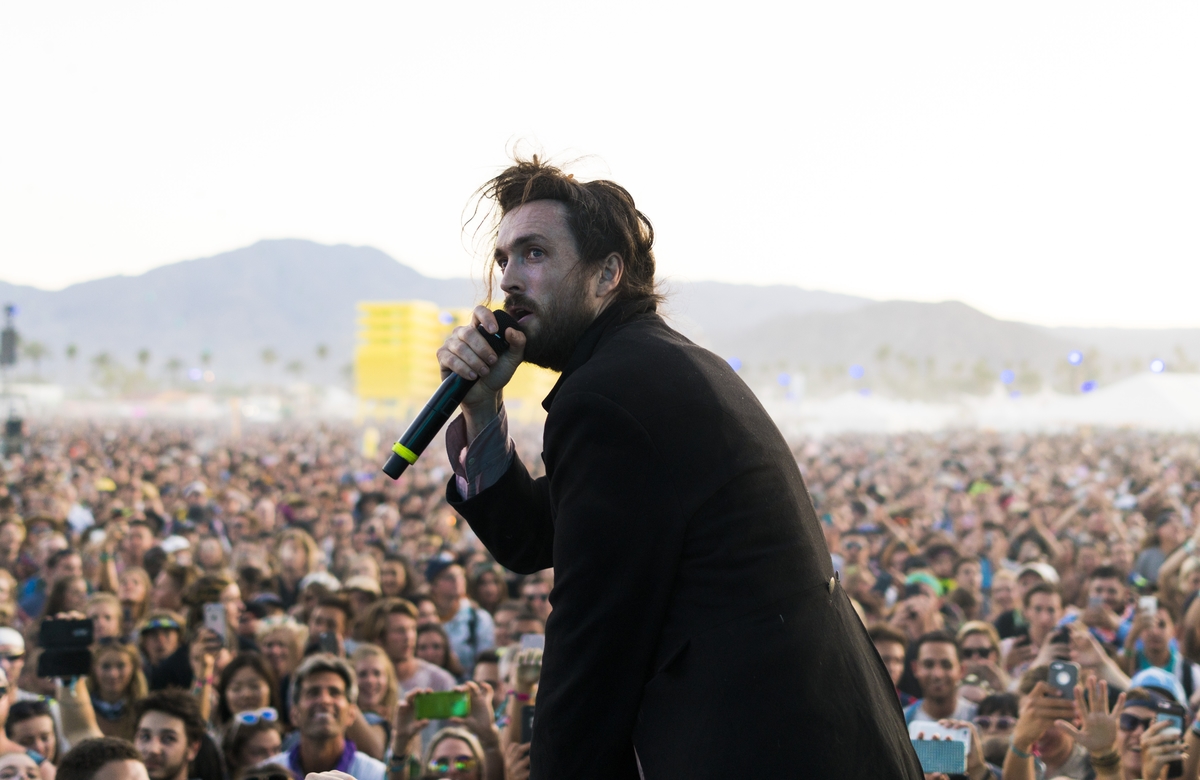 Edward Sharpe and the Magnetic Zeros

The same people that love Edward Sharpe are probably Beach House fans, meaning the Outdoor Theatre didn’t lose any volume when the dream pop group took the stage a half hour later. Victoria Legrand’s haunting vocals hypnotized the crowd into a trance, from the opening moments of the opening song “Beyond Love” until the end. The Baltimore group performed in nearly complete darkness for much of that first song before some awesome lights shone into the crowd. Where I was in the crowd, a handful of kids were tripping on mushrooms and having the time of their life, though they had to sit down at times to deal with the overload of sounds crashing into each other. Legrand rarely looked out to the crowd, bobbing her head while smashing on the keys. The set was very cohesive and it was a perfect break from the mayhem that would be the last three hours of electronic music across the two main stages between Calvin Harris and Flume. They nailed it and are one of many formerly bottom-lined acts on the Coachella poster to climb their way near the top. They earned their spot this year big time with their stupefying set. 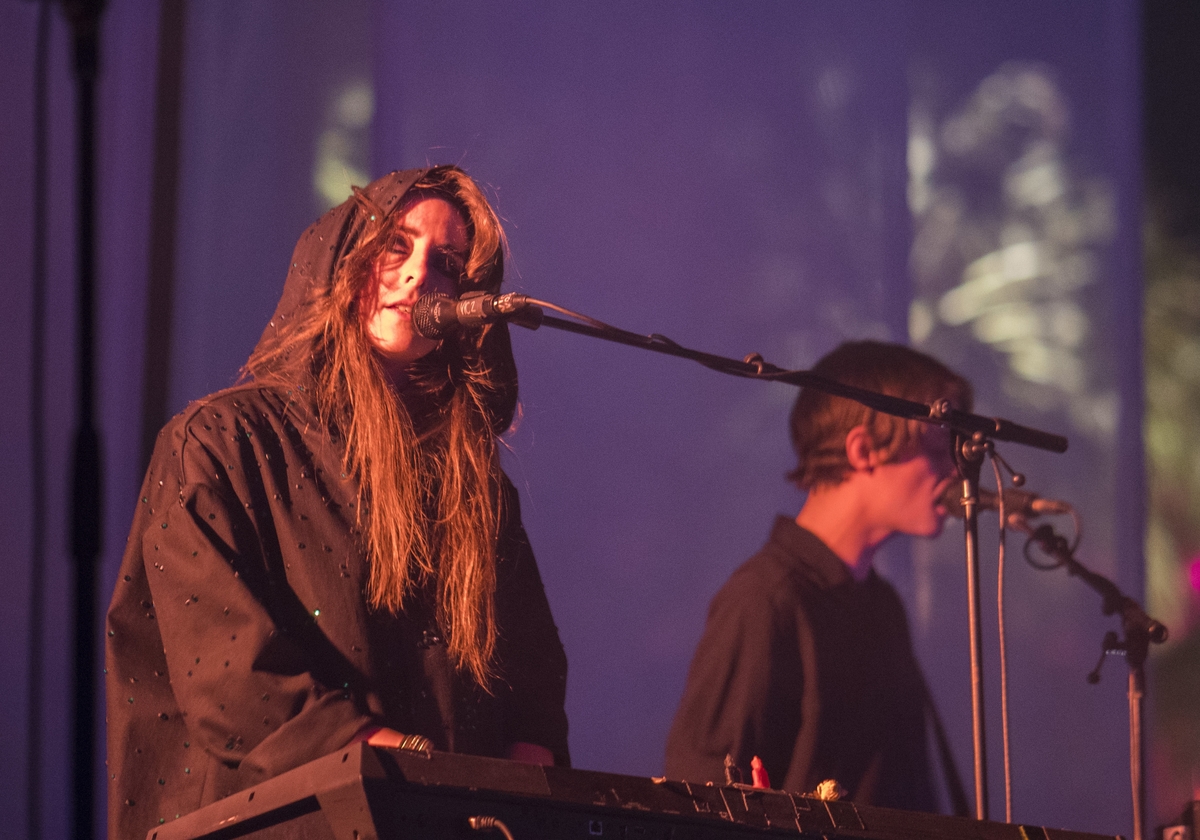 The last thing I caught on the final night of Coachella weekend one was some local Los Angeles flavor. Nosaj Thing closed out a sparsely attended set at the Mojave tent. He sparsed in some killer beats with some mind-numbing ambient noises. People were clearly in the midst of their comedowns from a long weekend of excess partying and bad decisions, and Nosaj Thing took his position as the last set of the festival seriously enough to give them a really helpful set to fall into. The visuals were pretty trippy, with a nice light show accompanying their pretty intricate video setup. 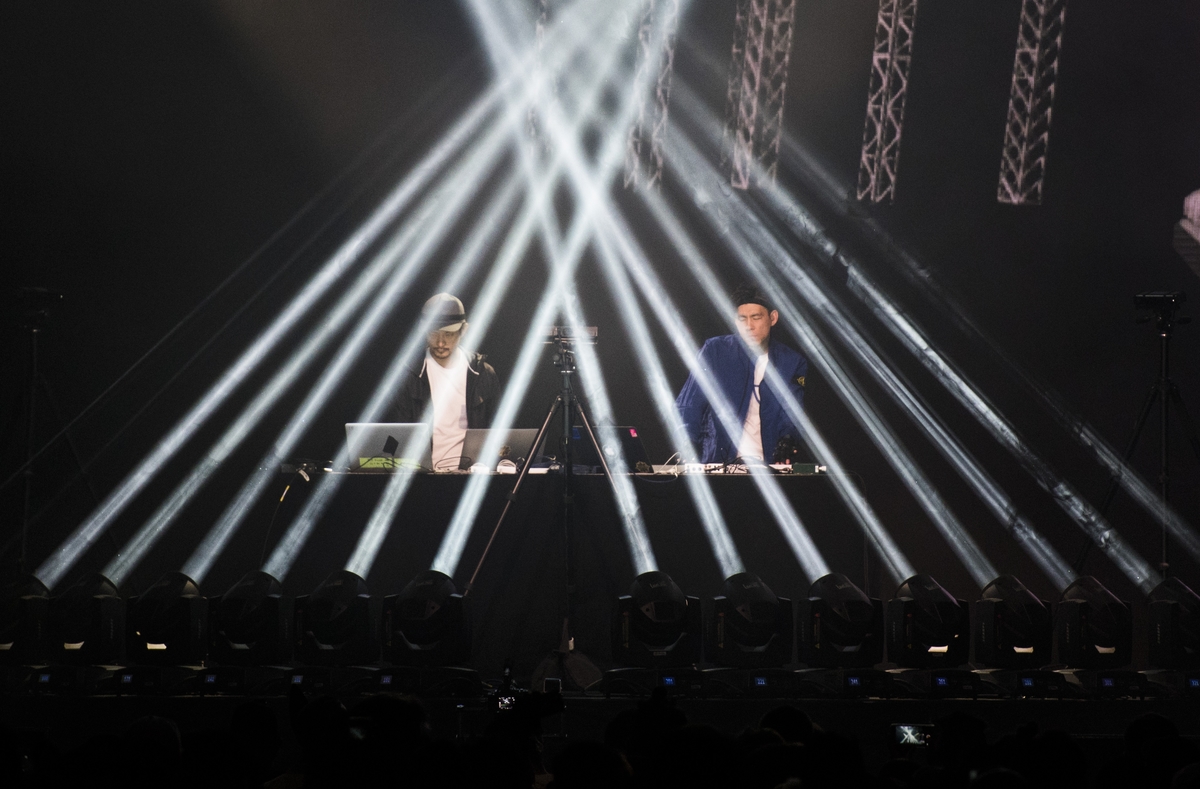 Coachella 2016 was quite a rollercoaster, definitely delivering big on the promise that is made every year that they are the marquee music festival in America. They continue to improve on things year-to-year, the biggest this year being making the Sahara tent not just electronic music, but also adding a hip-hop element. That made it less likely for people to camp out at the tent all day long, allowing new blood to shuffle in and out. The sound from the main stage was also loud enough you could hear it from way back, all the way where the Yuma tent was pretty much. That made getting food and meeting up with people more enjoyable because you got to hear the weekend’s biggest acts while doing it. Now the only question that remains is, how do they top a Guns N Roses reunion in 2017?

Grimes battles Guns and Roses for Coachella crowd, takes fans into the Belly of the Beat

Sharper than ever: LCD Soundsystem nowhere near losing their edge close out day one of Coachella