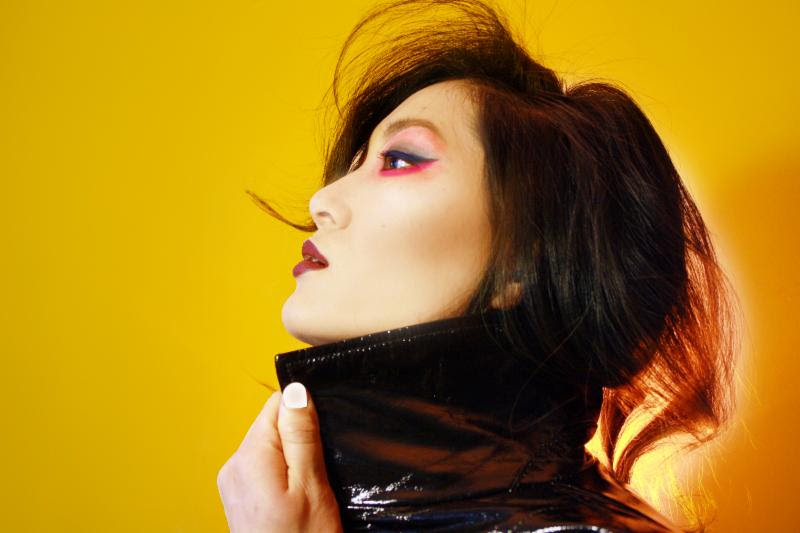 Charlene Kaye is tired, she has to be, but the eager excitement that gushes from the other end of the phone line seems to overwhelm whatever physical exhaustion she’s carrying. In between her return home to New York from Singapore and a quickly approaching Canadian tour with San Fermin, she finds time to hold a slew of phone interviews (we speculate maybe even eat and sleep) that circle heavily on the anticipation of the release of her Honey EP as KAYE. She’s a machine; but not in the cold, unfeeling, and emotionally disconnected ways that come to mind with such a description. Even over the phone she’s quite affecting, she speaks quickly and urgently, with the invigorations that her passion for music gives her seeping smoothly through the line until you find yourself unawarely invested in her story as a musician.

That story began long before she found herself as the new co-lead singer for Ellis Ludwig-Leone’s collective San Fermin, for which she has made a name for herself bringing to life the mystic and endearing complexities of his compositions with her stratospheric range. But Kaye didn’t start out as a singer, in fact, her plans for a musical career never even factored in the possibility–she was too busy trying to learn every instrument her parents shoved into her hands as a child.

“I loved singing but I didn’t consider myself a ‘singer’, so I decided I’d just be good at guitar and so I’d learn Weezer and Van Halen songs and try to nail that. And that was actually born out of a resistance to playing classical piano because I was a terrible sight-reader, and to this day I’m a totally defunct classical musician,” she says with a laugh. “But guitar helped me fall in love with writing because I could play the songs I heard on the radio, and it was a huge breakthrough to realize, ‘Oh hey, I can make the sounds that my heroes are making,’ or to recreate that tone of distortion from Nirvana’s ‘Bloom’ and thinking, ‘I can do this too.’”

That’s one of the first things you learn about Kaye–after understanding just how voraciously she ingests and produces music–she’s a rockstar. Behind all the angelic trills, choral harmonies, and orchestral swells that she finds herself singing with San Fermin, there’s a badass guitarist salivating at the opportunity to just shred in front of screaming crowds–something she does every now and then in Guns N’ Hoses as Gash (Slash), an all female Guns N’ Roses tribute band. I was even lucky enough to catch her at Sasquatch last year rip open a gnarly cover of Weezer’s “Buddy Holly,” and her chops pretty much blew away the crowd. But the erratic tendencies of Kaye’s influences are most visible on her solo work, a career that took off with a Kickstarter for her second studio album Animal Love that was funded entirely by her fans. 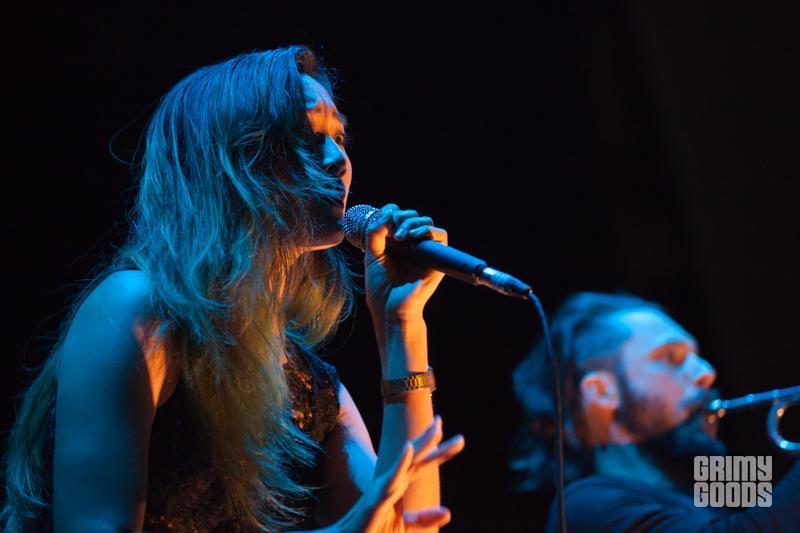 “After that I wasn’t sure exactly what step I wanted to take, I was playing around with a lot of sounds, genres, and just banging my head against the wall trying to find something that felt true to me as an artist, and I couldn’t find it,” Kaye explained, searching carefully for the words to describe her frustration.

“I’m sure many artists can relate to that feeling when you’re writing and you’re trying to find a counterpart in your work to what you as a human represent. You’re trying to find your identity, and it feels very much like you’re also finding your artistic identity, because the two are so intertwined for songwriters.”

Jumping from producer to producer, spending most of her time writing and then rewriting, eventually the agony just boiled over for Kaye and she decided to just stop:” It wasn’t flowing the way I feel true inspiration does and it felt like I was just manufacturing something that wasn’t totally there.”

So she took a step back and stopped focusing so heavily on her music. She started playing in other people’s bands, did some freelance design work, and taught music lessons–and then, in true New York fairytale fashion, came her big break with her introduction to Ludwig-Leone. At first the blessing seemed almost bittersweet, as Kaye struggled with filling the shoes of the band’s previous singers, as well as reconciling the fact that she would be solely a singer and not a songwriter.

“I’ve always written and used it as a means of catharsis, and San Fermin is very unusual in that Ellis writes all the music and lyrics but he doesn’t sing,” Kaye recalled. “It was a daunting process to become essentially the new face of this band along with Allen, and not be responsible for the words coming out of my mouth. There was a little bit of a disconnect at first, because the two singers that had occupied that space before were the girls from Lucius and their previous singer Rae [Cassidy], all of whom are phenomenal singers, so it took a while before I didn’t feel like I was just singing live band karaoke.”

Before San Fermin, Kaye considered singing solely a “necessary byproduct” of desperately wanting to play music, but not as a true catharsis in the way songwriting was to her. Even when she first started with the band, she’d have conversations with Ludwig-Leone about her doubts doing his music justice. That all changed with the release of Jackrabbit, the band’s sophomore attempt and Kaye’s first opposite co-lead singer Allen Tate’s bass rumblings. An illustrious fantasia of moody ballads and baroque extravagance, the young singer’s powerfully dynamic vocals not only fit the mold of Ludwig-Leone’s visions and the star-crossed companion to Tate’s voice, but also signaled her coming of age as a singer.

“I don’t know if I felt a hundred percent confident as a singer until I joined San Fermin, and it was such a blessing to be in this band that toured so athletically, five weeks at a time–it really whipped my ass into shape,” she says with a chuckle. “To not focus on the writing and to only focus on being a singer really helped me rediscover what that truly means and how I could best use this instrument. Ellis is so familiar with my voice at this point that he’s able to really push me and explore parts of my range that I had not thought to use before–and it certainly influenced how I wrote for myself afterwards.” 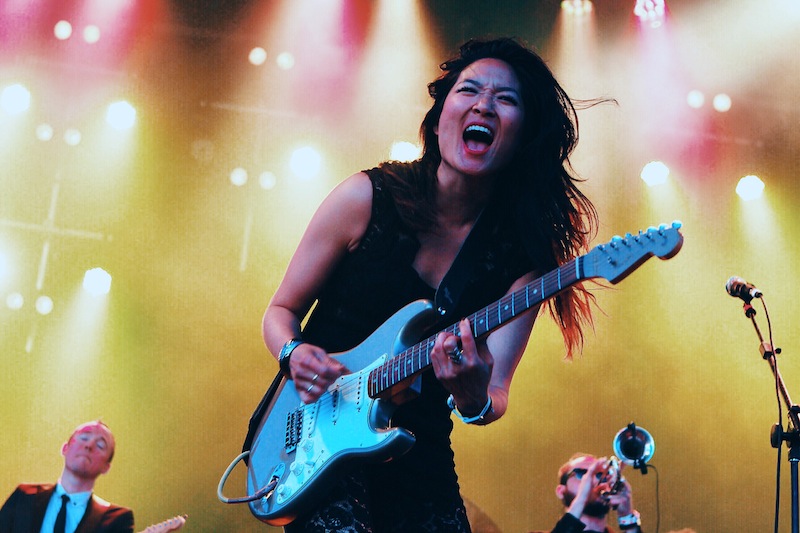 Yet, Kaye always had a love for singing, she just never felt she was good enough at it to do it exclusively. From Michelle Branch to Jenny Lewis, she mentions that she recently stumbled upon old recordings from her teenage years of her covering dozens of singers she admired and looked up to for their vocal prowess: “I think that’s a natural part of finding your voice as a musician, you listen to other people and you try emulate them as best as possible.” Moving forward with San Fermin, Kaye pushed herself and found herself pushed to the edges of what she thought she was capable of. Her furious obsession with music and the band’s hectic touring schedule was both a source of anxiety and zeal, she even reminisced about a specific show they did in which she found herself crying onstage.

[pullquote align=”full” cite=”” link=”” color=”#FF78FF” class=”fistclass” size=”15″]“I’ll tell you a story that’s not very happy, but it’s going to be funny. We were playing in Santa Ana and we’d gone something like eighteen days without a day off, so we were so overworked, so underslept, and had spent way too many hours in the van. I was so exhausted that when I got onstage I just started crying–we were in the middle of a song and I just lost it,” she says between laughs. “All of my bandmates knew instantly something was wrong, but I managed to fake it enough that the people in the audience didn’t really think twice until the next song, which was super intense so I threw all my exhaustion into that and it ended being a pretty great show.”[/pullquote]

After San Fermin, Kaye found that the creative slump she’d been in after Animal Love had somewhat dissipated in the face of all the new experiences and relationships she’d formed while touring with the band. From working with Ludwig-Leone to conversations with Tate, she found previously unknown inspirations and points of relatability that she eventually transferred to her solo material.

“The music of San Fermin itself is so challenging and it really fulfilled that part of my brain that loves very athletic, beautiful, and intricately written music. Part of what drew me to the music was that Ellis and I are both huge Sufjan Stevens fans, and when I was first learning how to arrange music I was so drawn to that overblown, grandiosity that you can find in his music and arrangements,” Kaye explained. “Going back to my own music after San Fermin, I realized how much more I had to say because of all these new experiences and relationships. So this EP truly reflects that period in my life, and it’s about my rediscovery of myself and a new perspective I gained after essentially mining my psyche for different observations.”

Back in the studio, Kaye began to put together all the writing she’d done on the side during San Fermin’s extensive touring, trying to reconcile all the seemingly opposing aspects of pop, rock, and hip-hop that she so admired. Her newest single “Honey” is an uncompromising and surprisingly cohesive mixture of her take on all three genres, full of all the heavy guitar riffs Kaye is so fond of (including a teasing, melting solo), inter spliced with heady, glam-pop shouts, rap spitfire, and slugged-out beats.

“Sometime I’ll sit you down and I’ll play you all five different versions of ‘Honey’ that existed before we landed on this one,” Kaye says with a loud laugh. “I was listening to a lot of pop music, but also to a lot of hip-hop and rock, and I think this EP was about blending all those styles. I love playing guitar, but there’s not much of stage for guitar hip-hop and pop, when you listen to pop music it’s so computer based around synthesizers–so we made a conscious decision to keep the drums with an electronic feel, but mix it with the live feeling of guitar. I was listening to a lot of Sleigh Bells, a lot of shouty-rock, 60’s doo-wop.”

Kaye’s time in San Fermin shines subtly through much of the single. Her time with Ludwig-Leone has no doubt pushed the 29-year-old to more adequately embrace her vocal capabilities, which at this point seem limitless, as the instrument that it is. At the same time, while Kaye’s always been an outlier when it comes to genre categorization, she’s seemingly taken a page out of San Fermin’s compositional complexities and molded them flawlessly for her own use.

Reborn and revitalized as KAYE, her Honey EP is out August 19. KAYE will perform at her EP release show at the Mercury Lounge in New York on August 18. 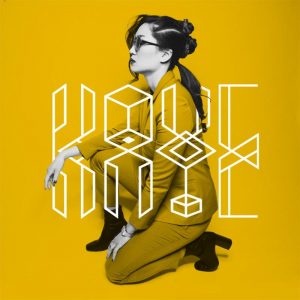