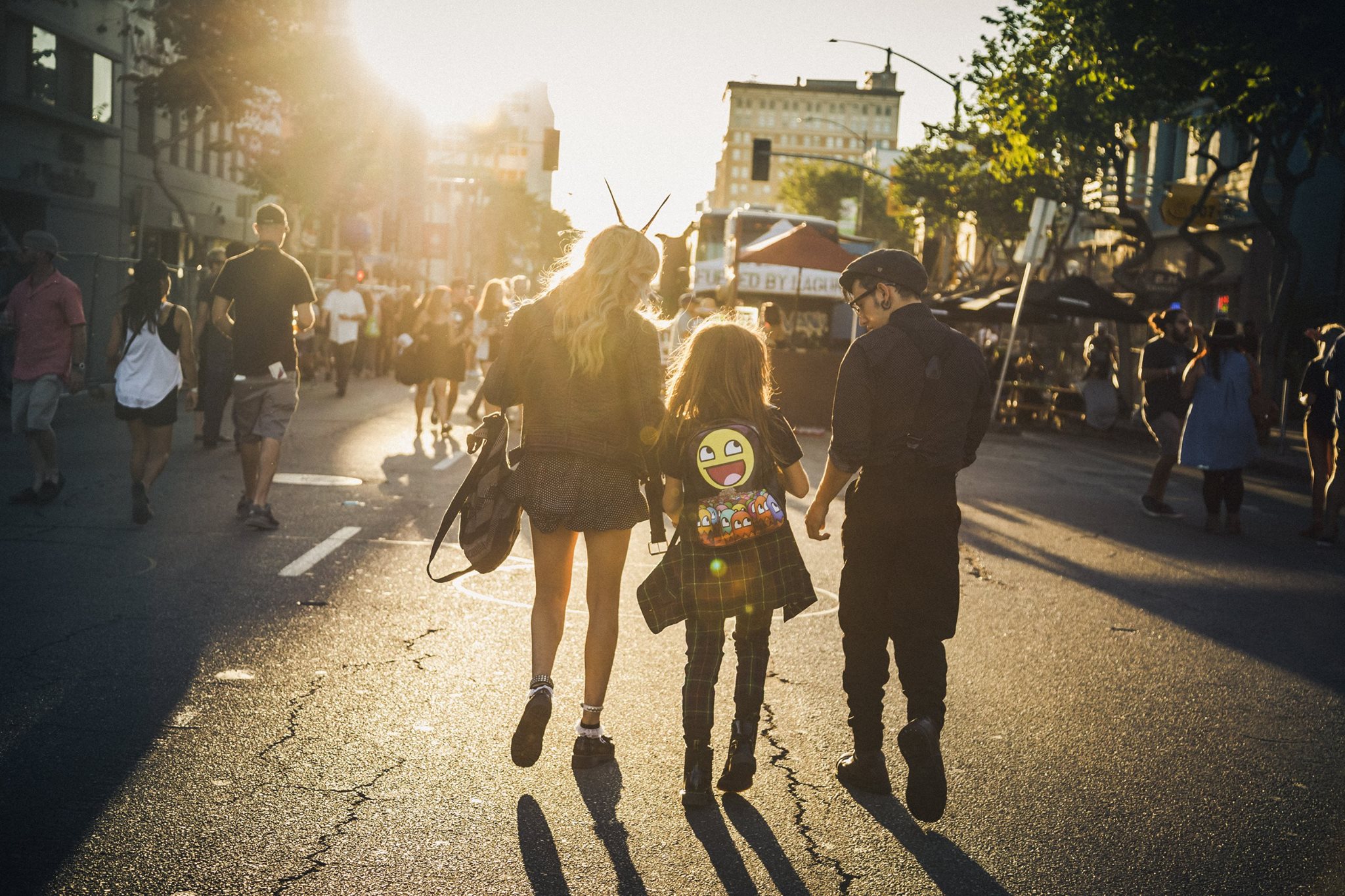 The week leading up the to inaugural Music Tastes Good Festival was unsettling and exciting. My 5’2″ self was about to experience an array of up-and-coming L.A. and Long Beach acts, as well as some notable heavyweights in different genres.

Before I continue, I’d like to point out how every person I encountered was nice and welcoming. I have never had any ticket booth person smile at me, let alone ask how I was doing. If anyone accidentally bumped into me, their apology was too sincere! The vibes I received were a reflection of how everyone was happy that the anticipated festival was finally here.

Saturday was a hot day, but ironically the Solar Stage had the most shade. The smell of sunscreened babes was in the air as I stood to watch my first act of the day, Rudy De Anda. The Long Beach native has been on the music radar since his debut release last year, Ostranenie. Backed by three other members, Lily Stretz, Alfred Hernandez, and J.P. Bendzinski, De Anda danced around the stage feeding off the plethora of photographers waiting to capture a move. A pleasant surprise was Chicano Batman’s frontman, Bardo Martinez offering some keyboard strokes. Adding a personal touch to the performance was De Anda shouting, “I got arrested at Acres of Books!” referring to the bookstore adjacent to the Long Beach Blvd. Stage. 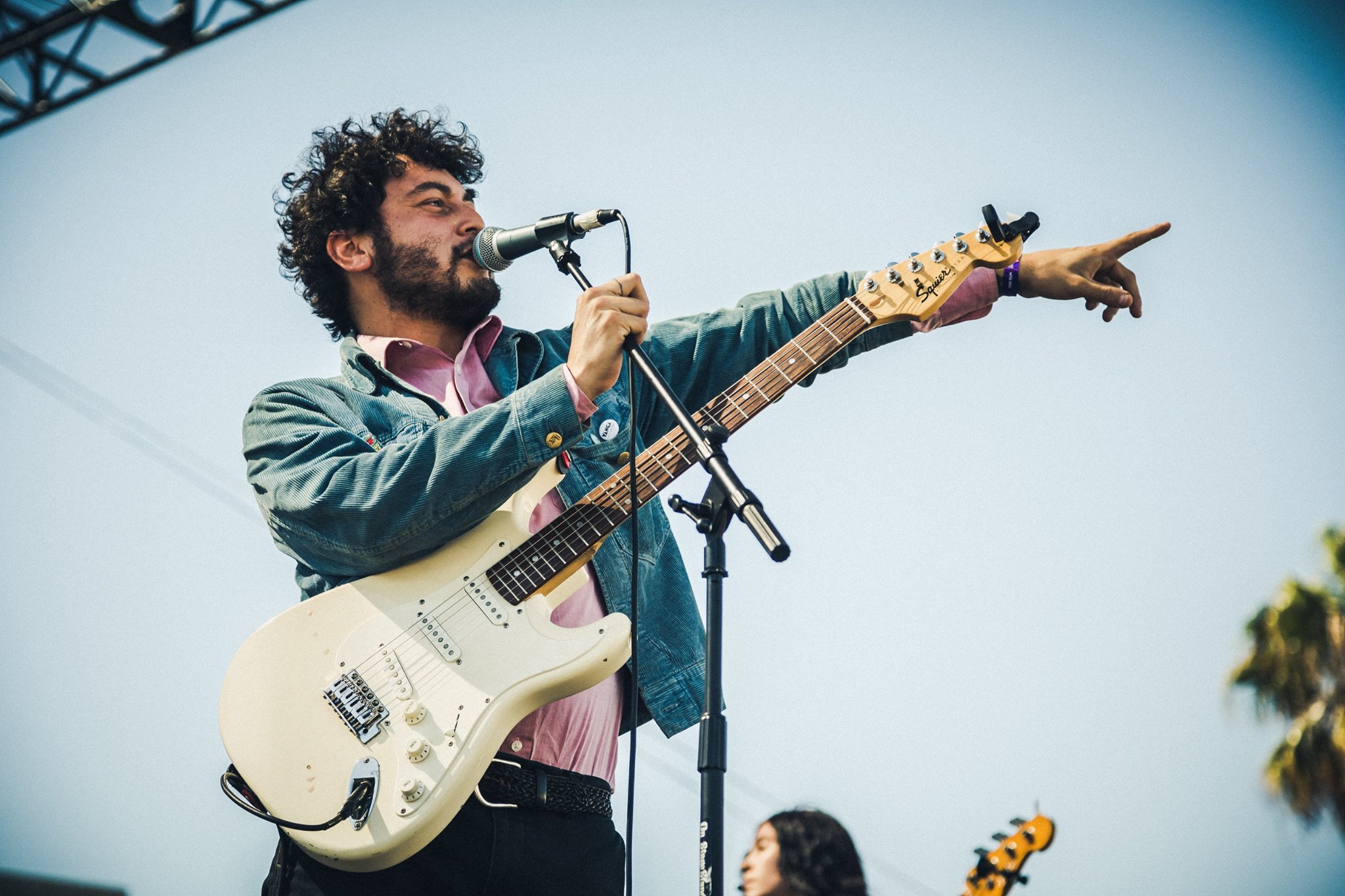 In between sets, I took some time to explore a little, noting the bar, the huge section of porta potties, and the food. A couple of interactive art installations by local Long Beach artists were scattered throughout the venue grounds. A kinetic ferris wheel decorated with umbrellas, a couple of tetris light-up blocks, and a wooden temple space holding plaques of personal observations lined with bells any person could ring. What I did not expect to see was the Long Beach Symphony’s set up for an Instrument Petting Zoo. What! Without this addition, I would have never touched a violin in my life let alone the triangle.

While waiting to see Los Masters Plus, the L.A. based band machineheart had me singing along with frontwoman Stevie Scott. The incredibly catchy “Circles” left me wanting to hear it “one more time”. Los Masters Plus walked onstage a little over their set time sporting thick mustaches, cowboy hats, and a pair of gold chained sunglasses. Known for their outrageous mix of rap, cumbia. hip hop, and electronic music aka  “cumbiatronica”, I was reminded of last week’s Mexican party minus the cervezas. Sadly, their set was cut off way too early, but that did not stop them from showing us their hip shaking dance moves. The crowd could not help but to dance and laugh at the silly persona of the duo.

Another artist that had the audience laughing and bobbing their heads was Open Mike Eagle. The Chicago native spewed out lyrics like: “Never buy weed from a guy named Mortimer”, and “I saw Jesus taking a selfie and I photobombed/And dude better tag me”.

On my way to find food, I was so excited to randomly stumble across Jam In The Van, a YouTube channel featuring an array of artists that well, get to jam in a van! Nick Waterhouse was next on the schedule, taking a couple of selfies with fans (I missed my chance) before walking up the small red carpet. Two screens were set up for an all around view of the small space. A couple of bean bags and folding chairs were available for anyone wanting to sit around the galaxy decorated van. A group of older folk were smiling in amazement at the concept of the whole thing, and could not stop pointing out to each other what they were witnessing. 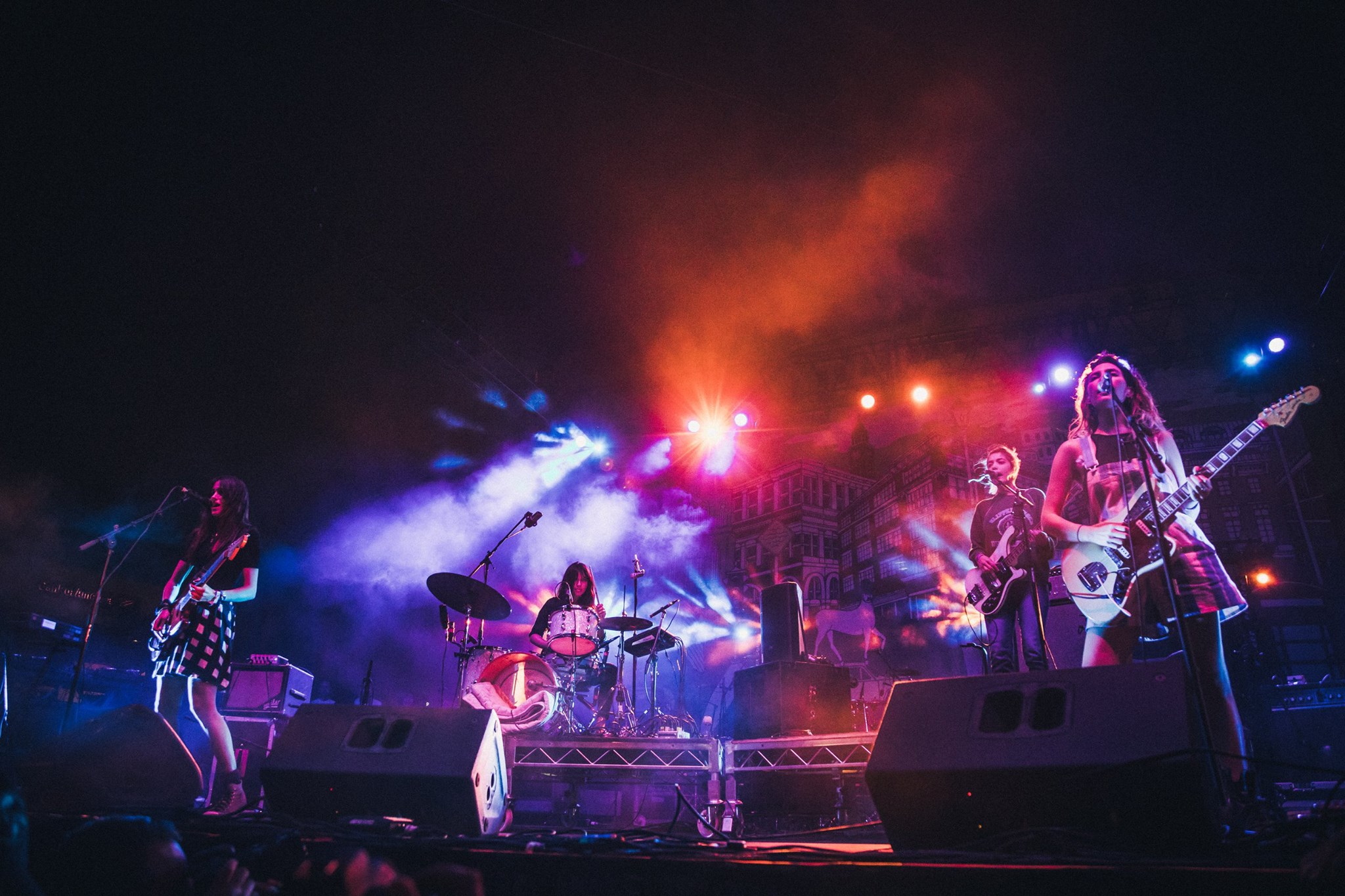 Seven o’clock came by where I found myself near the middle of the audience as the all-female band Warpaint came onstage. This was my first time seeing the band, but definitely not the case for most of the audience. Their live performance had a different effect on me given the nature of their songs. Almost every song had the crowd dancing and possibly the first time I saw a lot of guys feeling themselves – enjoying the performance more than their girlfriends. Towards the end of their set, the band played the fan favorite, “Love Is To Die”, and debuted their latest single, “New Song” that had the audience dancing uncontrollably. The set ended with “Disco//very”.

Dr. Dog was up next. Honestly, the only two songs I knew were their chart toppers “Heart It Races” and “Shadow People.” For many, I’m sure they could disagree. Song after song, the whole crowd sang along with the band, going crazy for “I’ve Just Got To Tell You.” Undoubtedly, the band left the audience with hoarse voices. Near the end of the set, the band played “Bring My Baby Back” off their latest release The Psychedelic Swamp. 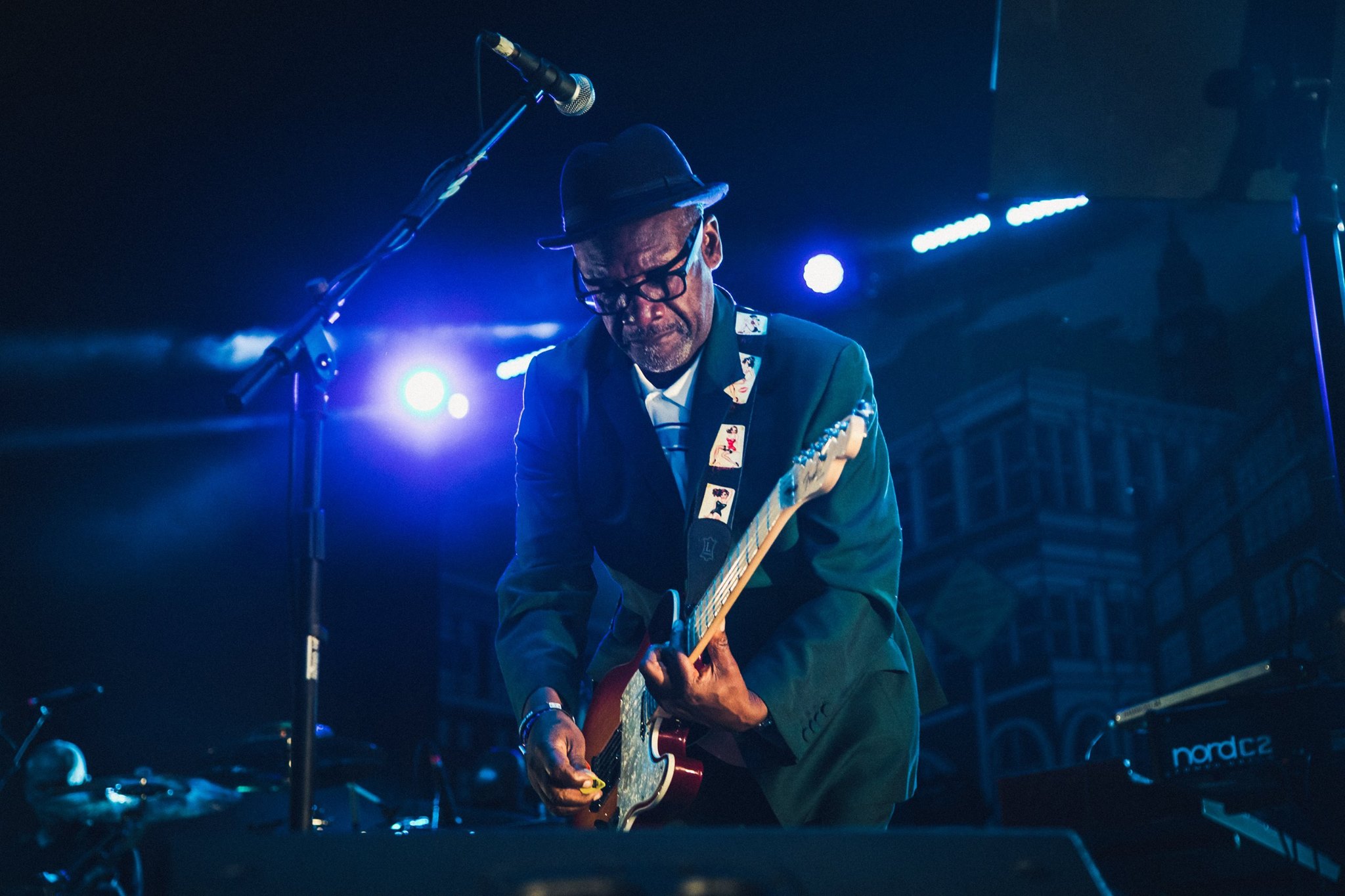 After Dr. Dog, the audience became smaller and a lot of older folks crowded around wearing the UK ska band’s anniversary tour and song lyric shirts. If you think back at a time where you felt so happy you could cry then you know how I felt throughout The Specials‘ set. Being part of the East L.A. ska scene, probably every ska kid’s dream involves seeing the legendary band. The audience eagerly waited for the first sight of lead vocalist Terry Hall as the soundcheck crew adjusted mics. Immediately the crowd clapped in excitement when Horace Panter and Lynval Golding hit the stage. The band opened up with “Ghost Town,” followed by “Do Nothing.” Lynval Golding announced it was skanking time when “Rat Race” started to play. At one point, Golding made the statement that “Black Lives Matter” and “Mexican Lives Matter” before mentioning Donald Trump. Their response to the political candidate was “A Message To You Rudy”. As I looked at the people in front of me, I spotted a man wearing a full-on rudeboy ensemble, nearly elbowing a little girl as he skanked away. I realized I had been nonstop smiling the whole time and was a little concerned that I may have started creeping people out at this point. The energy each member from the band gave off was so contagious, there was no holding back. Never had I witnessed a crowd of fifty-year-olds dancing for longer than 30 minutes, laughing, recording, and letting loose. This was a band of their youth. They sang to The Specials on their way to school, in the back of their car, and the parties they attended.

To see the The Specials perform was a timeless experience. Sure the majority of the crowd was older, but for the millennials experiencing this moment, we were all taken back 30 years. The Specials closed out their set with “Doesn’t Make It Alright,” “Little Bitch,” “Too Much Too Young,” and a farewell goodbye with “Enjoy Yourself.” Was I crying at this point? As someone loudly expressed, this passing moment was indeed better than sex.

Honorable mentions:
Shoutout to the Tacos, Burritos, Nachos stand. If it wasn’t for your aguas frescas and not-skimping-out-on-the-cheese nachos, I don’t know how I would’ve survived.