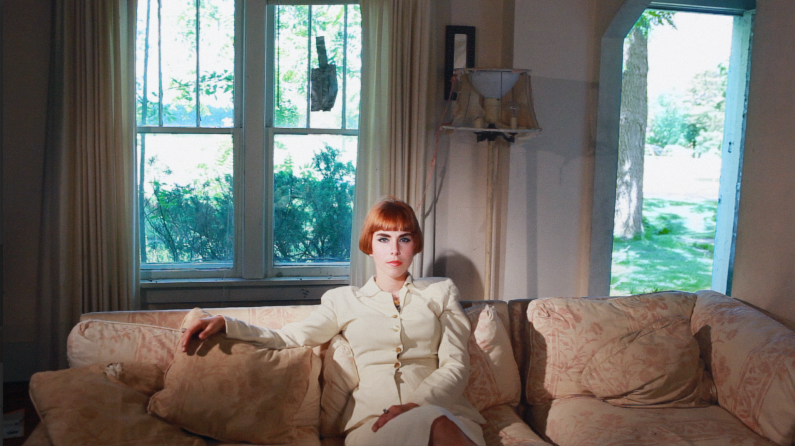 Brooklyn-based René Kladzyk calls herself a child of NAFTA (North American Free Trade Agreement). When she was nine, her father’s auto industry job was relocated, moving them from Michigan to El Paso, where he met her stepmother from the neighboring Ciudad Juárez. Her childhood largely informs her music — her abandoned Michigan home was used as the setting for the video for “With the Fire” and she wrote many songs while doing her master’s research on “how fronterizo (borderlander) identity was changing in the context of violence.” But on her debut album, her story is not so straightforward. Instead, Kladzyk adopts the moniker Ziemba and sings in what she calls “dreamworld double-speak,” weaving emotional poems around real feelings.

The singles leading up to the release of Kladzyk’s debut LP, Hope is Never, were bewildering. They ranged from an a cappella cacophony to a joyous rendition of a 1969 psych folk doomsday prophecy. The lyrics lament, but the music celebrates, and the intersection of the two intrigues.

This album was arguably born in El Paso, while she was exploring what it meant to be fronterizo in a time of turmoil. In a recent interview with Kladzyk, she explained that the track about the Texas metropolis in fact refers to its sister, Juárez. “I witnessed firsthand the transformation of that city,” shares Kladzyk, describing the eruption of violence in the late nights that the world largely ignored. The song “El Paso” is a mythical hell, sung with an omniscient ferocity.

“El Paso buried under red hot lava, blazing brimstone, hollow every syllable,” the song goes, spun around a rhyme and syllable structure similar the complex equations Joanna Newsom wrote out for the scheme of “Leaving the City.” Guitar riffs swirl like a Western ballad as blazing brimstone encircles us, but the final line of “El Paso” leaves us with something to cling to: there is “virtue heard through battlecries.”

It’s moments such as these littered throughout Hope is Never, that give a glimmer of the very thing that Ziemba seems to want to convince us does not exist. Most are small addendums on songs such as “El Paso,” or acknowledged visually, as in the wonderfully joyous video for “Rapture,” despite that track being very much about the end of days. But “Tiger Woman” doesn’t compromise; it is wholly empowering. “I run because I feel like it!” Ziemba cries, optimism and authority abound. But just as we saw the limits of grief in “El Paso,” there is an audible sense that this inner power also will not last. Toward the end, her vocals become strained, the melodies all spin out of control and we are caught in the middle. Was our power only fleeting?

This leads us directly into the album’s namesake, the titular pain, “Hope is Never.” It meanders, a contemplative relief from “Tiger Woman,” but also feeds from the final moments of catastrophe of that preceding track. Rather than turning to external notions of worth, Ziemba turns inward, reflecting on the what-ifs of the past and how things today might be different. “I wouldn’t mind holding to some vow,” she sings, harkening to a failed relationship which is also present in “With the Fire” and “Where Without.” But vows are not just for marriage. They are commitments with great magnitude, inherently spiritual. The suggestion that she wishes she could hold a vow is enough to prove the capacity of our souls to move on from tragedy, to believe in something again.

The ambling synth on “Hope is Never” leads us into the next song, “Hope is a Fold.” Kladzyk describes the tracks as distorted mirrors of one another, each one twisting an interpretation of the idea of hope. The synth takes on an upward trajectory, almost forgiving the idea of needing an emotional crutch. “Who doesn’t cling when losing love?” In absolution, optimism is restored, and we once again feel in control.

In fact, the album begins with a hymn about the ever-changing nature of emotion. “It Curls Itself” features a choir of Ziemba, singing in harmonies and rounds.

As a sermon to the spirit that Ziemba channels, this song sets the tone for the rest of the album’s journey through grief and recovery. This cycle of loss and joy on the album is based upon real moments in Kladzyk’s life, but it is also universally relatable.

A symbolic fire enters the narrative on “El Paso” in a traditional sense as a brutal iteration of death. Lyrics like “hellfire tiptoe dancing, a buccaneer necromancing” conjure up images of destruction in a universe that we refuse to admit is ours. Yet Kladzyk remarks that El Paso is consistently rated one of the safest large cities in the country while Juárez once had a crime rate ten times that of Baghdad. The juxtaposition is hard to comprehend and Ziemba effectively exposes this sense of hopelessness.

Next, flames appear in “With the Fire,” arguably representative of all phases of the cycle simultaneously and methodically. Verse to verse, the fire turns from birth, to death– then reincarnation. Kladzyk admits that fire was a central image due to its flexibility:

“I love the story of the phoenix, and think that, in considering death, eternity, loss, and our (human) role within the cosmos and the landscape of time, fire as an analogy can accommodate the magnitude of those amorphous concepts.”

But she doesn’t only use fire as an analogy. Kladzyk appreciates fire’s physical power as well, finding beauty in the destruction. She created candles and incense that go hand in hand with the music, intended to be burned while listening to the album. “I loved creating the incense and candles because they encapsulate that creative capacity of destruction so perfectly. Like, I treasure this flower, therefore I burn it to fully express its beauty. And then it becomes a part of me, and both the flower and I am changed.”

This cycle is Ziemba’s opus. She arranged the album with countless double intentions, reversals, and mirrors, mimicking on some level the sheer complexity of our own emotions, but also making sense of it systematically. “’Hope is Never’ and ‘Fold’ are in conversation with each other,” shares Kladzyk. “While ‘El Paso’ and ‘Tiger Woman’ are twins and ‘It Curls Itself’ and ‘Thanatos’ are flip sides of the same life cycle.” Duality creeps into every important moment on the record, through fire, grief, and most obviously of all, hope.

Hope is Never is a great title for an album about grief, but here it proves to be contradictory. After all, it is our celebration of grief that allows us to move forward. Kladzyk took her emotions and channeled them into a meaningful body of work that helped her to do just that, but that isn’t the only spirit that she has inhabited. Just over a week ago, Ziemba released an EP called LALA, which she describes as coming to her serendipitously. “LALA is not me, and I didn’t set out to write her words or inhabit her psyche,” she told The Fader in a past interview. She described being fascinated by a particular archetype of (evil) femininity, which informed the songs she wrote for it, revealing yet another layer of Kladzyk’s own complexity. Stream the EP below.

More than anything, Ziemba’s music proves that we can still make sense of our human condition. Hope is Never, though born of pain, is a testament to the inherent goodness in our world. As Kladzyk put it: “Within every moment where brutality or abuse is observed, there is an opportunity to see all the kindness, love, and community that floods out in response.”

Ziemba has announced a string of European tour dates. Follow Ziemba on Facebook for more news and upcoming tour dates.

〉〉〉Watch: Ziemba “With the Fire”